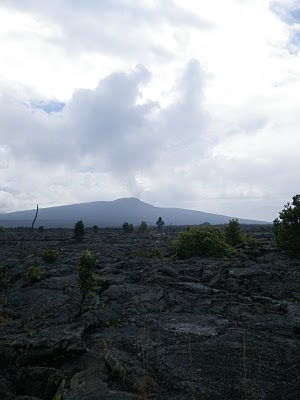 Pu'u o'o is the current active eruption site on the Big Island. Lava has been flowing from this site since 1983. It is just barely within the boundaries of Volcano National Park--which is a fantastic park, there really is so much to see there. (Lucky them, that the Island kept the current flow in their boundary). In the picture, the peak of the hill in the background is Pu'u O'o.  And while it was a cloudy day, that is smoke coming out of the top of the peak.  To hike out for a view of Pu'u O'o from with the Park, is a 9 mile hike.  Our book told us about a trail outside the park that is only 4.5 miles, ending about a mile from the volcano, with a clear view over the vast cooled lava field. ( you can see all the growth that has occured since lava flowed over this field)  When we arrived at the trailhead, there were a couple of signs stating the trail was closed due to dangers in the area.  There was a phone number on the sign (see picture below), which I called, and the lady infomed me that the trail was closed to not go on it, it was dangerous, too many people needing to be rescued. 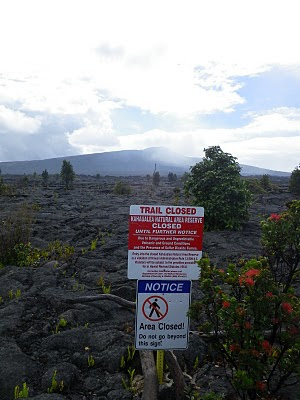 We had heard from our accomodations and I had read, that people get lost on this trai, so we had come prepared with GPS radio that maps our trail.  We marked our beginnig point and started our hike.
The trail passes through a beautiful rain forest.  The trees and plants were just amazing in color and size.  In addition to the amazing rainforest it was nice to hike through a forest and not have to worry about snakes or vicious animals on the trail.  There are no snakes in Hawaii and the most viscious animals are wild pigs and cows.   It is amazing to hike through such luscious scenery to end at such a barren lava field.  Halfway thru the trail there was another set of signs stating that the trail was closed, to not go any further.  But we pressed on. The trail was nicely groomed, I really didn't know how people could get lost on it.  Then we reached the end and found another set of the same signs.   My guess is that people actually venture across the Lava field to get a close up view of the Volcano and either get sick from the sulpher gas in the air, or really can't find the signs and trail back.  We were happy with the view from the end of the trail--It is an active volcano and we weren't interested in tempting it.