Day 3 brought us back to Volcano's National Park for more fun.  It really is a great park.  We were glad we were staying down on the south point of the Island because we were within an hours drive of the park that we could spend a day and a half exploring it.  Had we been staying in Kona or Kohala we probably would have only spent one day exploring this part of the Island, and there is just so much to see.

On Day one we had driven around the Kilauea Caldera as far the park would let us, they have part of the Caldera (the part you can drive thru) closed off due to high volcanic fumes, but the views off the road are amazing.  So on day 3, we drove the other direction on the road to see Kilauea Iki Crater.  Also amazing.  We hoped to have time to hike it later during the day, but we had other plans for the morning.
We headed down the Chain of Craters road with a few stops.  These craters are all areas where lava spewed out and formed cones that have since collapsed or are in the process of collapsing.  We stopped to see some surviving petroglyphs in the area that were carved into the lava rock from when the first people (Tahitians) came to the Island.
﻿﻿
﻿﻿ 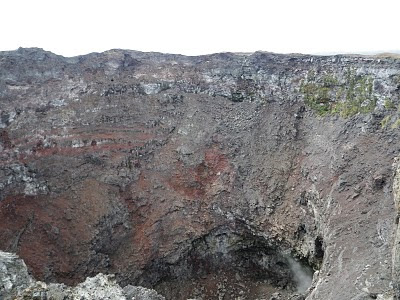 Our next stop was to hike out to the Mauna Ulu Crater.  This crater was an eruption site from 1969 to 1974.  When the lava quit flowing here it was left to be 400 feet deep and 600 feet across. It still steams from ground water and the heat below. The hike out over all the rivers of lava tubes was incredible.  The ground all around the top of the cone was quite fragile.  We wanted to peer in, but also didn't want to cause the edge to crumble and fall in.  It was also quite windy up at the top of the cone.  We were able to find more stable areas to allow us to peak down to the were the lava hardened to form the floor of the crater.