So what is in Jensen Utah and where is Jensen Utah?  I bet you are all wondering this.  Jensen Utah is  almost to Colorado in North East Utah.  Dinosaur National Monument is located here, and just a few miles down the road is where David's Aunt and Uncle live.  They were kind enough to host us for a couple of days .

The kids had a fantastic time.  They rode a horse, played over and over on a zip line.  Ran around the big backyard, climbing in the tree house.  It was a favorite stop.  We also enjoyed visiting with David's family and getting to know his aunt and uncle a little better.  His cousin and her family also came by to visit with Sunday afternoon and we enjoyed that as well. 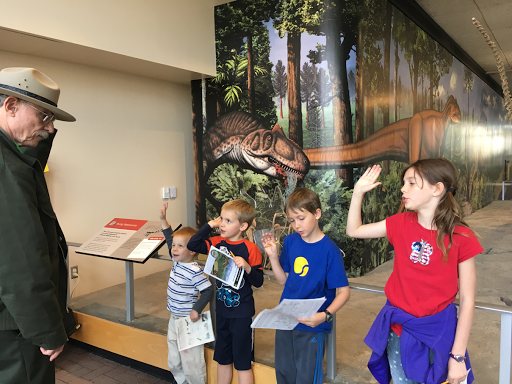 We spent an hour or so visiting the Dinosaur National Monument Quarry.  Here they have hundreds of Dinosaur bones on display and information regarding these bones.  Many of them are still in the rocky ground where they found them.  It was quite amazing to see.  They knew this area was from a particular time frame, over 149 million years ago, so a paleontologist came searching to find dinosaur bones.  After several days of searching and not finding anything, he eventually found a few bones sticking up out of the ground.  Many have been excavated and sent out for displays in museums and for research.  But there are still thousands of bones left in the area.  Many at this Quarry museum.  They believe the area was a river bed that dried up in a drought.  Dinosaurs came looking for water in the river and died there when there was none.  Their bones remained as they died.  Petrified over the millions of years.  It was pretty cool to see still in the rock in a natural state of how they were found.   The kids enjoyed touching some of the bones, and learning about the dinosaurs.  And of course they enjoyed getting a new junior ranger badge. 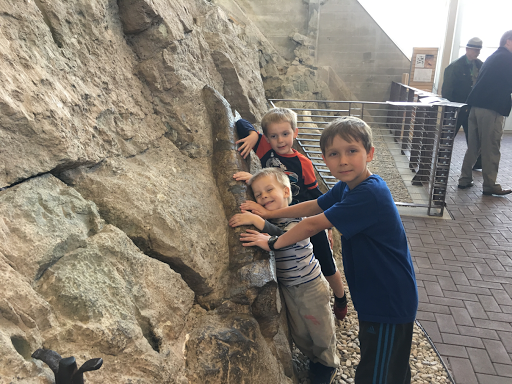