We added in a stop in Seattle to visit the Boeing factory.  Our friends came up to to Seattle for a baseball game and had visited the Boeing factory, and raved about how great it was, so we "planned" it in.  We had never been to Seattle, or Washington State for that matter, before this trip.  Seattle is quite a large city, and unexpectedly expensive for hotels.  Being that we were 7 in number, we were looking at not just 1 expensive hotel room, but 2.  And since we had not planned this part, or the rest of our trip, I was looking at hotel rooms as we drove towards Seattle.  And they were filling up as we got closer.  I should have just booked one and not worried so much about trying to find "a deal" but I was worried David would be upset-- he does not place much value on overpriced hotel rooms, so I put off booking.  This caused some tension and stress (the kids would call it fighting) between us and we went back and forth between even stopping and staying in Seattle. It was too late in the day to even do the tour and drive on, we would have to spend the night and do the tour tomorrow, if we wanted to do it at all.

Finally, we came agreed that we did want to go to the Boeing factory, and David would just have to accept the price of accommodations.  So we booked near the factory and stopped for dinner at a yummy local pizza shop.  In the morning we headed to the Boeing factory. I had prebooked tickets for a morning tour the night before.  They have an age limit on their tours, so Benjamin and Matthew and I hung out in the museum of the factory, while David took, the oldest 3 on the factory tour.  That morning after chatting with Grandma she told me that a family friend works for Boeing, so I contacted him via Facebook.  He indeed works nearby for Boeing and came and hung out with me and the kids, til David and the others returned.  David loved the tour, and was full of questions when he returned, and lucky for him, my friend, Kent had some answers. 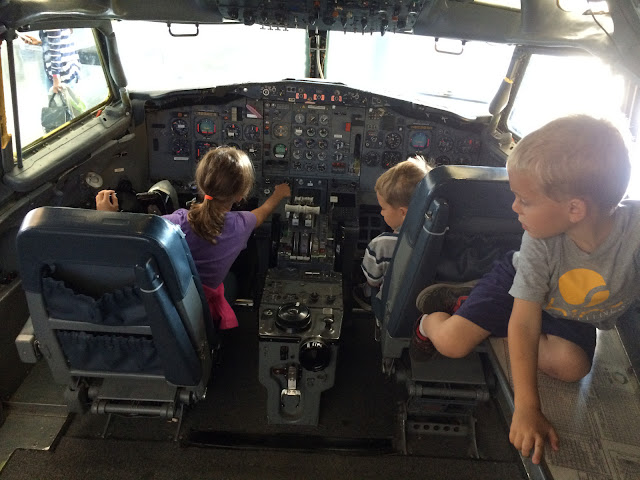 It was definitely a great stop, even with the hotel prices!  Although I didn't get to go on the official tour, David highly recommends the Boeing factory tour, if you're in Seattle.
Posted by The Blood Family