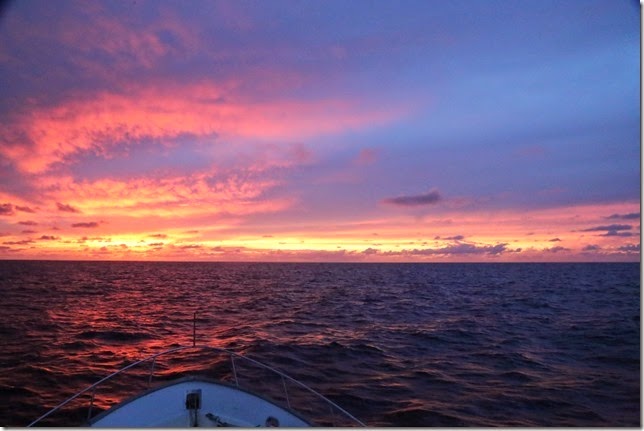 We had been checking the weather on a daily basis and watching a nice weather window covering 2 days from San Juan, PR to Turks and Caicos.  From there it would be easy to day hop thru the Bahamas into the Exuma islands, where we planned to stop and spend 10ish days before heading on to Florida.

And just as we saw in the weather file grids, it was a nice time to leave the Caribbean behind and head into the Atlantic towards the Bahamas.  The winds were light, a few short rainstorms passed by us each day and night, but the waves were on our aft and small with long periods between swells.  It really was a pleasant 2 days…  other than traveling overnight.  I really prefer to anchor for the night and sleep, but that is not possible when passaging between islands that are far apart.  With nothing but the deep ocean around us, we have no choice but to transit overnight till reaching land again.  And while the weather was nice and travelling was good, the engines are loud and the moving boat makes it hard for me to sleep underway.  The kids all sleep thru the night easily underway, but they love to each take a shift helping with night watch.  Since we are underway all night, someone has to make sure we are headed on course, and not going to run into any other boats or ships out there.  So each of the kids take a 2 hour shift thru the night helping out.  I think their favorite part is the popcorn and movie they get to watch with me or dad.  David heads to bed right after dinner and I take the first shift till 10 or 11 pm.  I usually get to spend watch with Benjamin and Isabel.  And then David gets up and starts his shift.  He does a couple hours alone until he starts to feel tired, then he gets Savannah up.  She is 11 and regularly helps with watch during the day.  So she does a pretty good job at night.  We use a timer to check for lights and route every 8 minutes.  During her 2 hour watch David usually lays down nearby on some cushions on the pilot house floor and naps while Savannah watches and can easily wake him if needed.  At 5 am, Melinda starts her watch shift, along with Calvin.  The sun is on its way up then and it is easier to see any boats that might be around us.  Then a few hours later the little kids are waking up and its time for me to get back up and help out.  But since I only “rest” thru the night, not really sleep, the days are long and tiring. Luckily I can rest when the baby goes back down for a nap. The weather really was beautiful both days, so the trip went well. 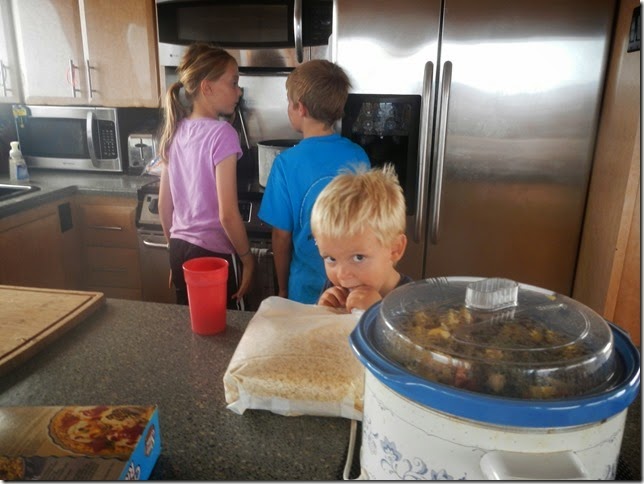 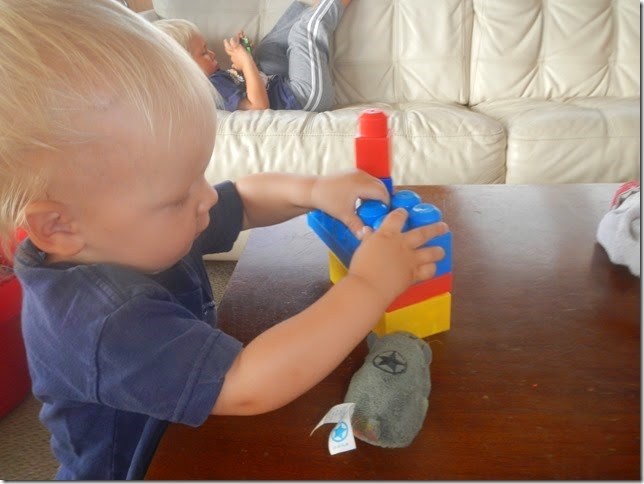 playing underway, it was great weather, so it was easy to move around the boat.

Early the second day, we arrived just off the Caicos bank, from here the waves were almost flat.  The Turks and Caicos islands and shallow bank, knocked down any waves.  We enjoyed a warm day till we reached the north end of the Turks and Caicos.  I was looking forward to stopping and sleeping for the night, but as we rounded the west side and looked for a spot to anchor, all I could see was a small swell wrapping the island and I wanted to cry, because it would mean rocking all night.  David, always looking to go further, proposed we continue on 7 more hours and arrive at midnight at Mayaguana, Bahamas—which was our next stop anyway.  I wasn’t thrilled with the 7 more hours, and I definitely wasn’t thrilled with entering into an anchorage in the Bahamas at night.  Shallow water, with random coral heads is often difficult during the day, so entering at night can be a very bad idea.  After rereading about the wide entrance into the anchorage we decided that it would be safe to do in the dark, and chose to continue on.

Just after dinner a storm with a few rainspouts (tornado like funnels) passed overhead.  We were able to avoid the downspouts until the storm passed over head, and then the setting sun came back out.  We reached the anchorage at Mayaguana just after midnight.  We were able to mark the reef and island on radar and match it up with our GPS to make sure we were on track to enter thru the cut, and not hit anything.  Prepared for the worst, we had Melinda and I checking the dark water looking for white caps, which would indicate land on each side of the boat.  Calvin was up and ready to help if needed.  Savannah had been woken up as well, but asked to stay downstairs with the rest of the sleeping kids.  This way she was ready to help the kids if we needed to get them upstairs quickly.  All that preparation, but we entered quite safely and were soon looking for a spot to anchor.  Inside the anchorage, we headed a little closer to the reef to block any waves and dropped the anchor.  Settled for the night, we finally crawled into bed around 1am to get some much needed sleep.  In the morning we awoke to the beautiful Bahamas turquoise water and white sand.  Always a beautiful sight.