9 short days in the Exumas, part 1

After resting up at Mayaguana, we decided we would make one last overnight hop.  We were 30 hours from the Exumas, so rather than split it into 2 long days, we decided to just go straight there.  The Exumas is a chain of about 100 islands in the Bahamas.  Of all the places we have been, these islands are our favorites, and we were excited to come back for a second visit and enjoy more of the beauty there. 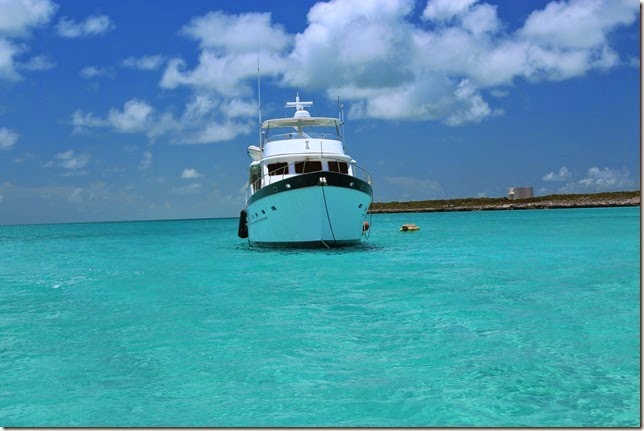 The weather was perfect, and the trip was uneventful.  We arrived mid morning just outside Musha Cay.  We entered the cut from the Exuma Sound to the Exuma Bank on an outgoing tide, and it was crazy how distinct the current was in the cut as it rushed out to the Sound.  You could easily see where the current ran as the water rippled like a river, but amidst the ocean.  It was a strong current slowing our speeds from over 8 knots to less than 5.  We increased our RPMs to  maintain control as we continued to the shallow banks side.  We quickly turned south into our desired anchorage for the day and night.  We picked a great spot, in 8 feet of gorgeous water, a mere 100 yards from the private resort owned by David Copperfield.  They had guests on shore that sped around us on wave runners and jet skis during the afternoon.  Because it is a private island, we did not go ashore there, but we enjoyed the view.  For $37000 per night, you and 12 of your friends can stay at this private island resort.  WOW, the price! But the view is gorgeous. 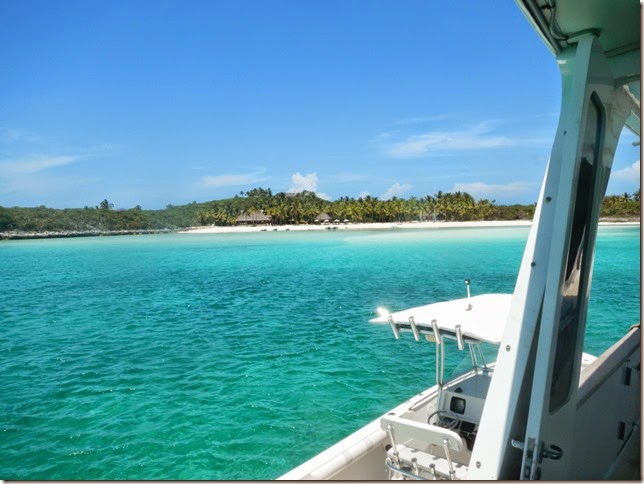 Nearby was a sand bar that appears at low tide, so with low tide being about mid afternoon that was where we headed to play.  The sand only dried in a very narrow spot, but the rest was just a few inches below water, and fun for the kids to play in.  They found a beautiful star fish to examine, some fun shells, and nearby was a  small plane wrecked in 4 feet of water for snorkel exploration.  That night we rested up; our anchored spot was so calm and protected you could hardly feel the boat float. 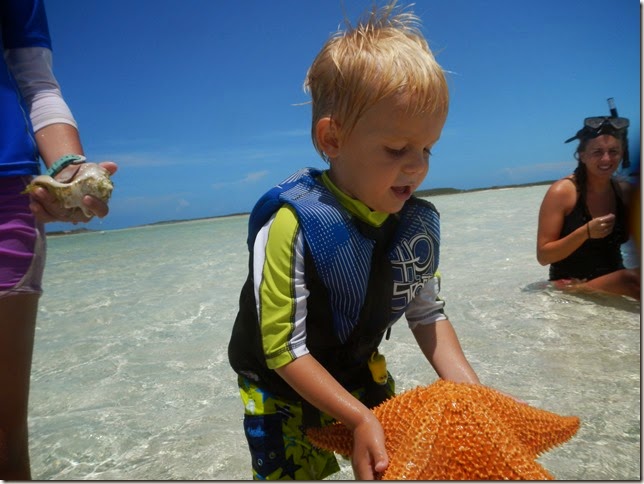 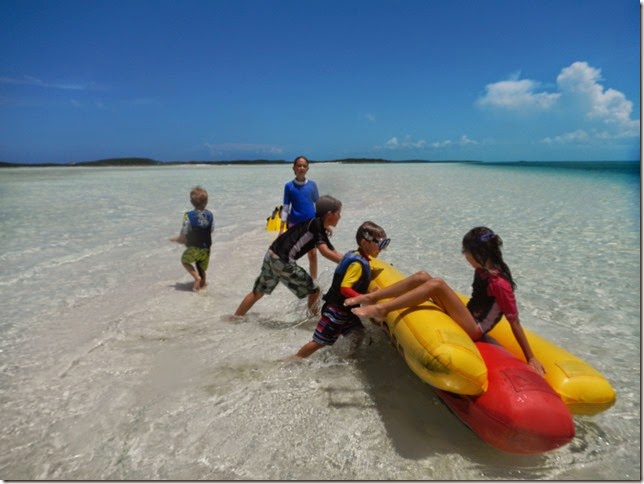 The next day we headed just a few miles north to anchor off of Great Guana Island, and White Beach.  With no one else around, we had the beautiful white sand beach all to ourselves.  We anchored an easy swim away from the beach, with its shallow sand and turquoise blue waters all around.  A short ways out were some good volcanic rocks that made for interesting snorkeling.  The kids had a fabulous day at the beach.  After snorkeling I headed to the beach to relax, and thought I would read my book, but I just could not take my eyes off the spectacular view of beach and water. The colors were so mesmerizing! It is truly one of the most beautiful places I have ever been, and with it being deserted, it just made the day so much better. 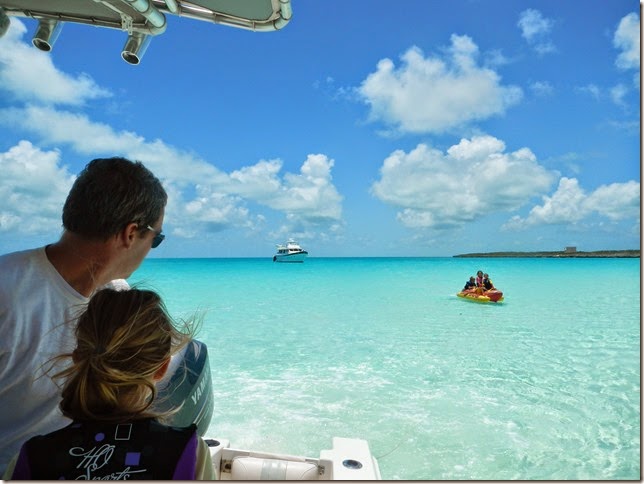 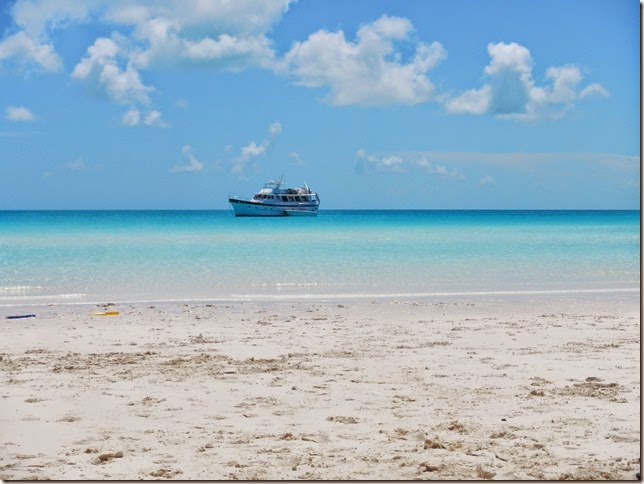 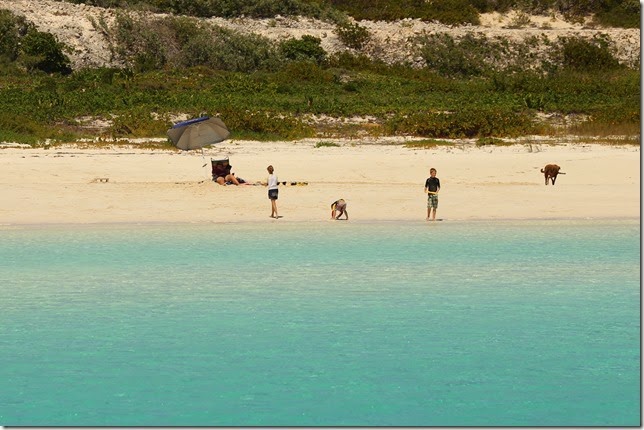 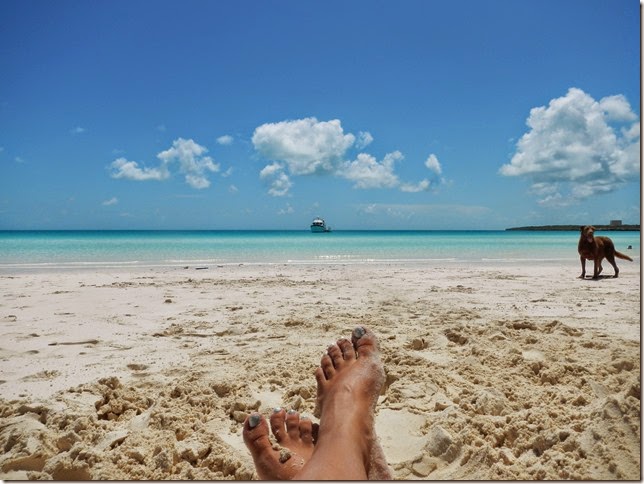 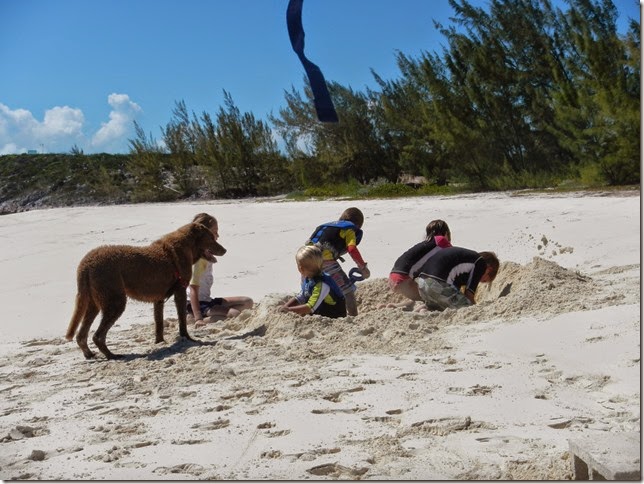 That night the internet quit working, in fact we could not connect to the cell tower at all.  So the next morning David and I headed the few miles around the tip of the island into the small settlement of Black Point, where a few hundred local Bahamians live.  We found out that all the cell towers throughout the 100 Exuma Islands were down and out.  Maybe a lightning strike from a passing storm the night before.  At least one short storm a day was passing by, just a part of spring.  The only form of phone and internet in the small village was thru the cell phone tower, so everyone was hoping it would be fixed within a few hours.  And sure enough by late afternoon, the cell phone tower was connecting and our internet was back.  We enjoyed the rest of the day exploring a few of the nearby beaches, including one that had a few dozen iguanas living on it. 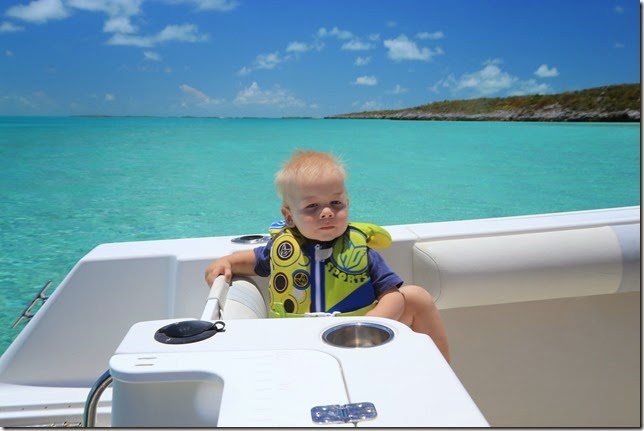 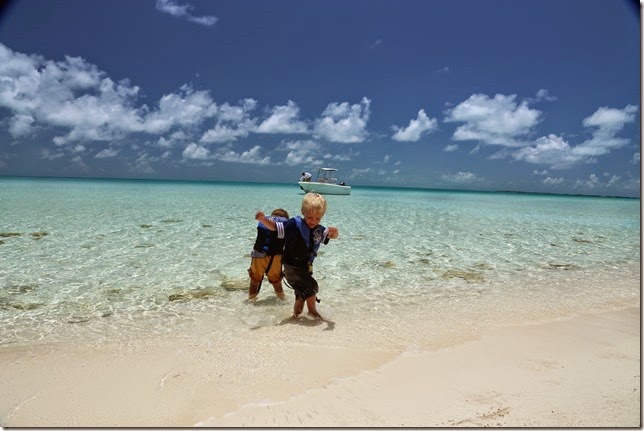 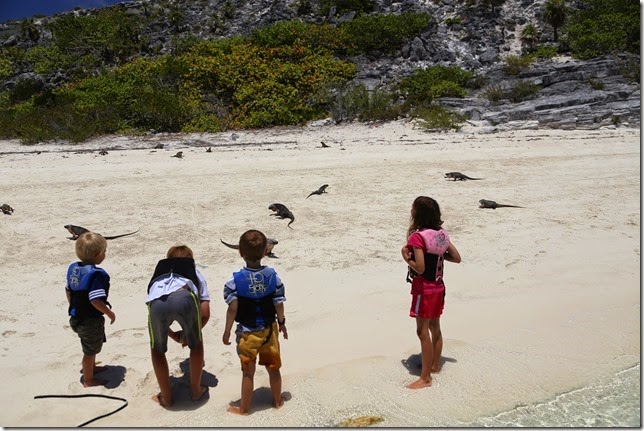 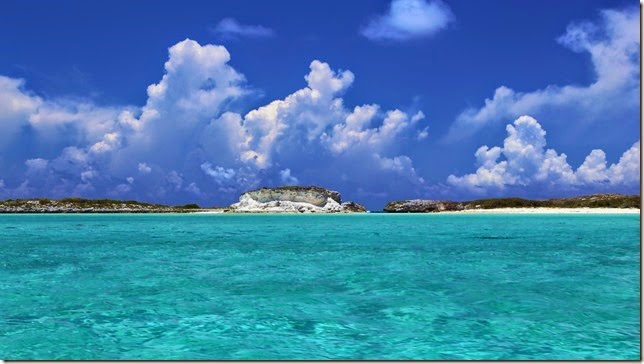 The next morning, in an effort to keep heading north, and due to the slight swell wrapping the island, we moved on to a new anchorage.  We headed to Cambridge Cay, the south end of the Exuma National Park. The anchorage was well protected and calm as could be.  No swell wrapping in there.   However staying on a mooring there is quite expensive.  Next time we think we will just drop the hook at the south end of the moorings.
From here we could make short trips in the tender to see nearby islands.  We spent an afternoon exploring Pine Cay with its numerous low tide sand bars.  It was so beautiful dinging around thru the shallow sands enjoying the gorgeous scenery.  We even passed by a small wedding taking place on a strip of sand at low tide.  We passed by another private island resort, and watched a small seaplane land and unload its passengers.  This resort is only $54000 per night for you and 15 others.  They included transportation from Nassau island to the resort onboard their seaplane. 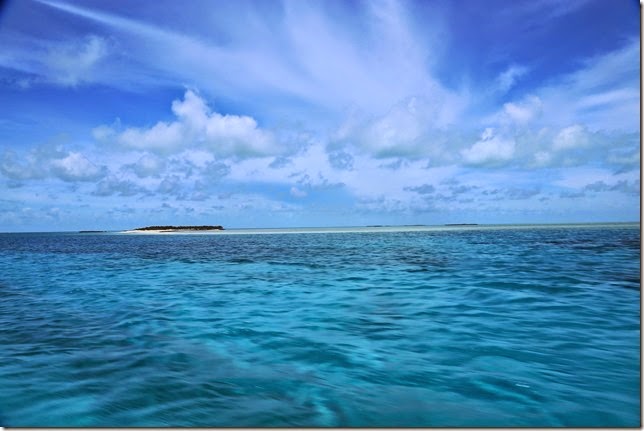 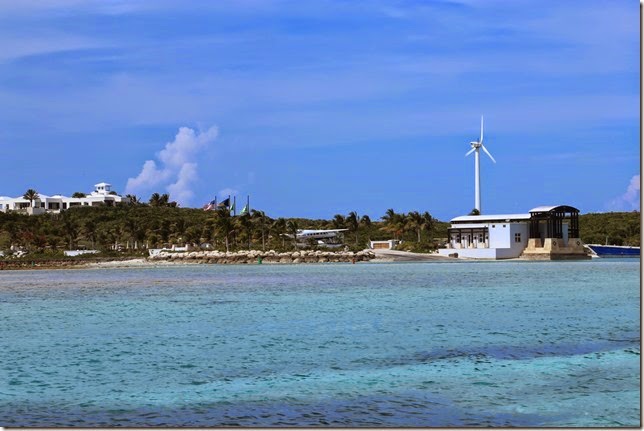 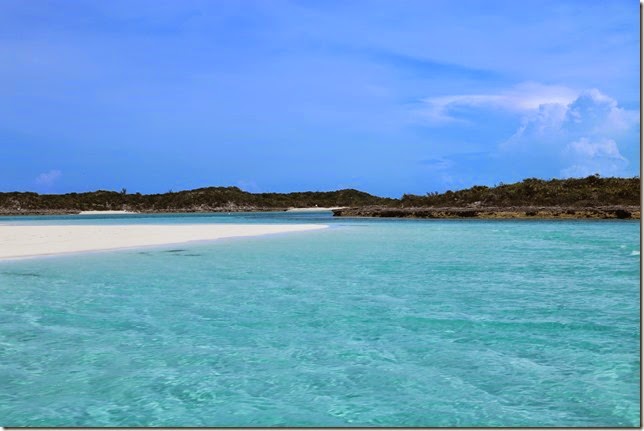 We also made a trip down to Staniel Cay and Big Majors Spot to see the big swimming pigs.  Staniel Cay has a small resort and village that support the boating community that spends winters in the anchorage there and nearby.  They also have regular charter flights from Florida.  We’ll need to find out how much flights are and maybe pick up friends there who want to come, see paradise, and visit us. 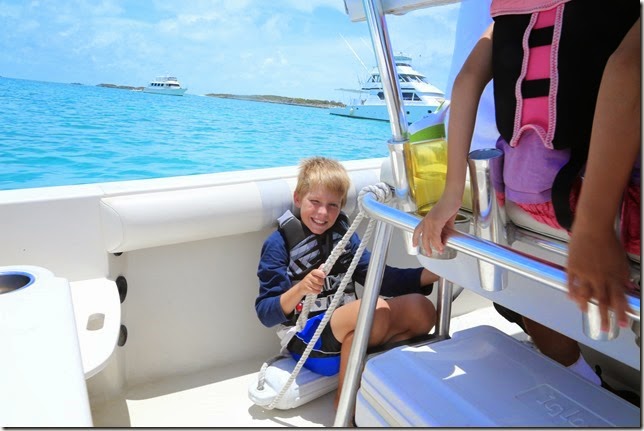 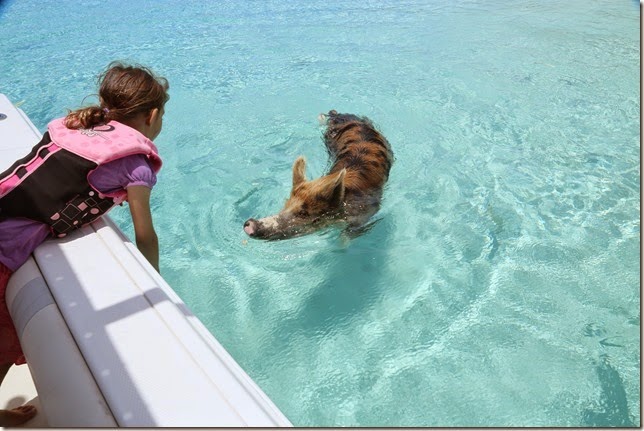 Another great spot in the south end of the park, is the Aquarium snorkel spot, and a few fun caves to swim in.  The Aquarium was just as colorful as the last time we stopped there.  It was the perfect spot to take Matthew snorkeling.  This little grotto is filled with little colorful fish and coral.  The water is crystal clear.  Matthew loved swimming and seeing the fish each time we could convince him to put his eyes in the water and look.  Benjamin had a great time snorkeling on his own there too.  It was easy for him to swim around and grab the rope off the boat if he needed to hold on to something. 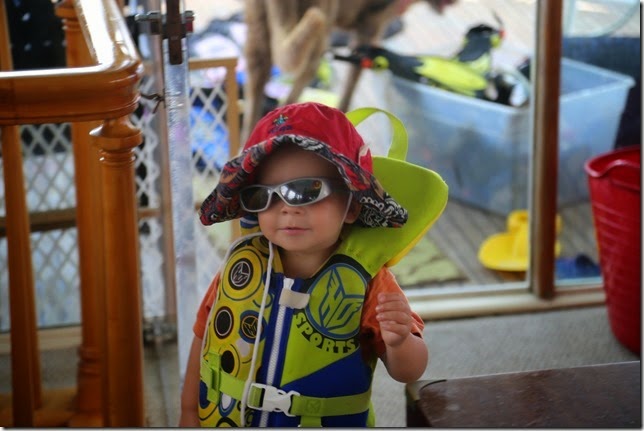