St. Martin/Sint Martin is a well known Caribbean island.  A LOT of cruise ships stop there, many tourists fly and stay a week, and lots of boaters head there as well.  They have tons of boat services and shops for boaters.  We hadn’t stopped there on our way south wanting to avoid the high tourist islands.  But heading north we decided to make a stop there to look at a new inflatable tender.  I was a little worried we’d get stuck there.  Lots of boats get work done in St. Martin, so I was hoping nothing would break or that David wouldn’t decide he needed to get something done there.  But he promised we were just going for a couple days and then on to the BVI’s.  It helped that there was a great weather window for Tues and Weds, so we needed to leave St. Martin by early Weds morning to travel in beautiful weather.

It was only a short couple hours up to Sint Martin.  We anchored in the outer bay on the Dutch side.  St. Martin is split in half with 2 countries.  The North half is part of France, the south half is part of the Netherlands.  On the west end of the island is a lagoon, big and sheltered—probably why boats started coming here, a nice very protected huge lagoon.  To get inside you have to enter by bridge opening on either the dutch or french side.  We had talked with lots of people and read as much as we could, and here is what we gathered.  It is free to go in or out on the French side and then you pay the usual small fee to clear in on the French side.  The opening is more narrow on the French bridge.  On the Dutch side they charge large fees to go in and out, which you pay when you clear in on the Dutch side, along with higher Dutch fees.  The bridge on the Dutch side is quite wider and easier to pass thru with a nicely marked channel.  What we heard was a lot of people go in thru the Dutch bridge, then head to the French side of the Lagoon to anchor.  Since they are staying on the French side, they clear in on the French side and therefore never have to pay the bridge fees.  We read that the Dutch keep a list of all the boat names that pass thru the bridge and if you ever clear in on their side they will charge you for all the times you passed thru previously.  So we anchored for the night in the outer bay on the Dutch side.  Luckily the customs office is closed for the weekend so we had till Monday to decide what to do.  We could stay in the bay, but it was quite rolly.  If we stayed, we would need to clear in with Dutch customs.  Which meant if we decided to go into the Lagoon, we would be charged the high bridge fees when we went to clear out.  Or we could go all the way around the island to the French bay, which could also be rolly, plus the time and fuel to get there.  Or we could go into the Lagoon, and like so many others pass thru to the French side.

Well after a night of rolling at anchor in the bay, we decided to head into the calm lagoon for the night.  We decided to head to the French side to anchor.  It was wonderful to anchor and not move or roll at all.  It was dead calm in the Lagoon.  We’d only be here a night, but it was great.  The water however was icky looking.  It was clear, but green with floating icky stuff in it.  Not a place we want to run our watermaker or swim.

Monday morning we were off to run our few errands.  After towing our hard sided tender for a year now we are curious if we can get the same benefits without some of the hassles with a larger inflatable tender.  Towing in general is a hassle.  It slows our speed by about 1 knot, which may not seem like much, but when your average speed is 7-8 knots, losing 1 knot is a lot.  It is hard sided, so pulling along our boat requires practice and lots of fenders, and of course we make errors, which means scratches and dents.  We just had the boat painted before arriving at it in March, and 2 months later…  we have scratches and dents.  So much for that nice paint job (covering up our old scratches and dents from last year).  And then add a little chop or swell, and it is hard pulling up the tender and getting in and out.  Of course in those conditions a new RIB will bounce around too, it just won’t scratch and dent our boat.  But the one thing we love about our large tender is the distance we can travel in it relatively comfortably and sometimes dry.  And that is what we wonder if we can get with a large RIB.  Can we cover the same few miles in the same kind of waves, comfortably and relatively dry.   Sadly, the conditions on Monday when we went to test drive the RIB were beautiful, which made it hard to tell how well it would do in slightly larger waves and wind.  but it thought it was good.  David didn’t like a few things about it.  He felt the console was cheaply made, and a brand new large RIB is expensive.  But we had done our test drive and can now move on… 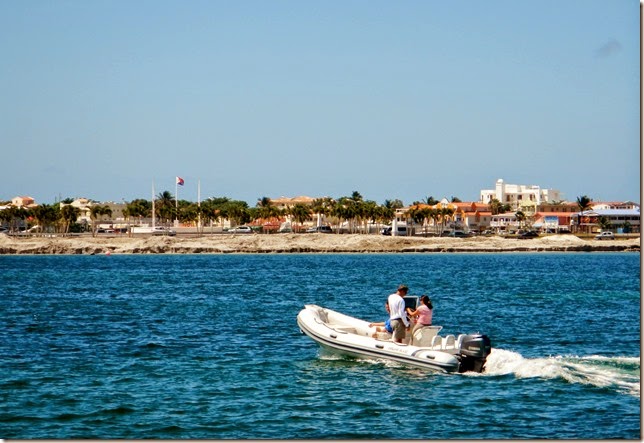 After a quick trip to the grocery store, Grande Marche, we stocked up for the next few weeks.  Prices were okay, better than in previous islands so we were able to really stock on some items, like frozen gr. chicken, and eggs.  One of the perks of this store was the delivery service.  For a tip they will drive you to your dinghy.  It had taken us about 10 minutes to walk to the store, and we had purchased quite a bit for our large family, so the ride back to the dinghy was much appreciated!

With groceries on board it was time to head out of the Lagoon as we would be leaving by sunrise in the morning, long before any bridge openings.  We decided to try the narrower French bridge, as the bay on that side was much calmer than the Dutch side and it was a better spot to leave for the BVI’s in the morning.  With the bridge being narrower we decided Jenn would drive the tender thru the bridge behind the boat rather than tow it thru on the hip, making us narrower.

Before sunrise we were up and off in our awesome weather window.  If only every passage we made good be as beautiful as this one was.  It took us 13 hours to reach the BVI’s, but the water was so calm I made bread while we were underway. There wasn’t much wind, but it wasn’t too hot either.  It was a beautiful day for a long open passage.   It was a long day, but worth the early leave time so we could arrive with plenty of daylight to anchor and get settled in the North Sound of the BVI’s.. 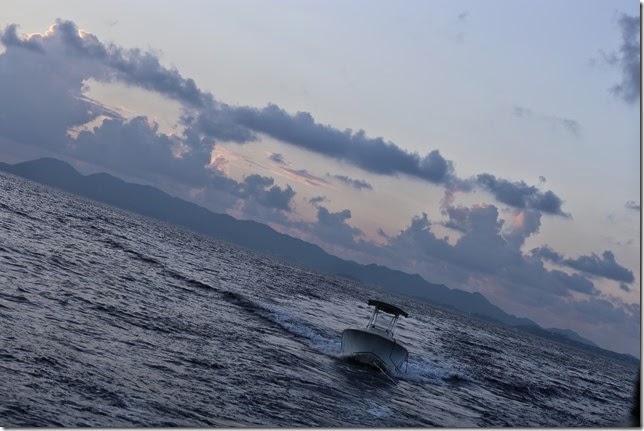