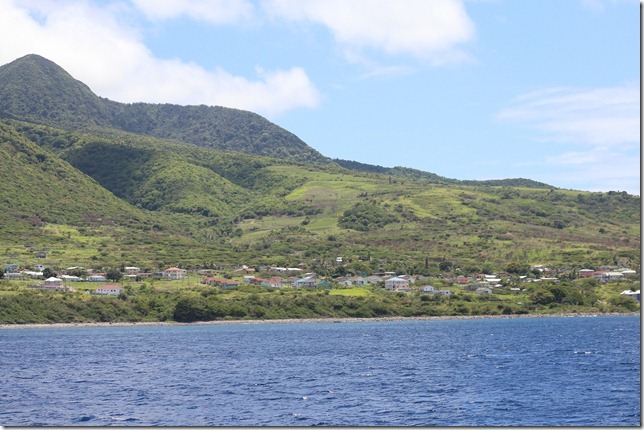 We had skipped diving in Statia because I wasn’t feeling well.  The anchorage there had a swell, so we head further south to St. Kitts where we hoped to find a calm anchorage.  On our way there we decided to pull in to the one and only marina for one night.  This would make it easier to clear customs and get to church the following day. Then after church we would head to one of the bay anchorages just a couple miles south of Basseterre and explore St Kitts from there. 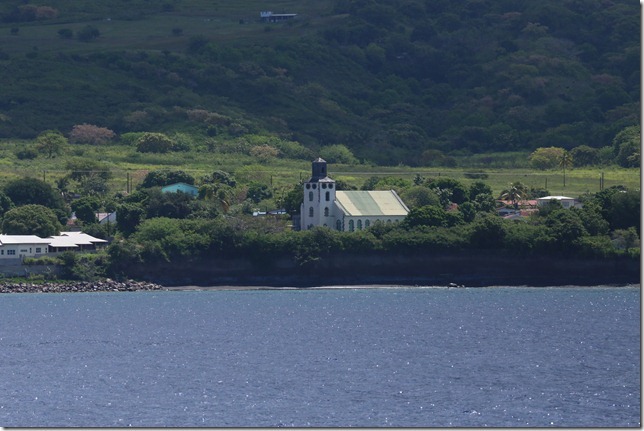 As we headed down the west coast of St. Kitts to Basseterre we enjoyed the beautiful countryside.  It was different from the previous 2 islands we’d been too.  It was larger, but you could see that the Volcano’s had formed this island differently.  Instead of steep mountainsides, we found sloping hills up the mountain.  This, we could see allowed for beautiful plains and farmland.  We also passed the main site we wanted to see on the island – Brimstone Hill, a large fortress on a hill overlooking the Caribbean.  It is a World Heritage UNESCO site and has reportedly been well restored.  We were looking forward to exploring it. 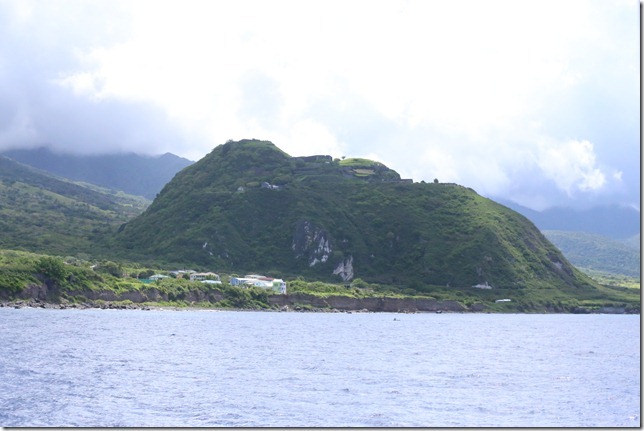 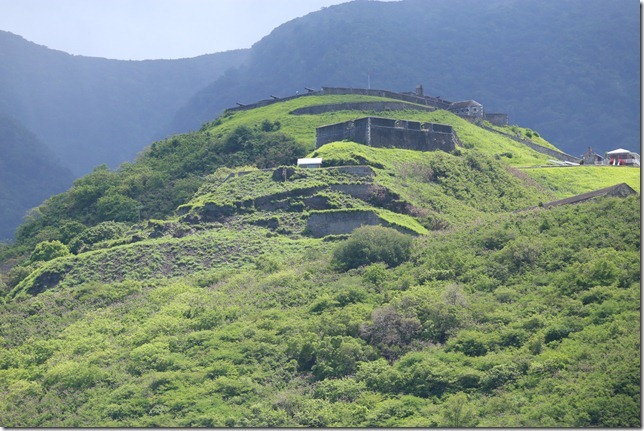 As we neared the marina, we attempted to call them on the VHF to find out if they had room for us to dock, but we were unable to reach anyone there.  We could hear a couple of other boats talking over the VHF and one had stated it was in the marina.  So we radio’d that boat, and they kindly went looking for the dockmaster to ask about dockage for us.  They called back on the VHF that we could dock next to them; they even met us at the dock and helped us tie up.  Very kind!

Once we got settled at the dock, I was feeling a little worse, and thought I would go rest, while David went ashore to check in with the marina office and visited with Customs to clear us into the country.  He returned about an hour later letting me know we were cleared in, and he knew where church was, and had arranged for a taxi to take us in the morning.  Impressive.  I asked if he had walked by the building on his way to customs, or ran into the missionaries? And he told me his story…

After clearing in with customs his last stop was at the Harbor Masters office to drop off the last of his paperwork.  The harbor master wasn’t in, so he was told he would need to come back later.  As he was walking away, a car approached him, and the man inside said “I think you are looking for me”. He was the Harbor Master.  He offered to give David a ride back to his office and then said he would drive him back to the marina when they finished the paperwork.  He asked David what we planned to do while visiting his country.  David said we planned to take a driving tour of the island- see Brimstone Hill, and – go to Church.  He then asked what church we would go to.  This is a small island, and there is only one small congregation of our church here.  We have found in small places most people are unfamiliar with our Church.  So not really expecting him to have heard of the Church before, David replied “The Mormon Church” and the Harbor Master asked “The Church of Jesus Christ of Latter Day Saints?”  He told David he would take him and drive him by the church so we would know where it is. – sometimes finding our church is quite a challenge as the church website does not always have an address in these islands.  This man made it so easy for us, what a blessing!  Turns out he lives 2 doors away from the missionaries of our church.  He also gave us the card of a friend of his, who is a taxi driver and David was able to arrange transportation to church in the morning.

By the time David returned to tell me this great story, I was feeling even worse, and had started throwing up and had a fever.  I rarely get fevers, so I now knew I really am sick.  I told him he needed to go back to the Marina office and find out how much power was because I needed AC.  They told him 50 cents a kwh—translation= expensive, but that was what we expected.  The dockage fee however was quite low for the Caribbean.  My husband generously plugged us into the dock and turned on the AC for me in my room.  That sure helped alot.  The AC and the fact that the marina was calm.  I rarely ever felt the boat move, it was great to not have it roll at all while I was feeling sick. 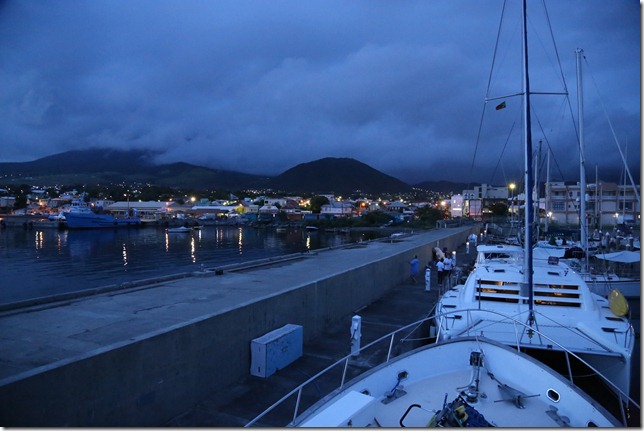 Our 1 night in the marina turned into 6 nights.  I was so sick, and only got out of bed to throw up.  My family was so good to me.  Madison and the girls made sure Alexander was looked after and safe—my biggest worry.  All the kids took turns bringing me water, gatorade, and popsicles.  Calvin made me Jello. David let me run the AC 24/7 in my room.  They made dinner each night, and David even made a couple batches of bread when we ran out.

By Monday I had enough of feeling terrible, and I didn’t know if I had the flu or Dengue or some crazy illness.  So I told David he needed to find me a Dr, that could run a blood test to make sure it wasn’t Dengue or Malaria or something.  We decided to try the ER at the hospital in town. That was an adventure in itself.  There was no order to check in, the patients were left to decide who was next in line to see the nurse for triage. We mainly followed the order of arrival.  The room was all concrete with hard chairs lining the walls.  There was no TV, no modernization at all.  But what do we expect, we are on a small Caribbean island after all.  The best part was the uniform of the nurse.  She was dressed in an all white skirt and top and shoes, with a red belt.  She even had a little nurse cap in her hair- loved it.  I felt like I had stepped back in time to the 1950’s.  I wasn’t sure if it was my fever that was making it all seem like a time warp.  I had to ask David about it later, and he agreed, he too felt like we had stepped back in time.  There was no computer in sight, the thermometer she gave me was an old mercury one.  She did have a newer blood pressure and pulse ox reader.  She hand wrote all the info I gave her.  Then it was back to the waiting room.  While waiting to be called in by the Dr to a back room, the harbor master showed up in the waiting room.  The taxi drive –his friend- had told him we were there, and that I was sick.  He told David we should look for a private Dr. in town.  That the wait would be really long at the hospital.  So he called back the taxi, and off we went to look for a private Dr.  Now, last year when we were in Guatemala I got sick and had to spend a night in a private clinic for a kidney infection and kidney stones while 7 months pregnant. I have no complaints with the medical care I received in 3rd world Guatemala’s private medical center.   I was hoping we would find a similar place, but we didn’t.  The taxi driver told us he was taking us to a good Dr, he use to be the anesthesiologist at the hospital.  He took us to an office in town, it was old, and fit the run down neighborhood.  We walked in and asked the lady behind the desk if the Dr was in.  She said yes, then pointed for us to go down the hall.  We were welcomed into a room smaller than my bedroom closet at home.  The room had a desk, a filing cabinet, and 2 chairs.  And of course a Dr.  He was very nice, asked us to sit, looked me over, and pronounced I had Dengue.  No test to confirm (which a simple blood test can confirm Dengue).  He asked what medications I was taking.  I told him Tylenol and Ibuprofen.  He said “together! No No!”  He then asked how much.  He couldn’t believe I was taking 2 -500mg Tylenol.  He told me that was too much.  I was starting to wonder about this DR.  He wrote me a prescription for the nausea.  We paid our $26 USD for our Dr. visit, and then headed to the pharmacy.  David waited for the meds, and I had the taxi take me back to the boat, I was feeling worse and wanted to just lay down.  I wasn’t thrilled with my attempt at medical care, nor was I convinced that I had Dengue.  David came back with the prescription.  I asked him to look up the meds before I took them, so we would know what they were.  Turns out he prescribed me Dramamine for my nausea.  This is a medicine we have lots of on the boat, the kids use it for seasickness.  How funny.  So I took my St. Kitts Dramamine, and it really helped with the nausea.  David had given me a priesthood blessing a few days before, and I just hoped that I would get better, and not worse.  I didn’t want to go back to the hospital or that Dr.

A few days later I was feeling much better.  A respiratory illmess was creeping in on me, and my fever dropped lower but was still hanging on.  I was better, so I told David to plan an island tour.  The baby and I would stay behind and rest, and they could all go and explore.  See my next post for those details. 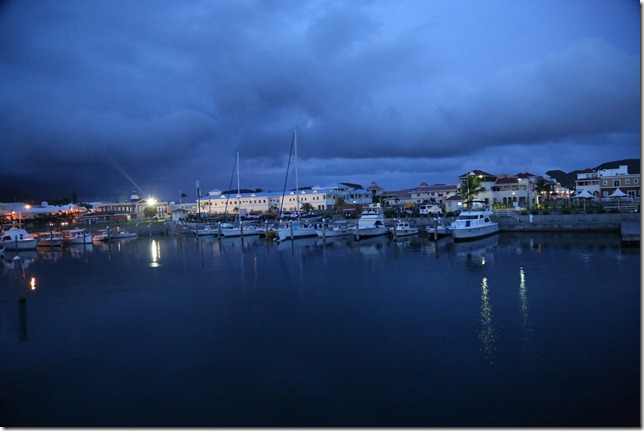 A day after the tour, 6 days after arriving in St. Kitts, we were finally heading out, Sadly all I saw of the island was out the window, other than my short ride to the Hospital, Drs and back.