Montserrat is a small island part of Great Britain.  About 5000 people currently live there.  20 years ago there were about 14000, but then the Volcano exploded, and more than half the island was evacuated.  Most have not returned. 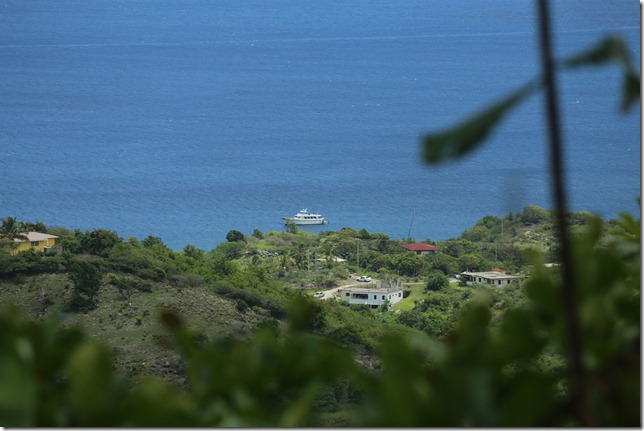 We stopped at Montserrat for one night.  In the morning we headed into the harbor for a tour of the small island.  Our Taxi Guide, Charles, showed us around the harbor village.  There’s not too much there right now.  They are hoping to build a new town center and shopping center here, and someday maybe a resort development and Marina.  Right now, the tourist industry is not very big on Montserrat.  With the active volcano nearby, I’m sure tourists aren’t too interested in investing in resort property there right now. 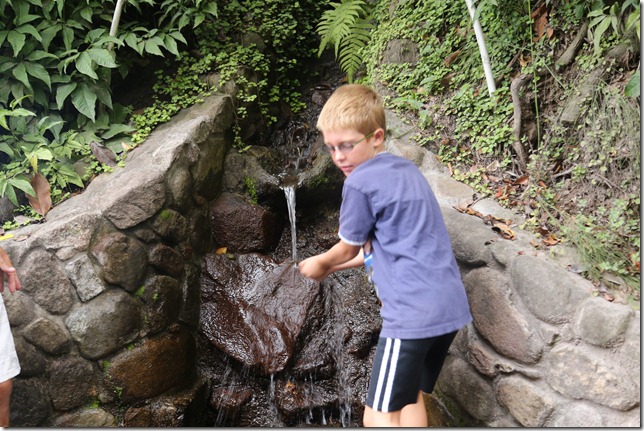 Next we headed up into the hills. Montserrat is quite hilly, so much so, that you can’t even see the volcano from where we were in the harbor.  We stopped at a fresh water spring and tasted the water.  Our guide pointed out fruits and plants along the way that grow in Montserrat.

We arrived at the Volcano Museum, which we knew would be closed, since it was Saturday, but it had a good view of the Volcano and valley below.  Charles pointed out the “gut”--  a river bed that fills with water or mud when it rains, but is most often dry.  The kids had learned about “guts” in St Kitts.  In St. Kitts they filled with water, here mud.  In one area there was once a river that flowed, the river is now buried under the ash and mud, and when it rains this area flows mud and debris down from the volcano.  The river of water still flows underneath it’s new covering.  The interesting thing about these mud guts is they are creating new land.  The mud and ash that flows down piles into the sea and the shore line is expanded little by little. 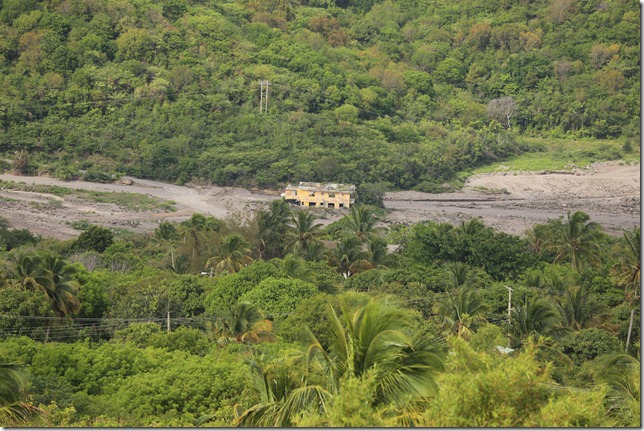 He pointed out the valley of homes north of the Volcano.  The area there is lush and green, and from our distance it looks like people could live there, that nothing had been destroyed.  But because of it’s proximity to the volcano and fumes, the homes were evacuated and can not be lived in.  He drove us through several areas like this.  In fact he drove us thru the area he had once lived, but can no longer.  He told us of how he and his family could easily walk to town from their home and how he liked where they had lived.  Where they live now, he said, is different. 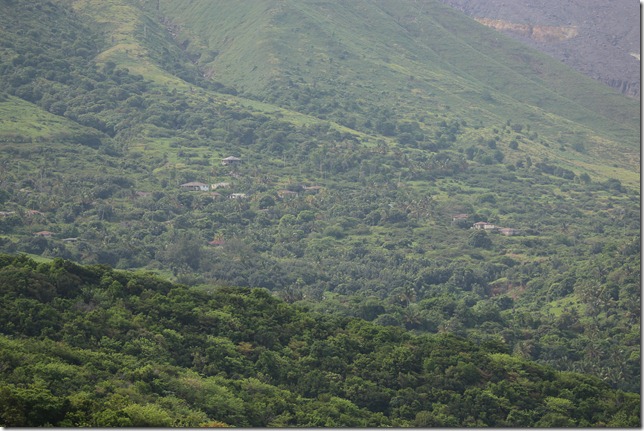 We drove across the large mud gut and over near the valley or the town of Plymouth.  It was once the capital of Montserrat and the largest town here.  Now it is mostly destroyed, and what remains is covered in feet upon feet of ash.  Along the way we passed a thermal energy plant.  This is a new project on Montserrat.  In the last few years they have started to drill for thermal energy.  They are hoping the project will go well and they can send some of the power over to the more populated English island of Antigua.  Another source of income to the island from the volcano is gravel.  Each time it rains and more is washed down from the volcano, they sift out the gravel and export it. 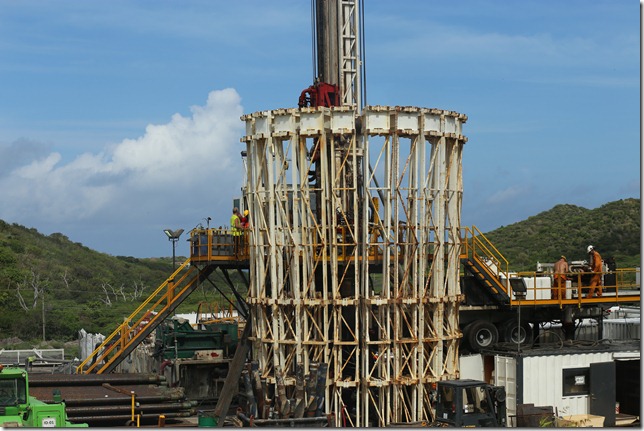 We drove into an evacuated area above Plymouth. This area is monitored by a guard along the road as you enter the area.  He takes a count of everyone in the vehicle and allows only daytime entrance into the area.  As we drove by homes you could see in the windows items that had been left behind, tables, chairs, filing cabinets, dishes, tools,…  It was very sad to see so much left behind.  Charles took us to the remains of a hotel he once worked at.  It is completely intact, but covered in ash.  From there we had a closer view of Plymouth and could see what had happened. 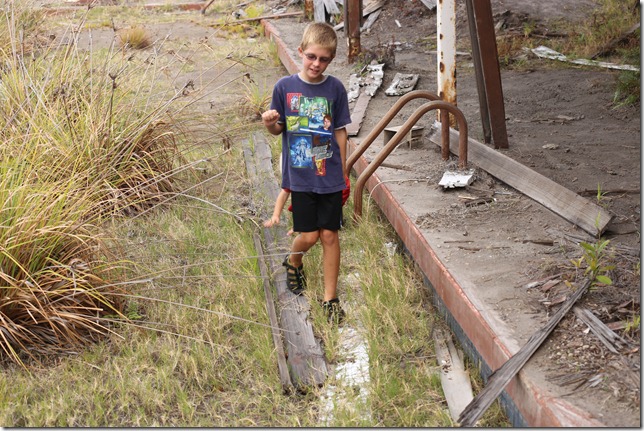 This volcano did not erupt spewing lava everywhere, so it looks different from what we had seen on the Big Island of Hawaii, where lava is flowing.  There is no lava flow here or lava rock from a lava flow.  This volcano boiled and heated inside until it could take no more, then it blew it’s top, but not with lava.  It blew up from the hot gases collecting inside, and down came the gases, rushing out through Plymouth, destroying and burning everything in it’s path. (in the pictures you can see this area that was cut thru the town, it incinerated everything and left portions of the town in tact where the gases didn’t reach). 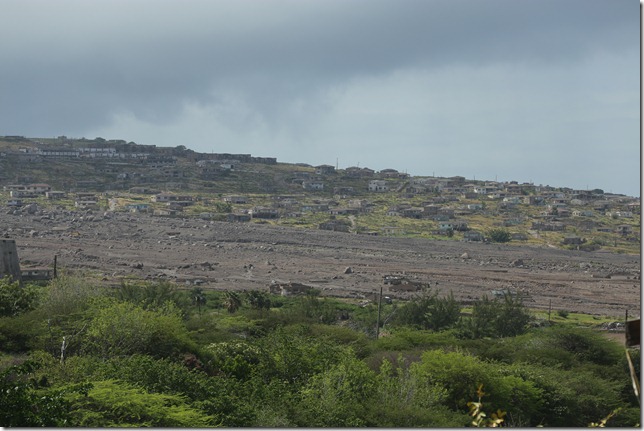 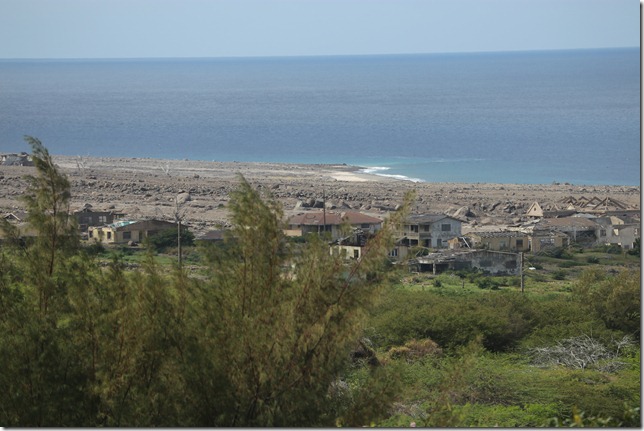 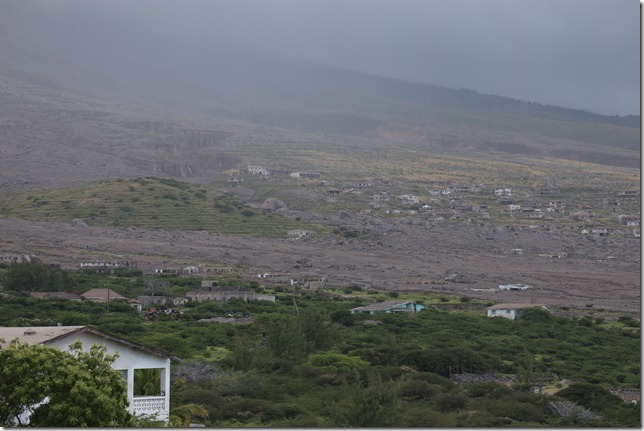 Then it rained ash everywhere. The ash piled higher and higher.  Then the rains came and created canyons of mud flow and ash down the volcano, pushing the mud and ash out to sea creating new land, and growing Montserrat.  Charles pointed out to us where the land use to end, and the ocean began.  Now a new shoreline extends a few hundred feet out.  Where we were at the hotel, he explained, the gases never came, but the ash rained and rained down.  Now much of what has been covered in ash is starting to grow plants and bushes, and it is starting to look more green than brown. 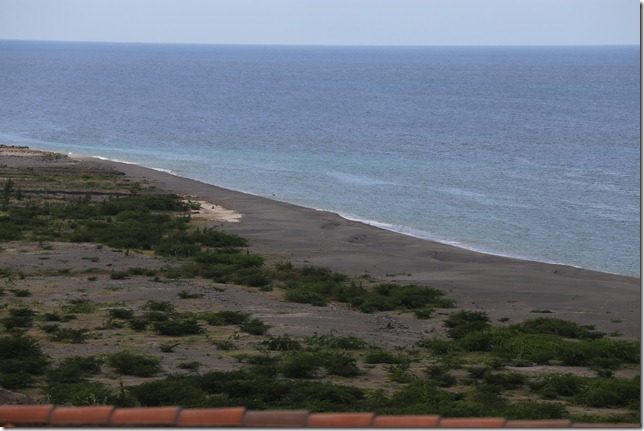 On our way back we stopped at a couple of view points.  He took us to the top of a hill, where our van barely made it up, only after David and Madison hopped out to walk up to make the van lighter. 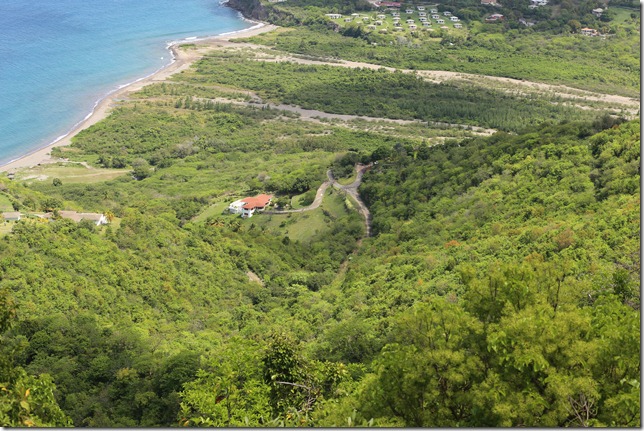 As we drove back thru the mud gut from the way we came, Charles drove out to the new beach.  We got out for a short walk.  The kids found pumice stones that had been washed down from the volcano.  I didn’t know pumice was made from volcano’s, but it is a kind of lava rock. 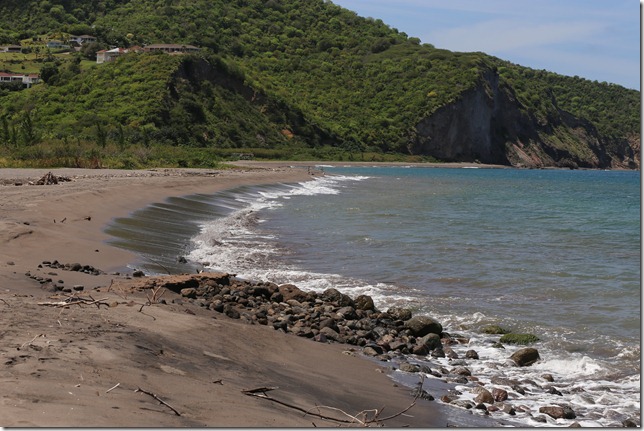 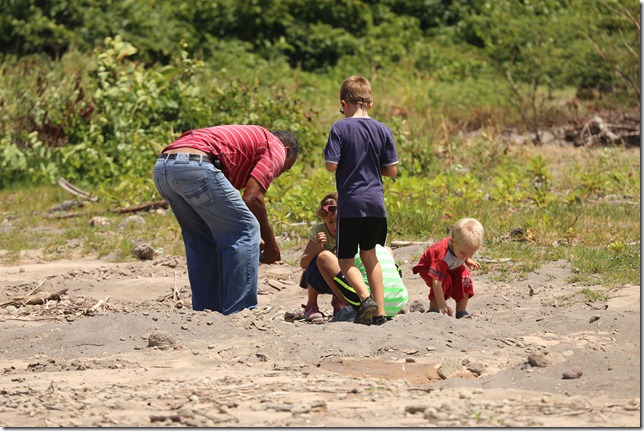 From here we drove over to the housing area where they moved everyone too.  The government had built new homes for people who needed them, and was now selling them to them. 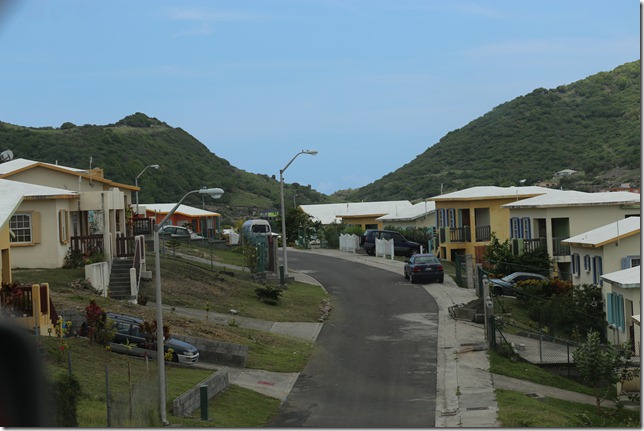 We enjoyed our morning tour of Montserrat and had the anchorage afforded more protection we probably would have stayed longer than one night.  In the afternoon we started our short sail to Guadeloupe, we stayed close to shore so we could view Plymouth and the volcano from the seaside.

Only 19 people were killed during the eruption.  Everyone had been evacuated beforehand, but a few kept going back to get more things, and some got caught by the eruption.  It is somewhat sad and devastating what has happened here on this island, but at the same time, it is fascinating how land is created and growing by this process. 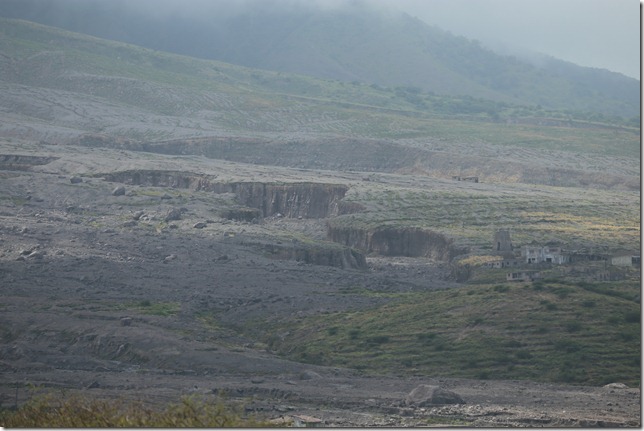 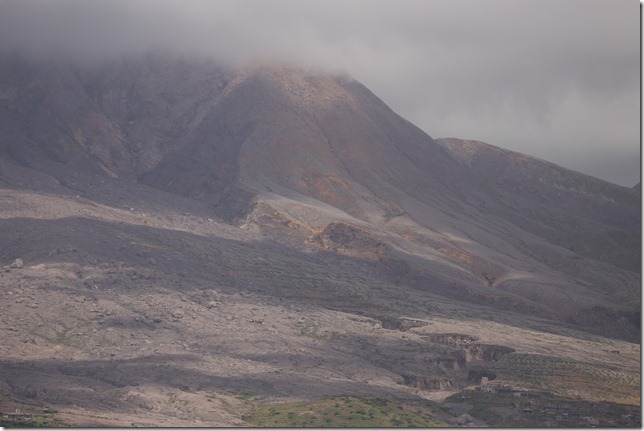 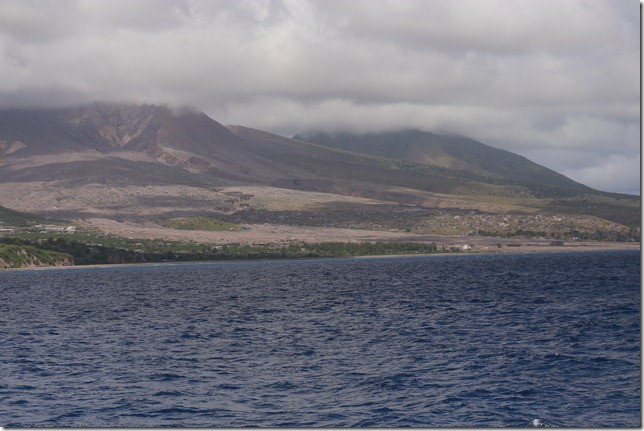 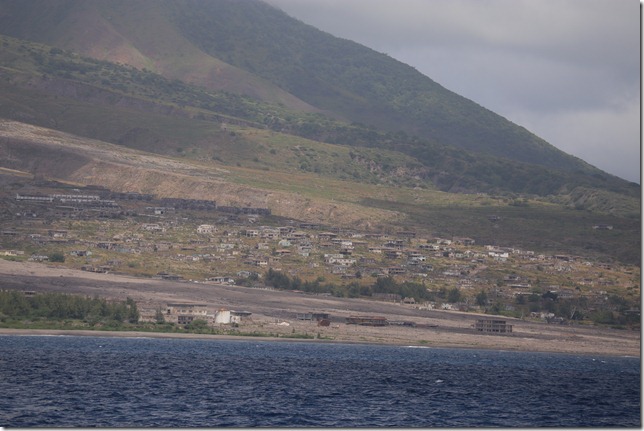 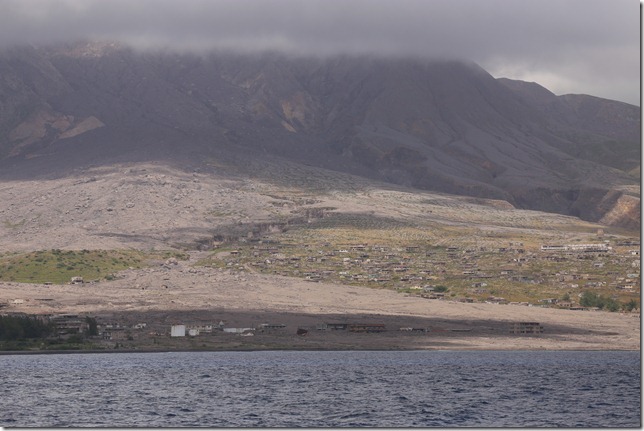 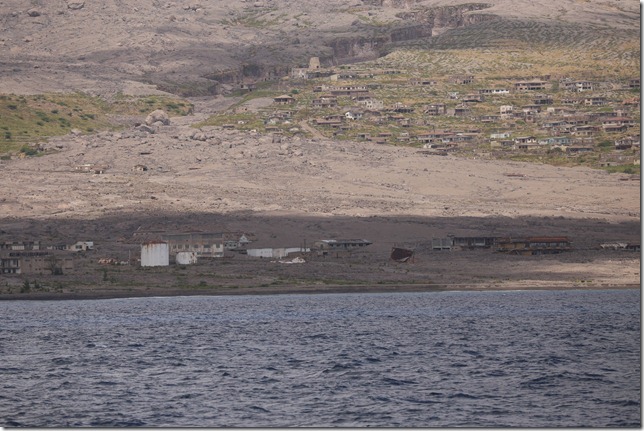 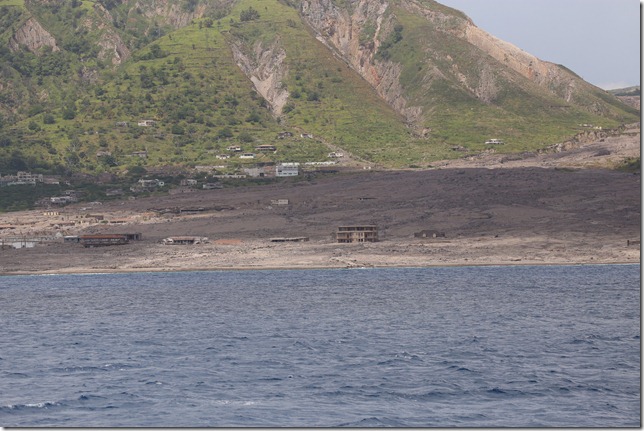 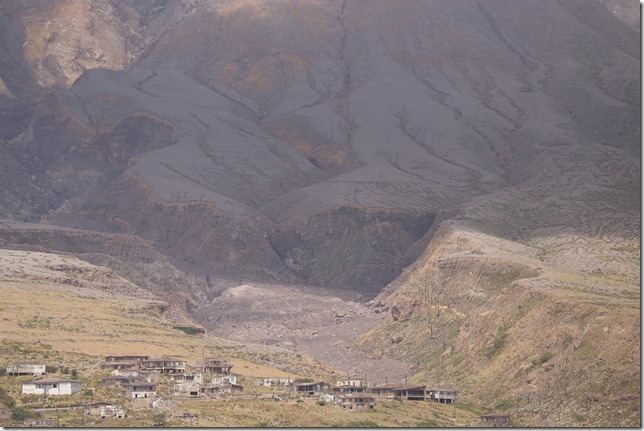 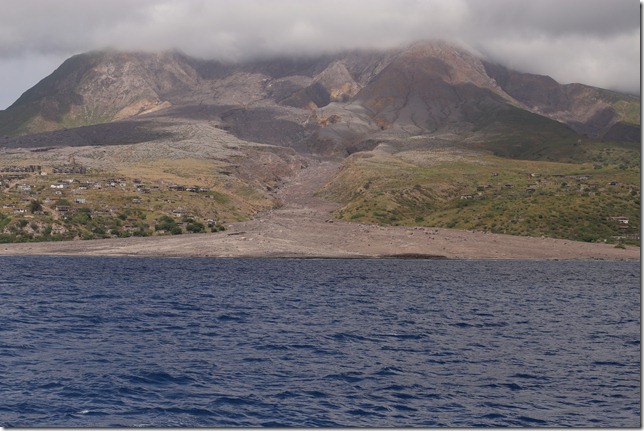 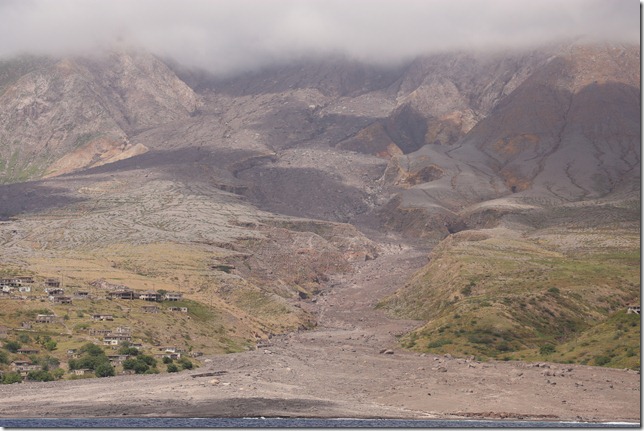 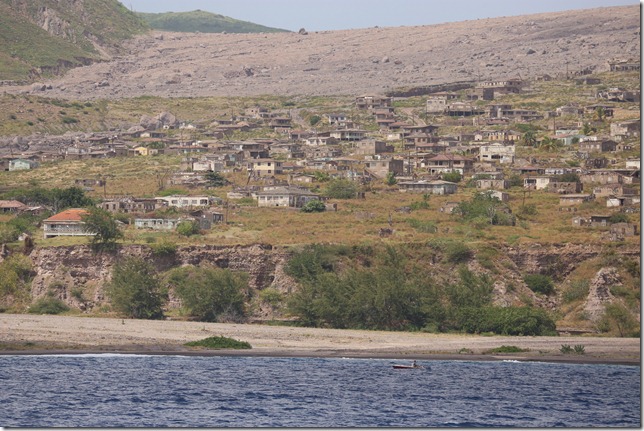 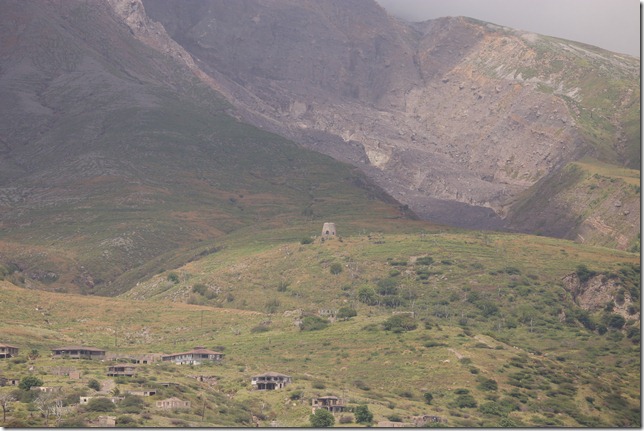 I know there are a lot of photos, but it was just so interesting.

Two years ago the island was hoping life would get back to normal, when the volcano erupted again. Fortunately this time the eruption flowed on the south end of the island, where no one was living. So there was no one to evacuate and no homes lost. In this area there are new guts and canyons of mud and ash and growth to the island.