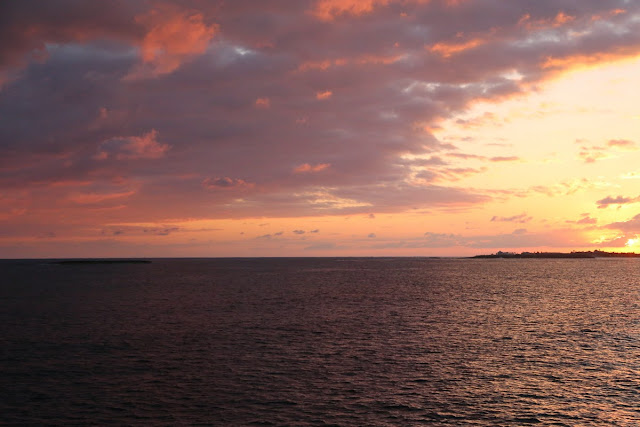 Leaving Bakers Bay as the sun came up was a bit of a treat.  It was early, but the sunrise was amazing. 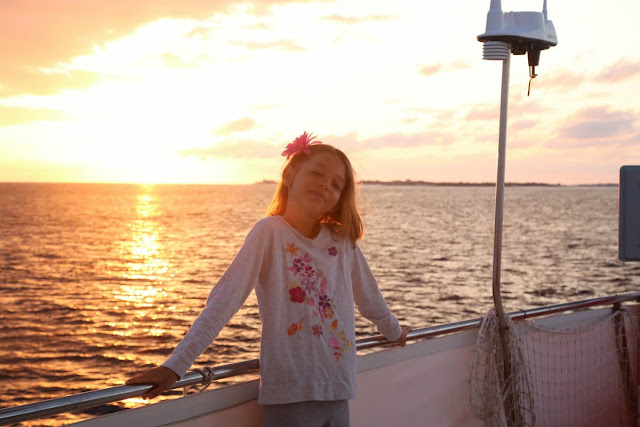 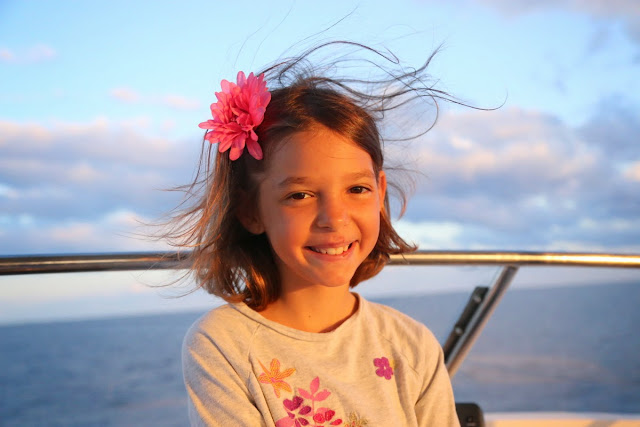 We had a beautiful day heading all the way from Bakers Bay to Great Sale Cay, northwest of the Abacos. We were not alone on the Sea of Abaco.  Several boats were headed to Great Sale, all en route to the US as well.  Most boats were planning to anchor in the south Bight of Great Sale, but we thought this was too open to the south west winds currently blowing.  The winds were light, so it wasn't that big of a deal, but instead we decided to anchor off the North East tip of the Cay.  It's not marked on any charts as an anchorage, but the water depths looked good, and the protection was right for the wind, so we thought we would give it a try.  And it would save us some time and fuel, rather than traveling a few extra miles around and into the bight.  We had been chatting on the Vhf with a couple other trawlers. They noticed our boweye snubber, and wanted to know how it was installed and rigged, and so they asked where we were planning to anchor, and then joined us in our quiet anchorage spot.  The holding was superb at the anchorage, and we were decently protected from wind swell, and we slept well for the night. 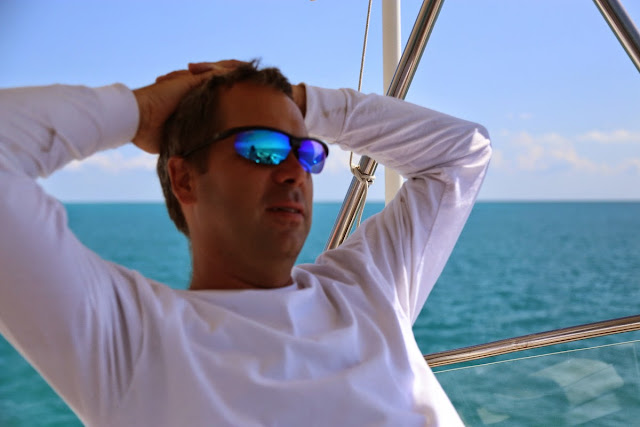 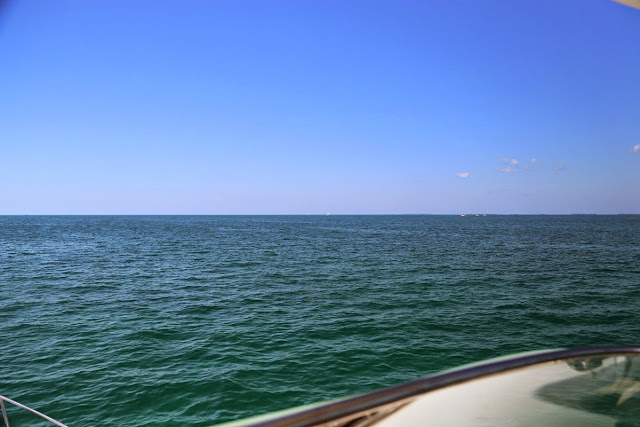 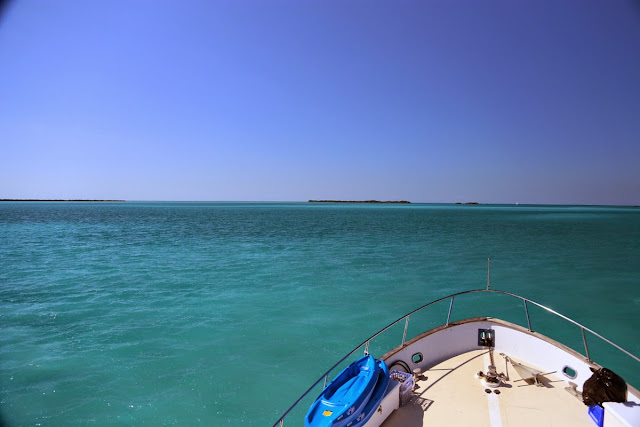 Bright and early, we were up and heading out as the sun was rising.  We were headed to Jacksonville, FL. If we ran straight there and could average 8 knots, then we'd make it there in 30 hours...  IF we can average 8 knots.  We typically travel around 6.5-7 knots, now that we are towing the tender.  We are slow.  But we'd be traveling north, and in the gulf stream for about 1/3 of the time.  The gulf stream would give us at least a 2-3 knot boost-- we hoped.  We spent most of the day traveling off the Little Bahama Bank, and sure enough a few hours after heading northwest, once we reached the big blue ocean, we picked up speed... sometimes see speeds close to 11 knots-- we were cruising now! 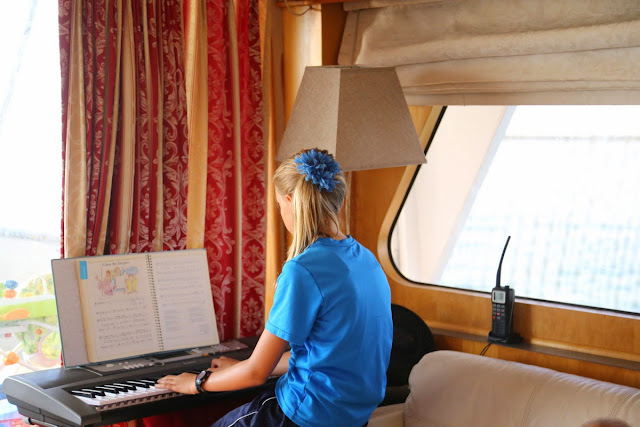 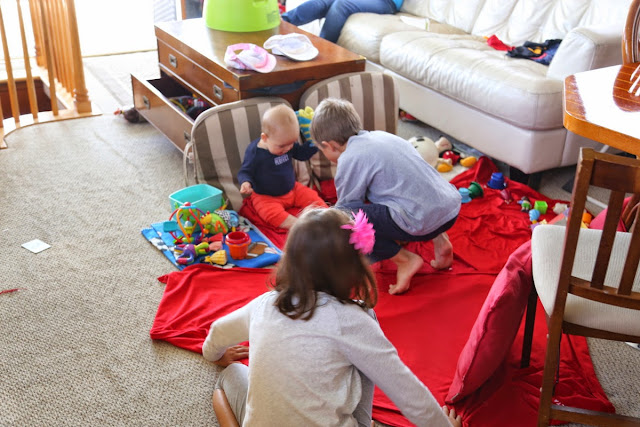 Even though we are underway, as long as no one feels sick, we treat it like a normal day.  School, chores, games, and play.  It's just like any other day, except we are on the move. 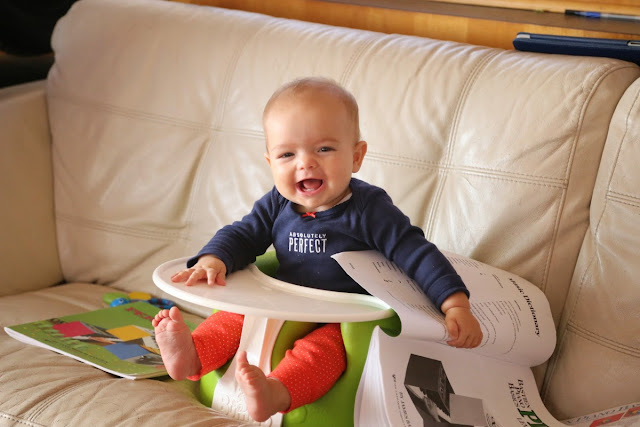 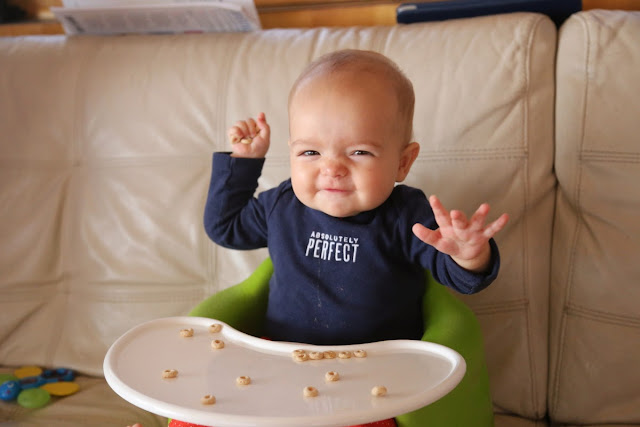 After seeing all the boats headed to Great Sale we thought we'd have more company on our cross to the US, but unfortunately most boats head directly west for the Florida coast, for the shortest open crossing point, and then head either north or south on the intercoastal waterway.  It's shorter and faster to just make a direct line to your next port, but it does require a longer time in open waters.  And for us an overnighter-- which I don't really love. So as we headed northwest, we found ourselves mostly alone out on the water.  Occasionally we'd cross paths with a Bahamian commercial fishing boat, or a tanker or a few container ships. 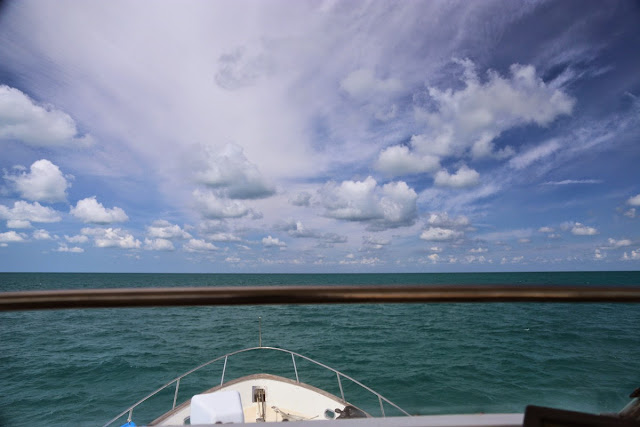 It wasn't the best crossing, but it wasn't the worst either.  Sometimes the waves and water were uncomfortable and harder to move around inside the boat, and other times it was calmer and just fine. But each of the kids handled it like a pro.  Even Brittany, our nanny was handling the seas better.  No more throwing up from anyone!   The older kids each took shifts helping with watch, day and night. It's a team effort. 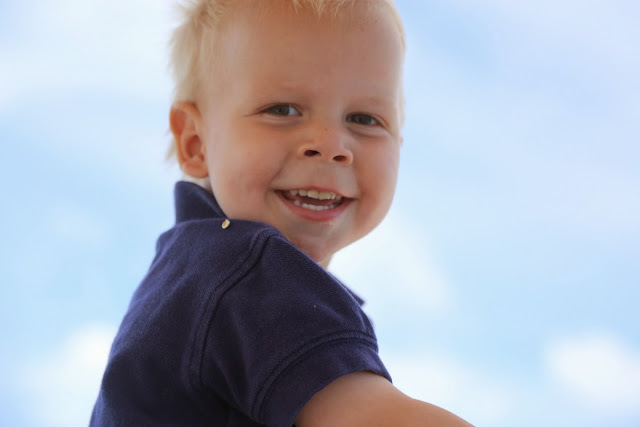 We had a few fun things that helped pass the time.  We had a very persistent bird that was determined to land on the railing on our bow.  Over and over the bird would swoop down from above and reach for the railing, but as the boat shifted in the waves, it would miss and then fly up above the boat.  Then it would attempt again and again.  Alexander especially enjoyed watching the bird. 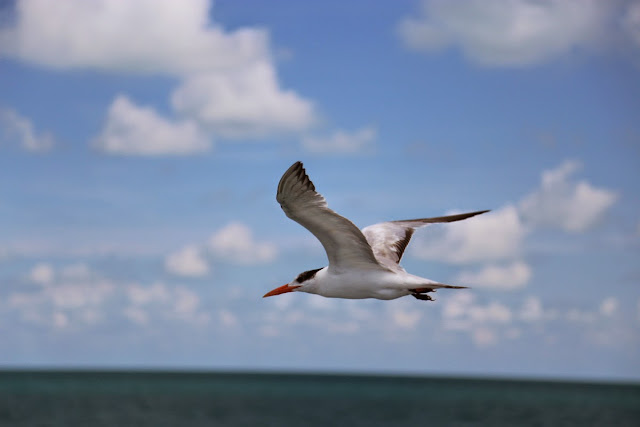 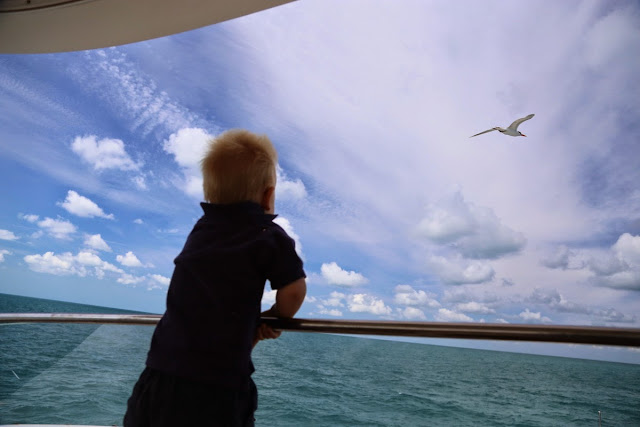 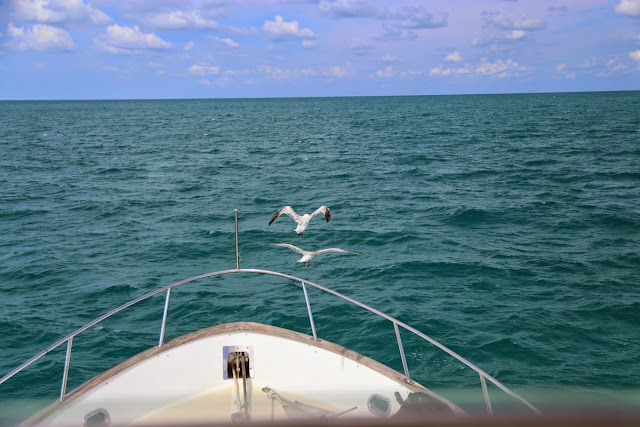 We also saw dolphins a few times on this crossing.  One time in particular, the dolphins came fast.. darting at our boat, flying thru the air, over the waves.  There were several of them.  They swam along the bow of the boat, surfing the wake. 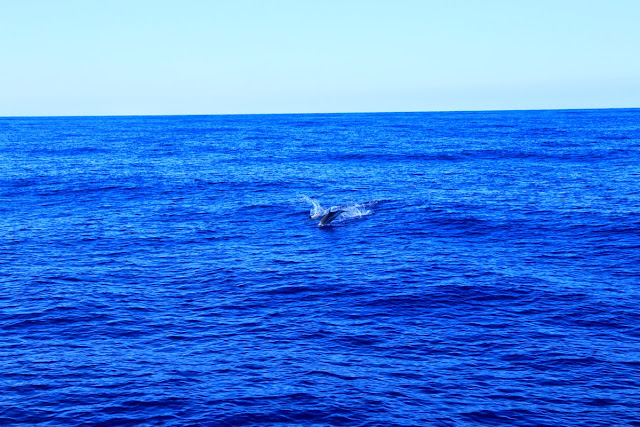 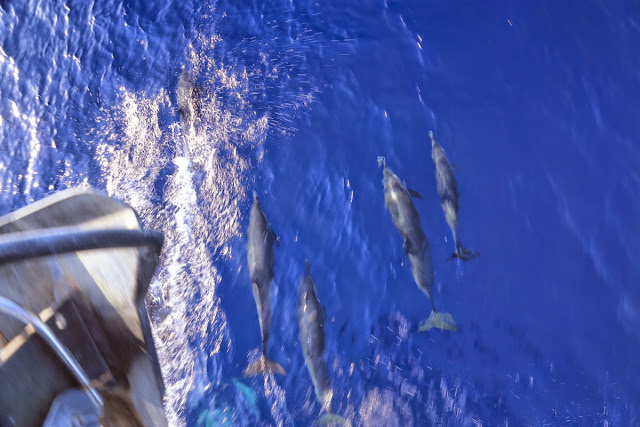 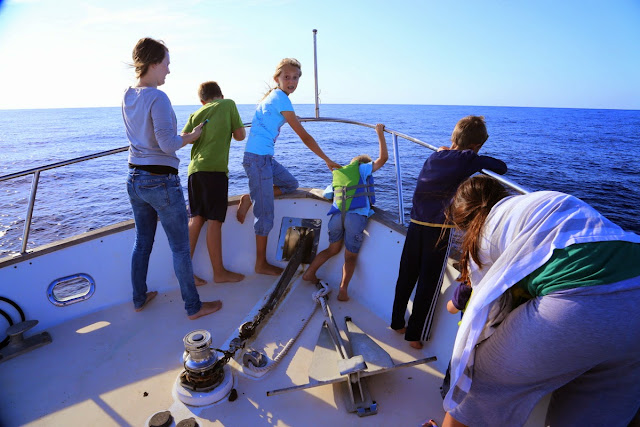 By the second day, mid morning we could see the coast of Florida as we headed closer and closer. We were planning to enter the intercoastal area of Florida at St. Augustine and spend the weekend on a mooring ball at the city Marina.  St. Augustine is a very pretty city, and the oldest inhabited city in the US.  The National Park service maintains a beautiful fort built in the 1500s.  It's a fun place to explore for a weekend.  Once we were close enough to shore to pick up cell phone service, I called to make a reservation for a mooring ball.  The staff also gave us a report on the channel.  They informed us that the markers had been recently set, in the last 2 weeks, to follow them in and we'd be fine.  This particular channel leading from the ocean to the intercoastal area is known for lots of shifting and shoaling. Markers get moved by the elements, and then your boat ends up where you don't want it to be.   It was comforting to hear the markers were recently checked out and moved to the right spots.  We had no issues entering in the channel, and saw deep waters all the way through.

Once we reached the city mooring field and tied up to a mooring ball, the next item on the agenda was to notify customs of our arrival.  David logged in to their reporting website and filled out our float plan, to notify by phone.  8 of the 10 of us were set up to report via phone.  The other 2, Brittany, and baby Julia, would need to report in person, which we planned to do the next morning.  It was now approaching bed time and we were all dead tired after 30 hours of travel.  I had checked the customs website our found that customs would be open tomorrow from 7am-7pm.  They had limited days of the week in St. Augustine, and the rule is you must report within 24 hours of arrival so in choosing to come to St. Augustine, rather than Jacksonville, we made sure the office would be during our 24 hour window.  We had all our ducks lined up... or so we thought.

When David called to notify customs, they told him that since all of our children had their passports renewed this last year, they no longer qualified to report via phone, they all had to report in person.  For us that now means taking 2 taxi's to customs instead of 1.  David called the local customs office and found out that they in fact would not be open tomorrow, so if we wanted to clear in during the 24 hour window, we would have to either arrive at the office in the next 20 mins, or drive to Jacksonville, an hour away.  We were not taking 2 taxi's to Jacksonville... and what happened to being open tomorrow?  I called the local customs office back to ask why they weren't open, when the US Customs website says they are.  And the officer bluntly informed me that he ..."was allowed to take a day off!"  I agree with his sentiment, however, the office should be open. Those are the hours listed on the Customs Website,  a replacement officer should be sent to cover for him.  But I guess not.  There was no way we would make it there in time, even though David was hollering at the kids to get their shoes and life jackets on.  He'd called the Marina office to ask them to line us 2 taxi's for us.  Just as I was telling him, it would be a waste, because there was no way we'd make it in time tonight before the office closed.  We were tired, and worn out from 30 hours of travel.  It was nearing bedtime, and I was exhausted.  To rush down to the office, pay for taxi's, to find we were 5 mins late, and couldn't clear in, would not go over well.   My plan was to just go the day after tomorrow.  That would be more than 24 hours later... but I figure if He can take a day off, then so can we.  David had concerns about the repercussions of not reporting on time, so I called the customs agent back to ask what the repercussions would be.  He did not know.  And after some discussion, finally he agreed to wait until 8pm for us to come in tonight.  That gave us an hour; enough time to get over there.

The marina staff had a small slip ready for our tender, and 2 taxi's waiting for us.  They were fantastic!  We hustled to the street and into the taxis they had called, and arrived at 7:30pm at the customs office at a small local airport.  The officer was taking care of a small plane arrival, and then was ready to help us.  And "help" is not really the right word.  He was gruff, with no sense of humor. We asked if he could re-approve the kids for the call-in arrival system, and he informed us, he was not spending any extra time with us.  He did not get paid overtime.  He would clear us in and that would take long enough.  We would need to make an appointment and come back another time.  He really was not pleasant at all.  Each of the kids lined up to be examined one by one with their passport photos, for clearance.  He then asked us the usual questions you are asked when you fly into the country, many did not apply since we arrived by private boat.  "did you pack your own bags, or did anyone ask you to bring something for them...?"  and I couldn't help but smile at how these questions did not apply---  we are on a boat that we live on, there are no packed bags, no luggage.  But apparently he did not like my smile-- and he stopped his question asking, to give me a quick lecture on how these are important questions, and a serious matter, and I should take it seriously.  Boy, I had to apologize and call him sir.  I felt like I had stepped back in time and would be denied entrance into my country. So I put on my serious face, and answered his serious questions.  He knows we are on a boat, why would he think those questions apply?  We have not been asked those questions when clearing in at other ports.  So this was weird.  After checking all the passports, he informed us we had to stay in the waiting area, while he and David went in the office. They sat in his office for about 20 mins, while the customs agent reviewed something on his computer, and David sat across from him.  Not too sure, what was going on, but this was by far the longest time we have ever spent clearing in to the USA.  Including the time Customs officers came out to our boat and boarded for clearance procedures.  I don't think I will plan to enter the US again at Port St. Augustine, and hopefully our paths will not cross with that customs agent again.  I don't think he liked his job much. 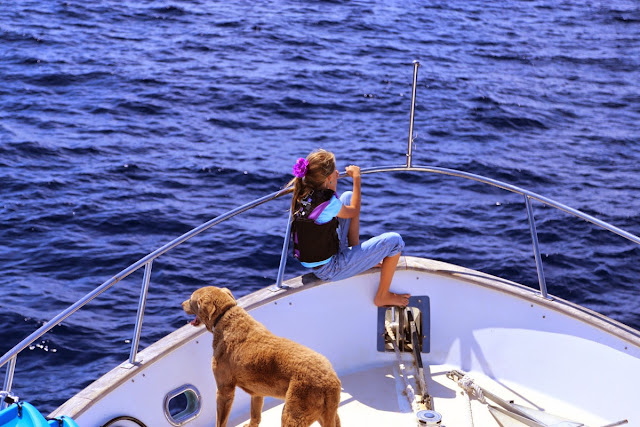 Savannah's favorite spot, perched on the bow, watching the water, waiting for dolphins.
Posted by The Blood Family