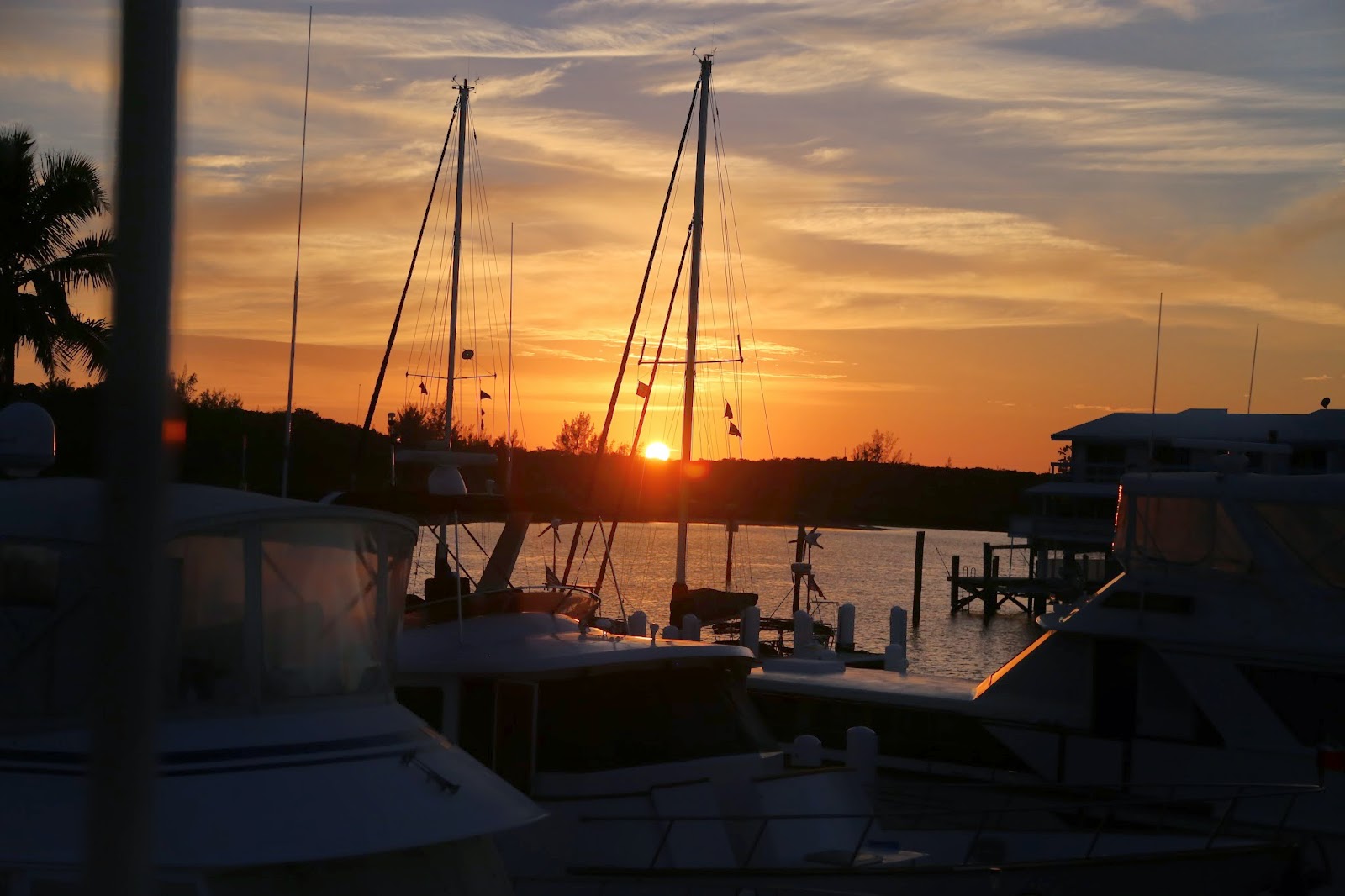 We arrived at Great Harbour Cay Marina early in the morning.  After getting settled at the dock, the next task was to clear in with customs.  This requires paperwork to be filled out, forms asking for names/birthdates/passport info of everyone on board.  Once the paperwork is filled out, the captain of the boat takes the paperwork to the customs officer, while everyone else stays on board.   Once the fees are paid, and the paperwork approved, we are then cleared into the country and can go where we wish.  In the Bahamas, this process is fairly easy as long as you show up at a port that has a customs office.

The kids finished up school work and had lunch.  Then while the younger kids napped, the older kids and Brittany set out to find the beach on the east side of the island.  It looked like a short walk for them.  David and I were in need of some rest and napped while they were gone too.

In the evening, we had a chance to visit with the small community of boaters that were spending a few of their winter months at the marina of Great Harbour Cay.  We were surprised to find as many boaters staying there for so long as we did.  We were also surprised to find among them the developer of a boating app that we use regularly.  David was particularly interested in talking with this developer about an idea he has been considering.  With so many friendly boaters, and strong winds from the south headed our way, we opted to stay in the Marina for another couple nights while the front passed us by, rather than hope the anchorage would provide enough shelter. 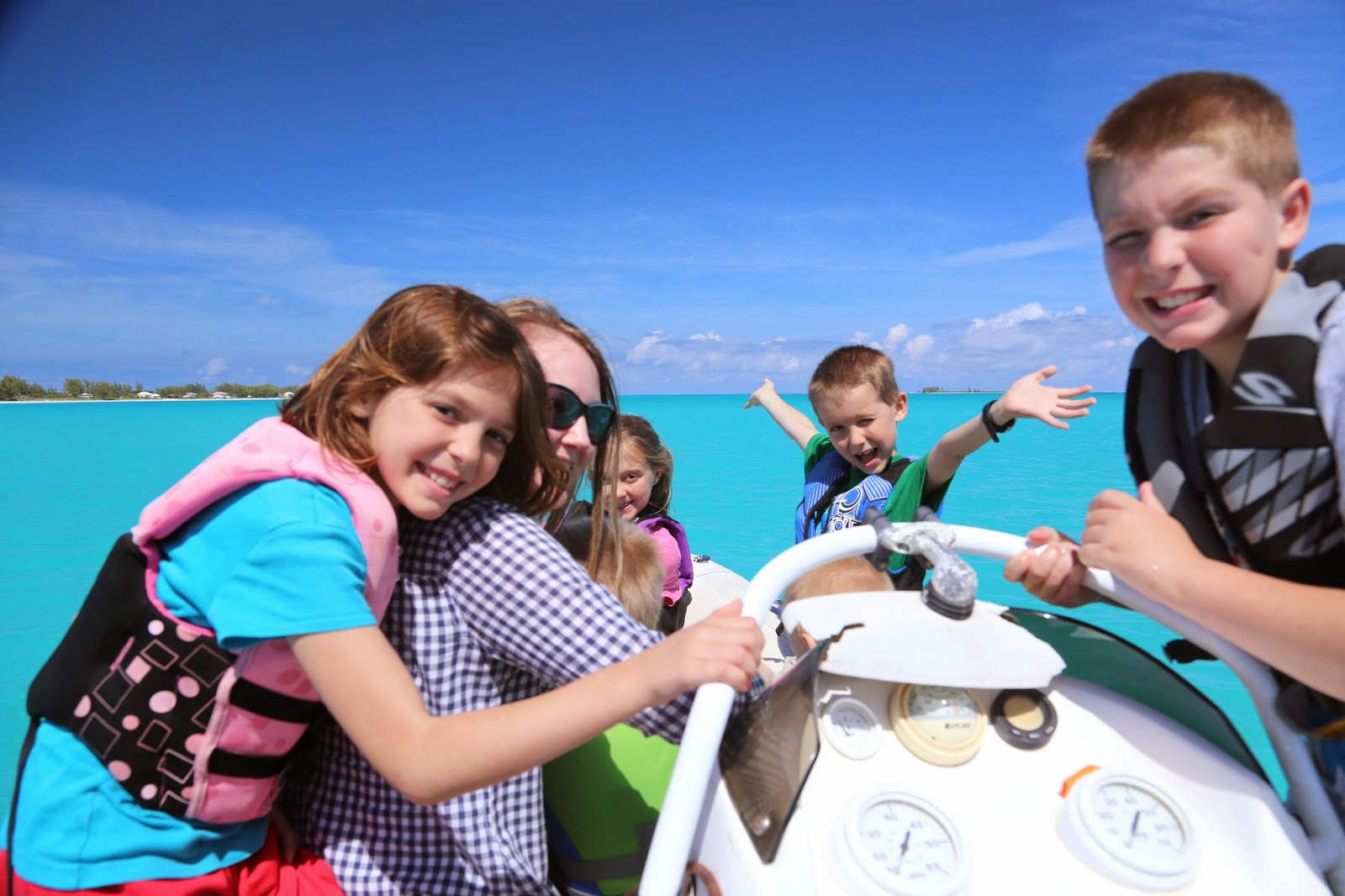 The next day, we took the kids in the small tender and went up Shark Creek.  This little creek can be found at the south end of the island and goes from east to west, or west to east, whichever you prefer. We, the adults, had fun enjoying the scenery, the kids repeatedly told us they were bored.  Even with stingrays swimming by us in the mangrove creek.  We went on a rising tide, as it was really shallow and we needed the higher tide to get through to the other side, where we found beautiful beaches, including the one the kids hiked to the day before.  We landed the dinghy on one near the creek, that had no swell and got out for a short walk.  The sand was soft, and the water as beautiful as I remember Bahamian water to be-- turquoise blue.  The water on the east side of the island, and in the Marina, was not this gorgeous blue.  It sang to my soul and said "go to the Exumas!"  The blue is amazing. Even though we weren't dressed for swimming, the kids could not help themselves and into the beautiful water they went, splashing and playing.  That kind of water is hard to resist.  It beckons, and calls to you, at least it calls to me.

That afternoon, dressed in swim suits, Savannah, Calvin, Brittany, and I made the short hike to the beach.  Savannah sat on the beach and wrote in her notebook, while I tested out the water-- slightly chilly, but such a pretty color.  The water is only about 77-78 degrees in the Bahamas.  Which is great if you are on a one week vacation from a cold winter climate, but when you are living in a warmer climate and your body adjusts... 77 is kinda chilly for swimming.  Thank goodness for rash guards that help keep our body heat in a little longer.  The air temp at 80 degrees was just perfect.

The next day the wind picked up from the south.  We thought about taking another tender ride, even loaded everyone in and headed out of the Marina, but between the wind, waves, and water spray, we headed back to the boat and decided to just walk to the beach.  So off we sent Brittany with 4 kids to the beach.  When the younger ones were down for their nap, David went off visiting again with the many boaters.  He enjoyed chatting about boats and the area.  We even attended a first aid on boats presentation given by the "ActiveCaptain" boat staying in the Marina.

Tomorrow the winds would calm and it would be time to head on... to bluer waters in the Exumas.