A visit from Idaho, and a week at Disney World

After 3 weeks of fixing problems on the boat, cleaning up after the roaches and ants, stocking with food, we were ready to head out on the water.  If only the weather would cooperate.  Our good friends and neighbors from Idaho came for a visit and we were hoping for good weather to cross the gulf stream and spend a week in the Bahamas with them on board.  They arrived late in the evening and we had a short window of calm waters overnight that we could have made it to West End, Bahamas, but we hadn't moved the boat much during the day yet and didn't want our first major outing to be in the dark, all night.  And by the next day, 20 knots wind was going to set in and just increase for the next couple days, bringing big waves.  So we said goodbye to our Bahamas plan, and decided to spend the next day heading south on the Intercoastal and spend the week in the Northern keys, just south of Miami.  The winds set in the next day with cooler temps, as we traveled down the intercoastal.  As we reached Palm Beach area, we passed the inlet and decided the ocean waters near shore looked calm enough to travel in the ocean rather than the intercoastal. So out into the ocean we went.  We could make better time without having to wait on bridge openings, and slowing for no wake areas.  Most of us did well with the slight swell, but poor Keaton was sick the rest of the day.  Sea sickness was not his friend. Calvin threw up at least once, and a few others felt sick but held it in.  Our nanny this trip, Brittany also got sick, but handled it well.  It was a long day, the kids helped drive the boat, played card games, minecraft and watched movies.  We finally arrived in South Miami and dropped our anchor at 11pm for the night just off South Beach. 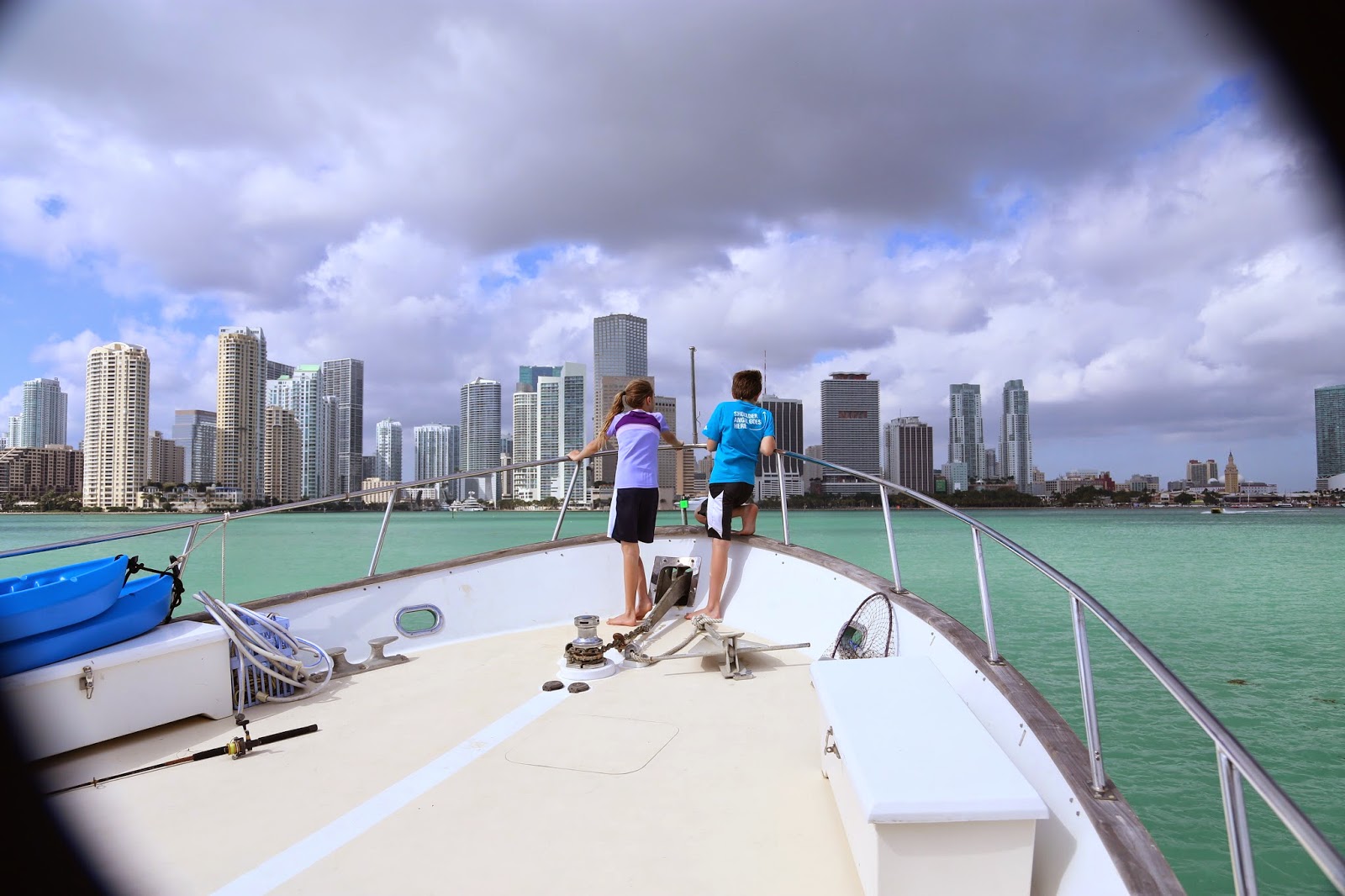 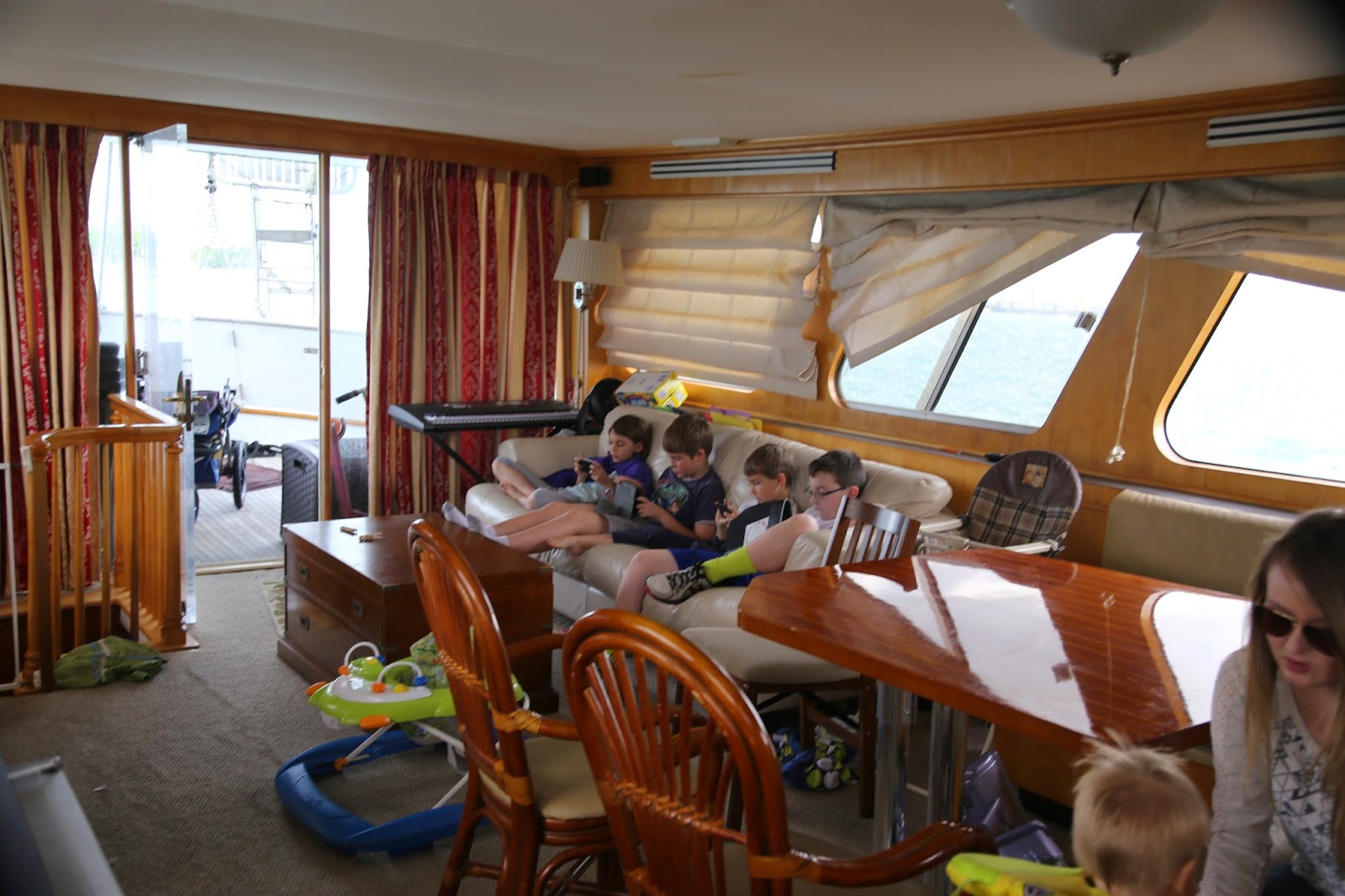 In the morning we set off a few more hours to cross Biscayne Bay and anchor for a few days off of Key Largo, on Crocodile Lake.  As soon as we arrived the kids set down the Kayaks to explore the area.  They begged dad to get out the hotdog and take them tubing.  We tested out our new purchase... a floating dock to tie to the boat to use as a swim platform at anchor.  I'm excited to use this on our upcoming weeks in the Bahamas.  The water was 68 degrees, to cold for me, but the kids had fun kayaking and tubing in it, and for longer than I thought they would be out. The air wasn't much warmer so it was surprising they played so long wet. 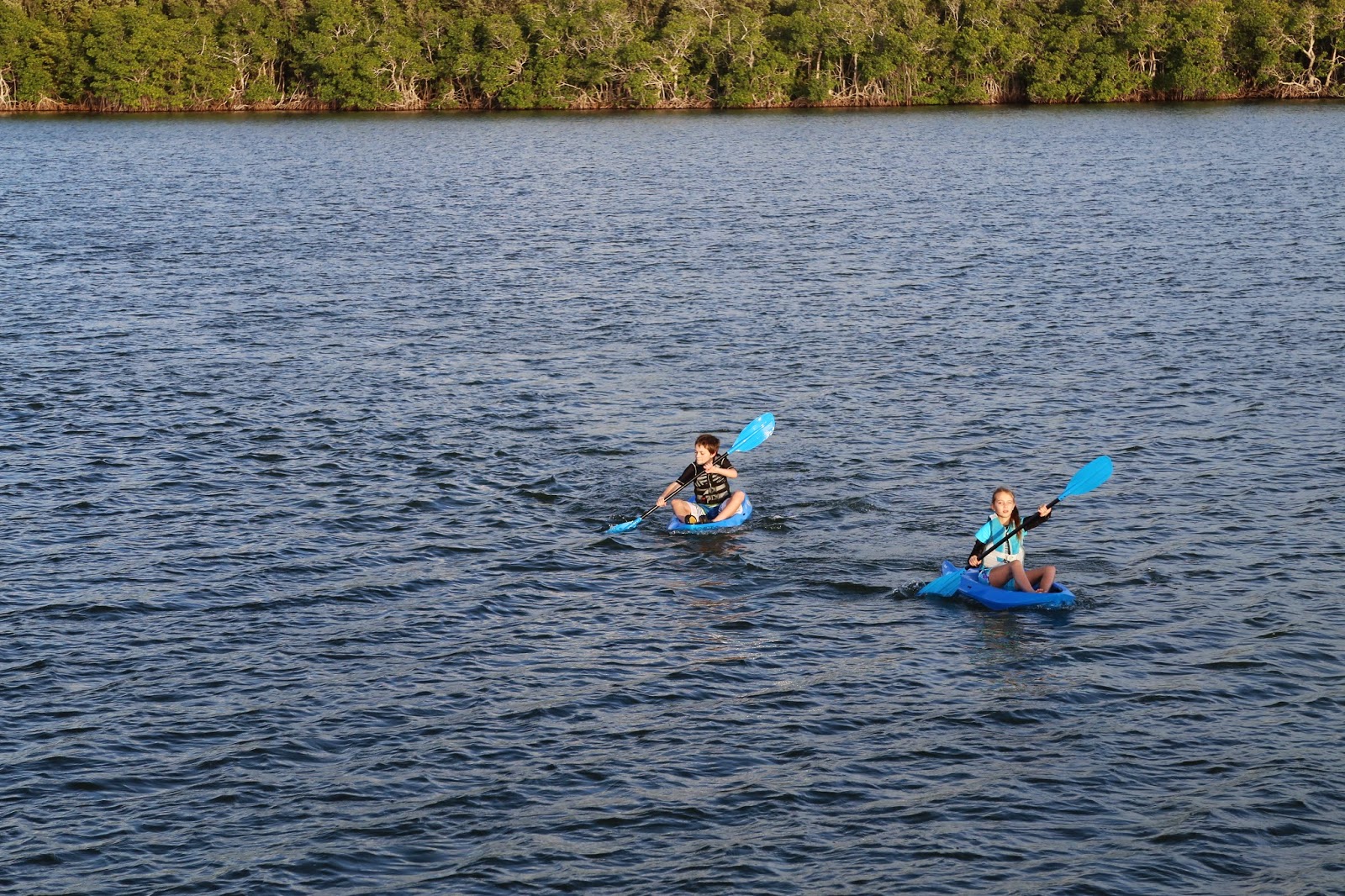 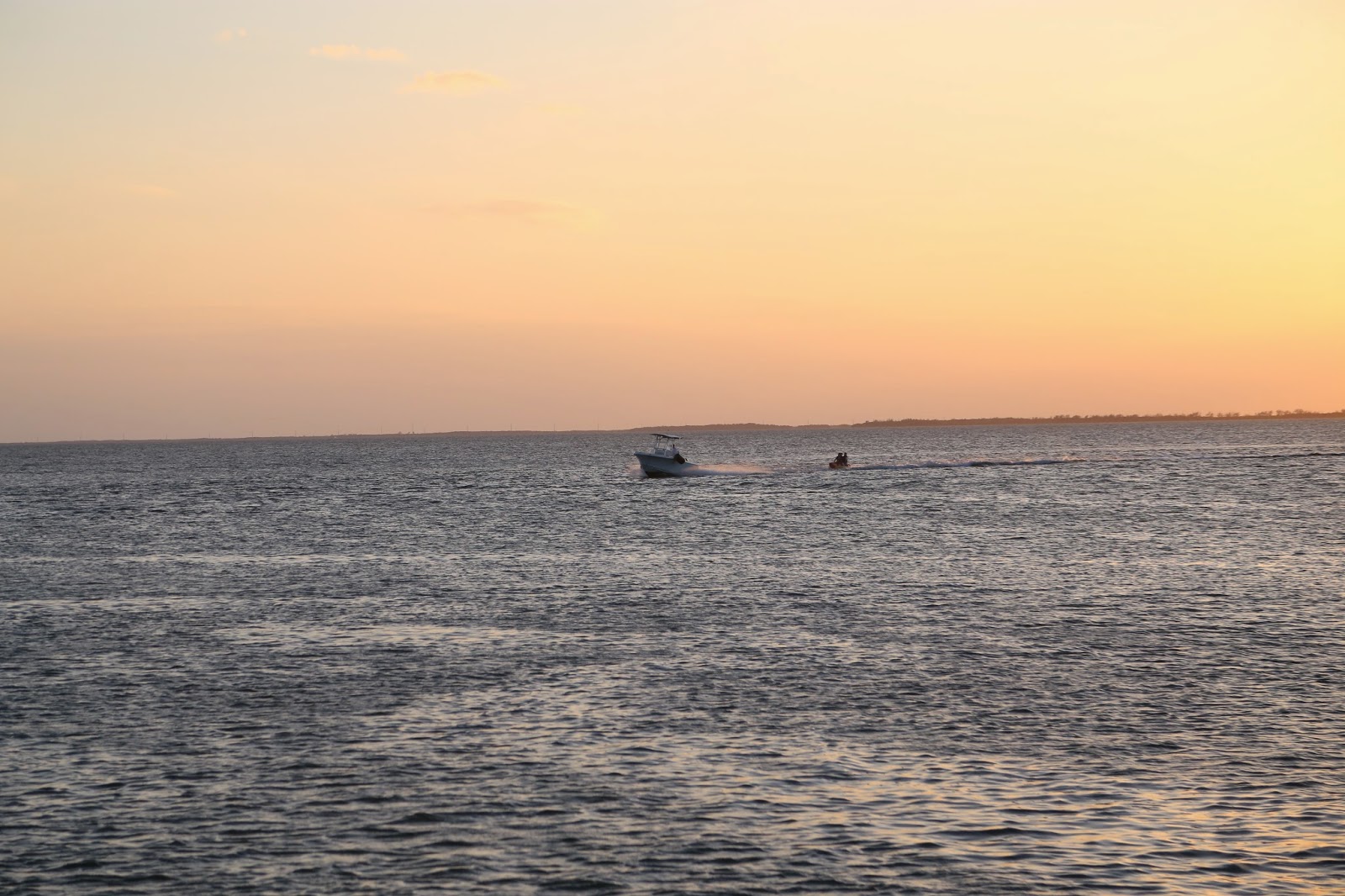 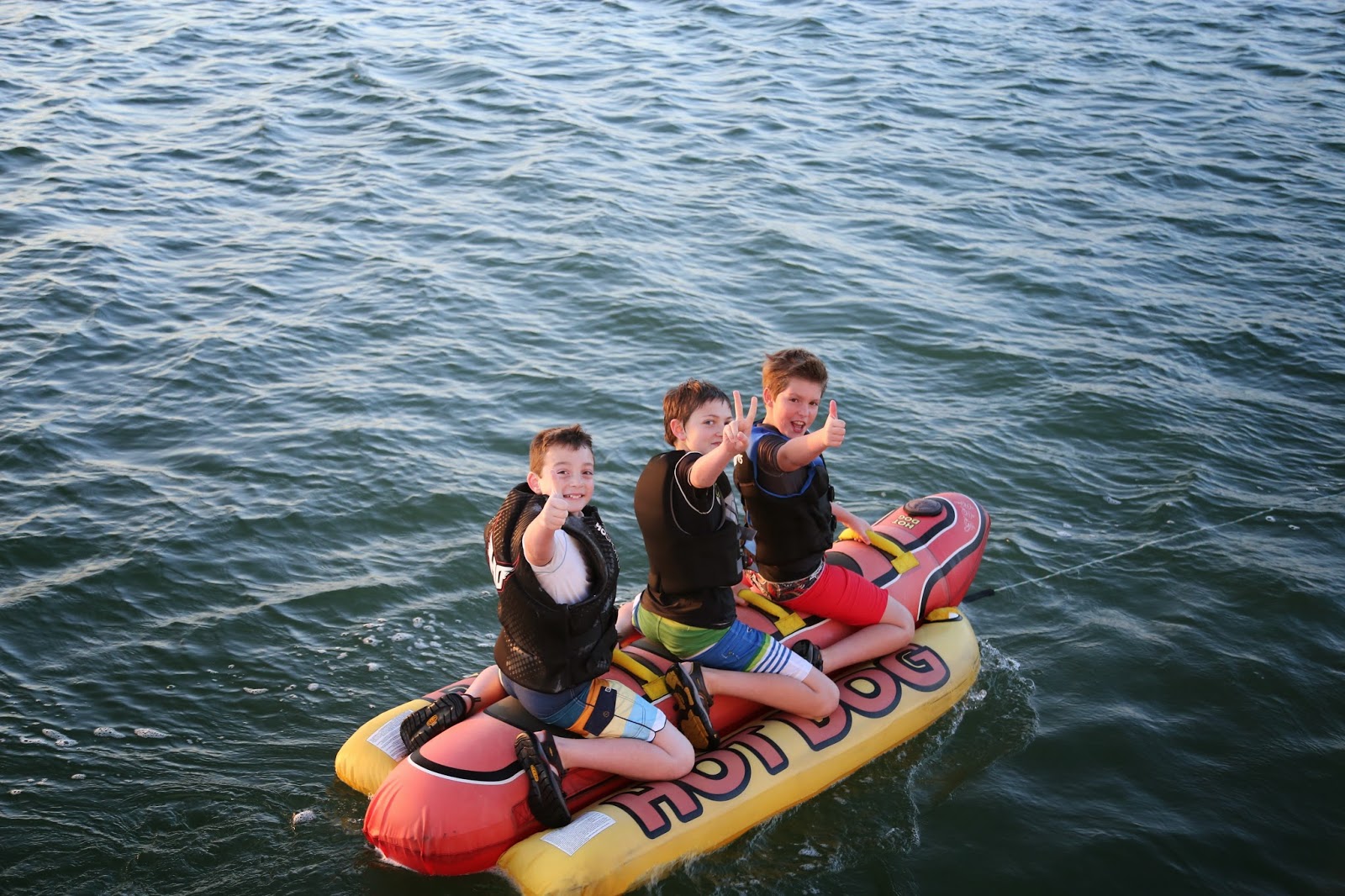 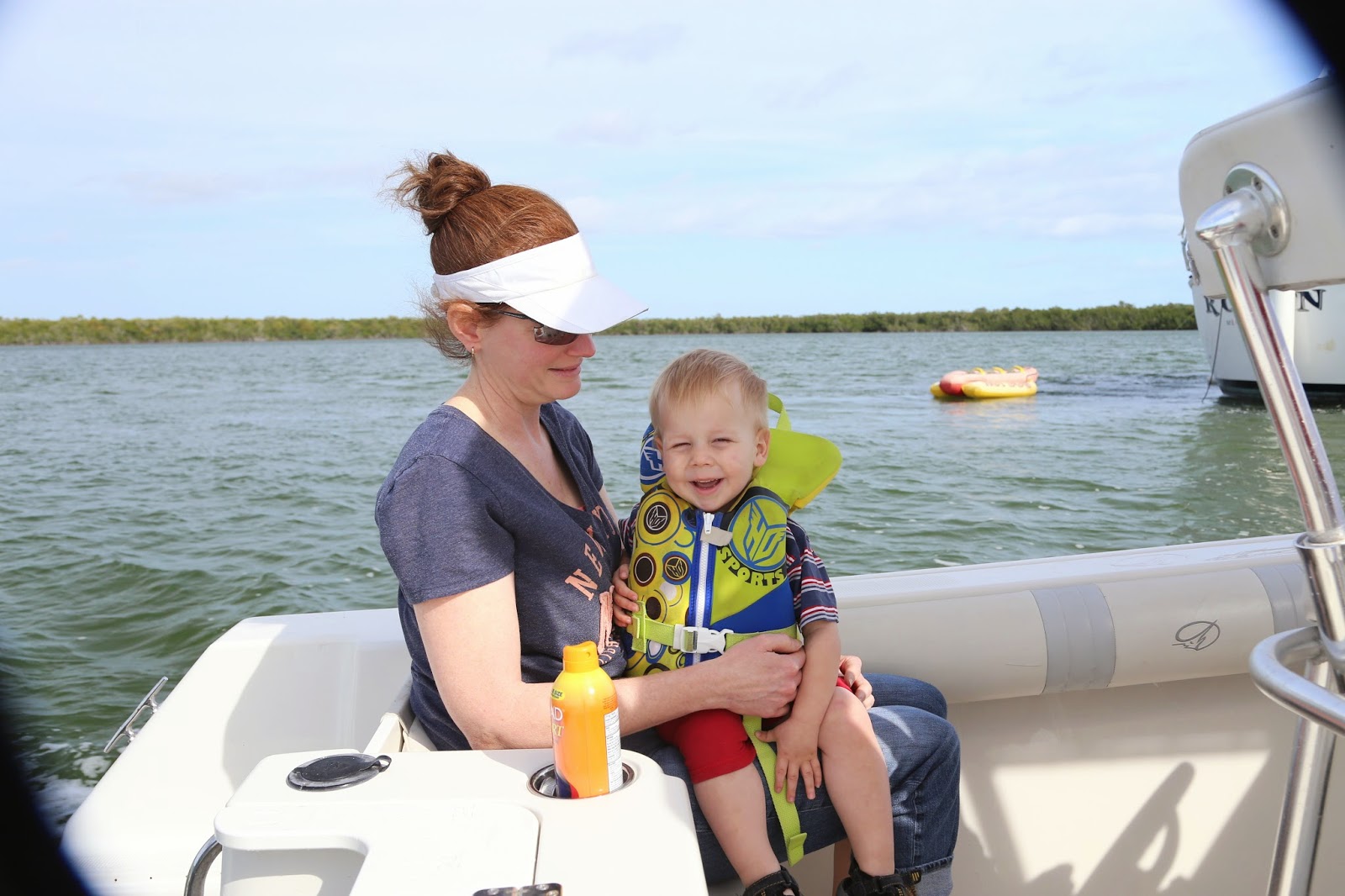 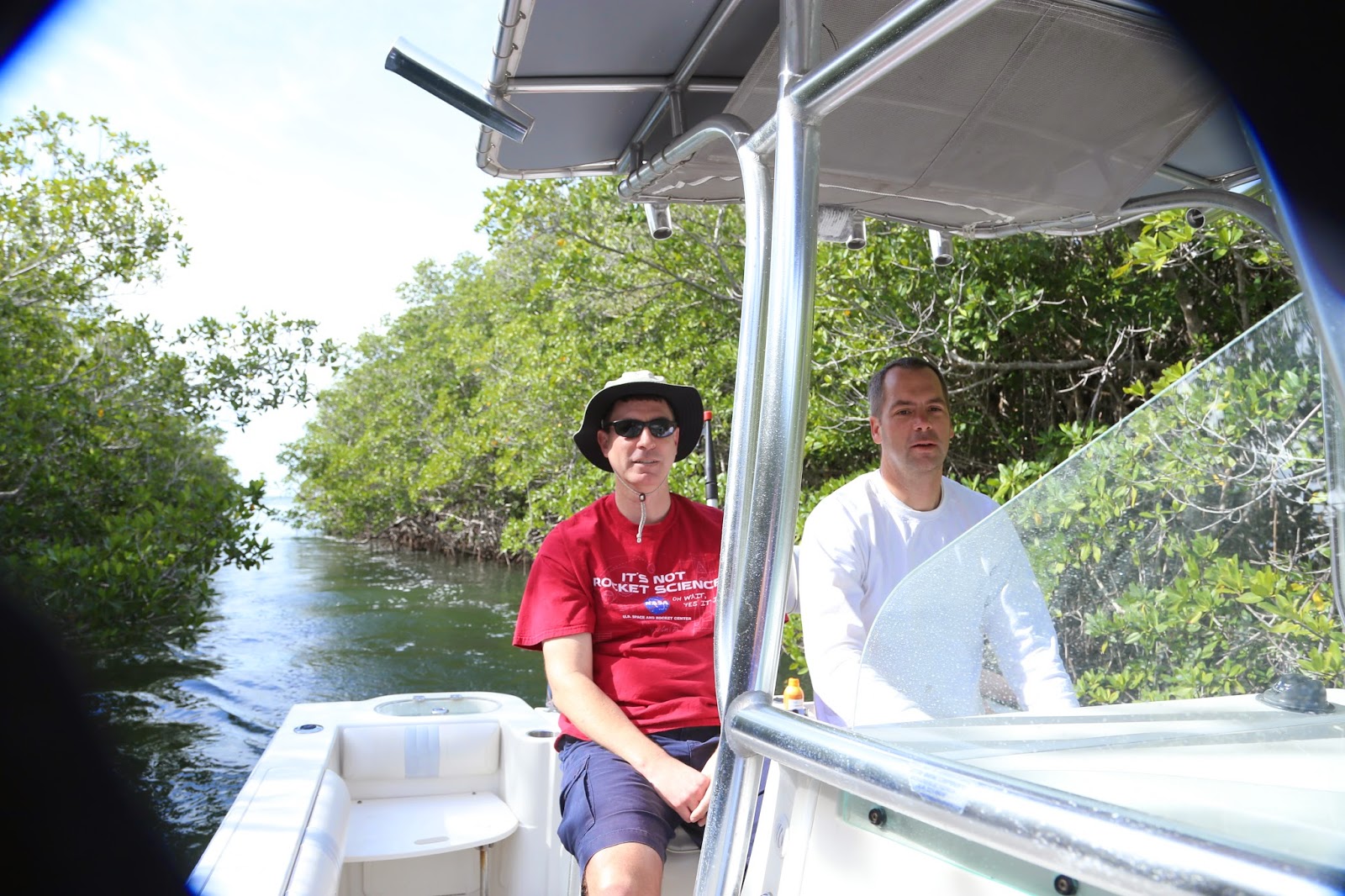 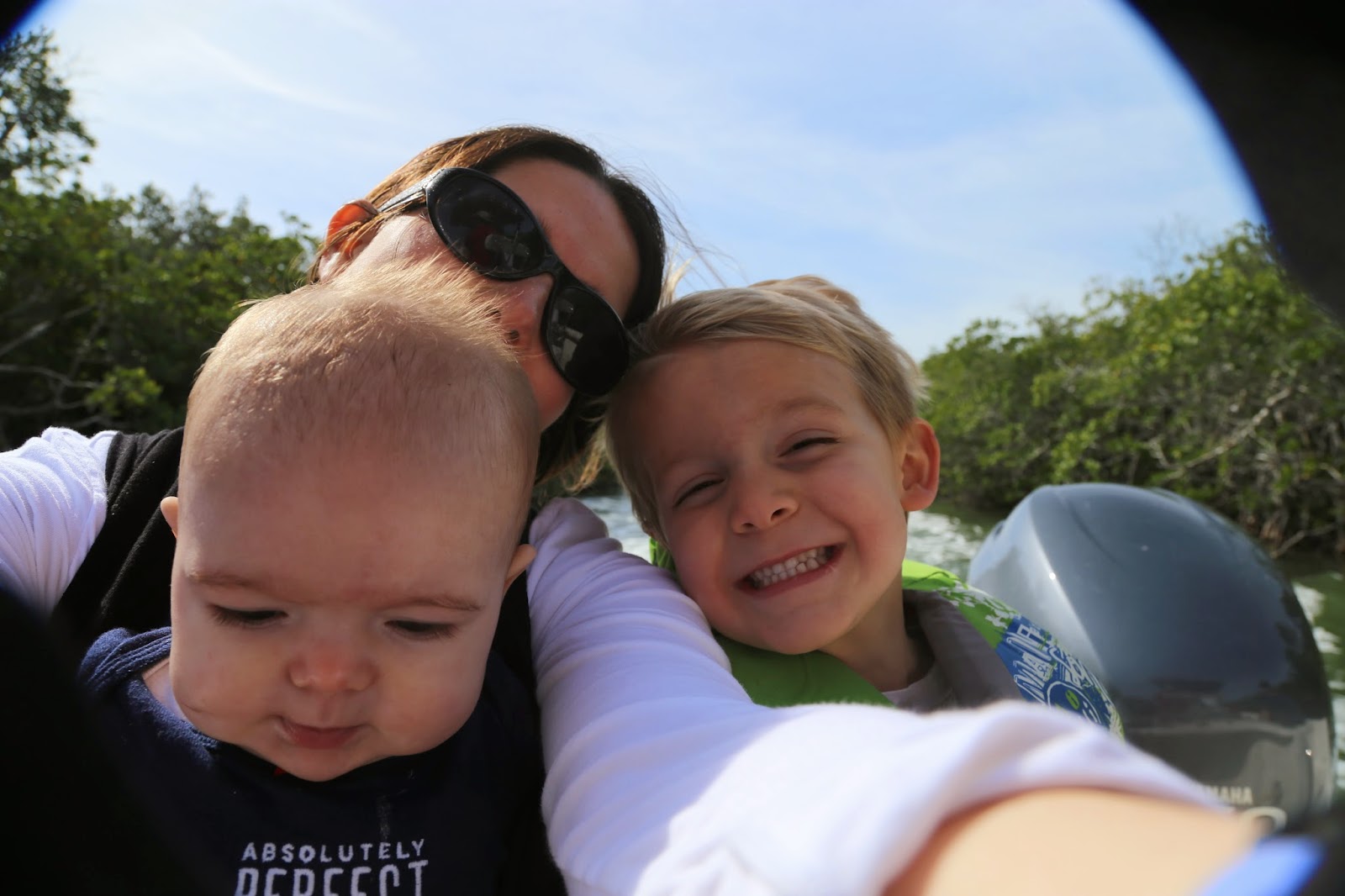 After a couple days off Key Largo, the winds finally settled down, and the air warmed a little, so we headed a little north into Biscayne Bay National Park, to anchor with several other boats off of Elliot Key.  The water is a pretty turquoise blue, over a sandy bottom.  But there was not much of a beach on shore.  Mostly a mangrove shoreline, but the kids had fun playing at the small beach.  The adults stayed put in the tender, not wanting to brave the cold water to reach the small beach.  We enjoyed chatting while the kids played. 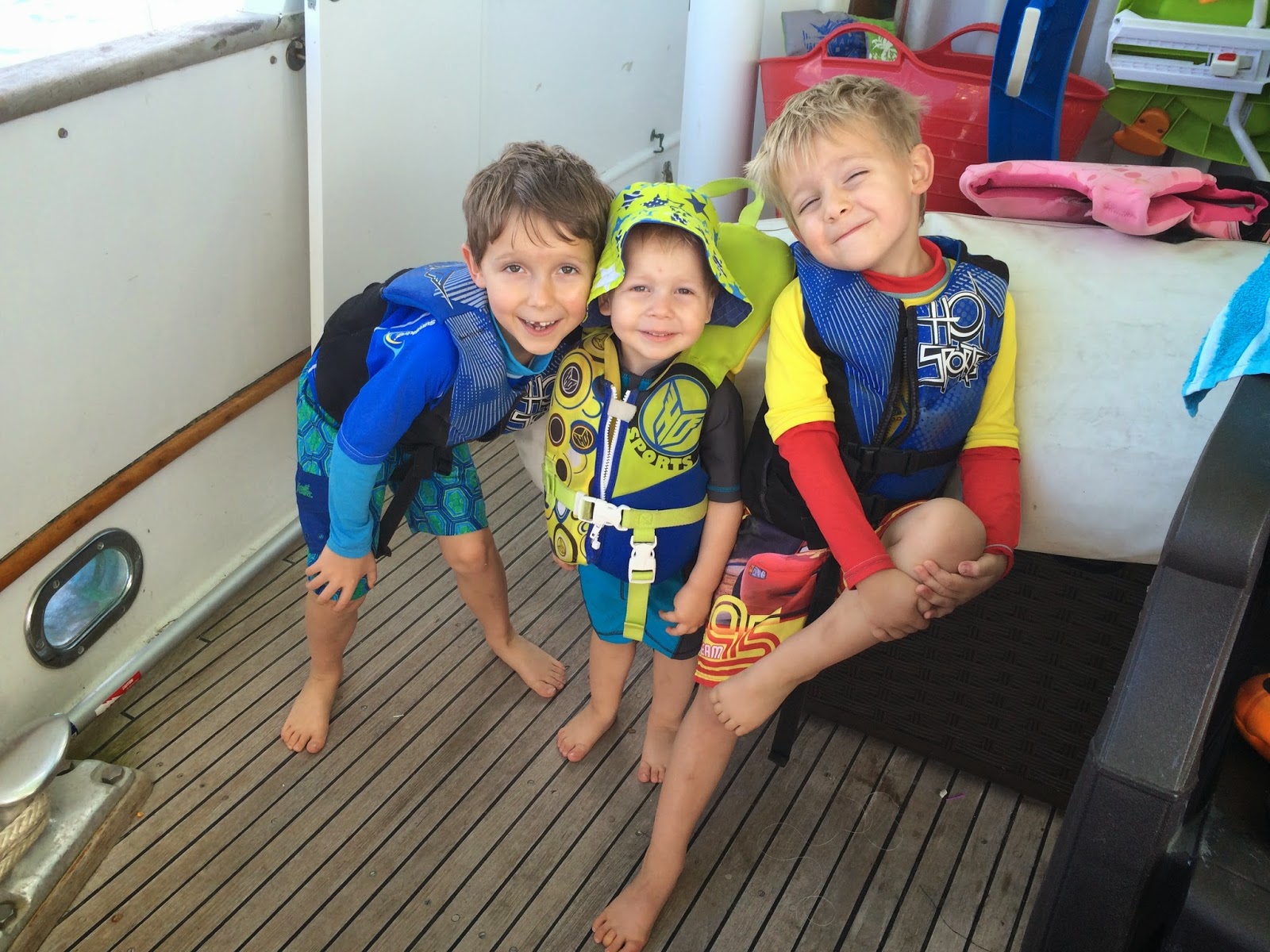 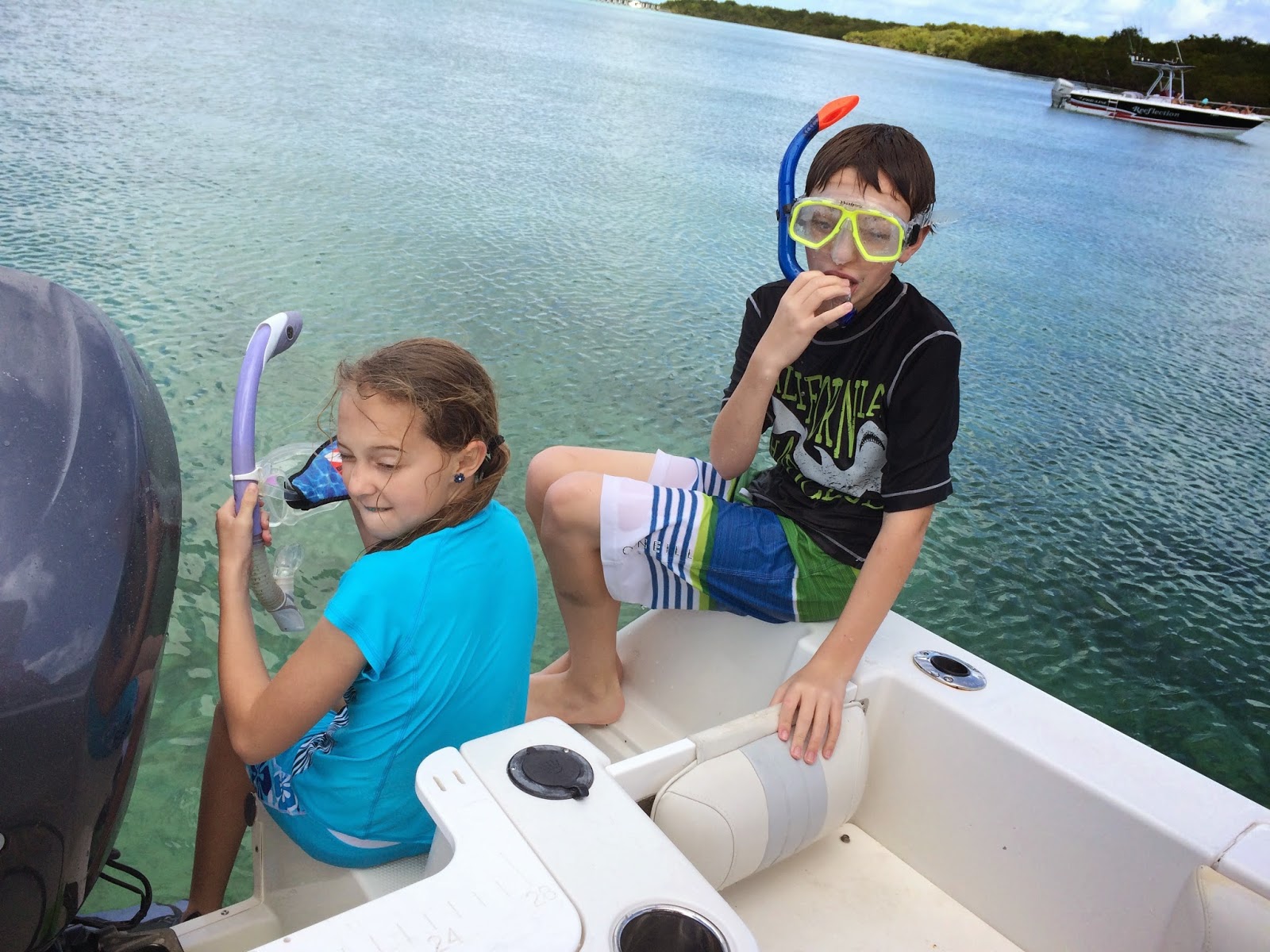 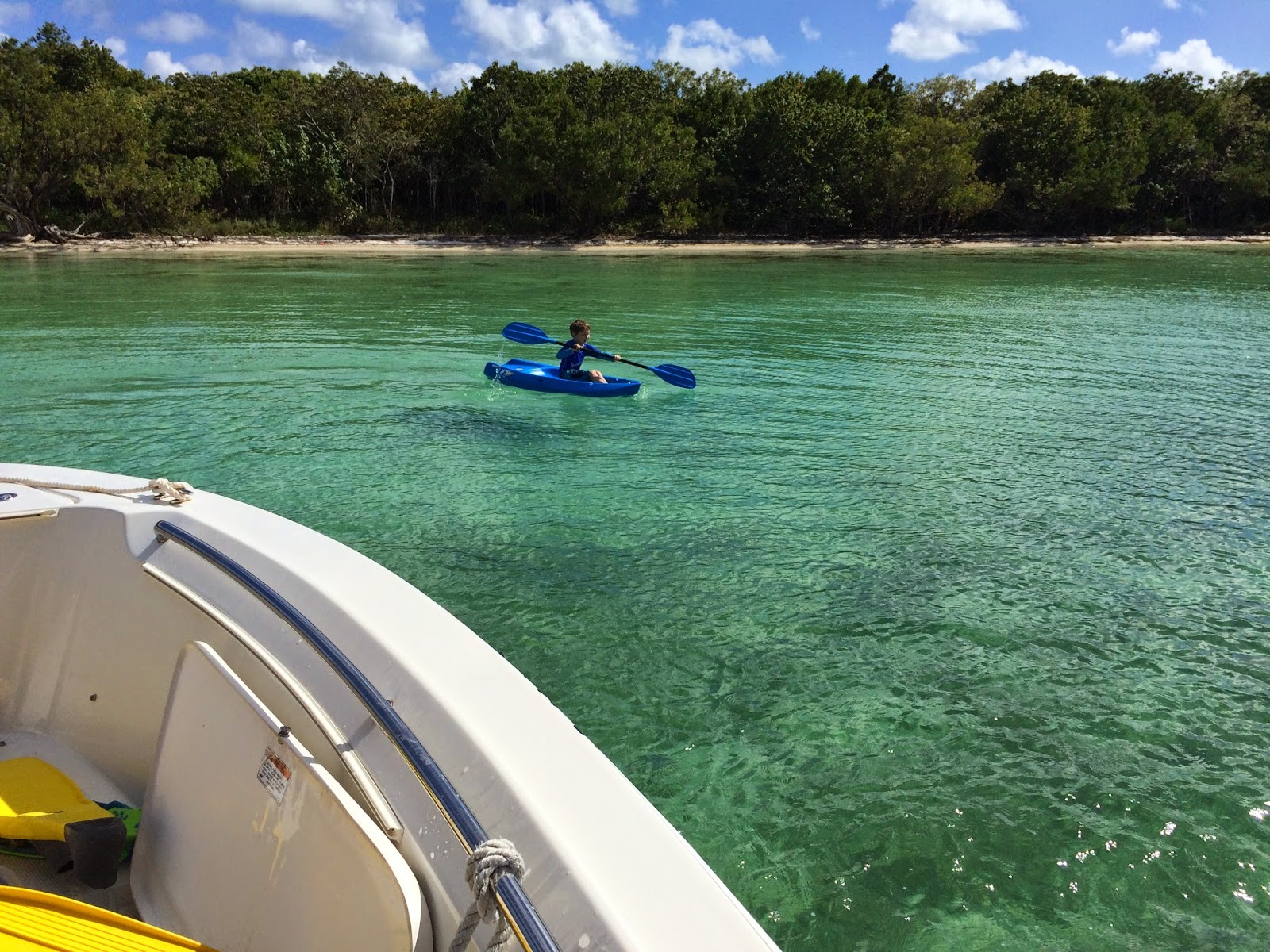 Monday Morning we left before sunrise to make the most of the calm weather to journey back north. We passed by Stiltsville, just south of Miami at Daybreak.  The sun came out in the afternoon and it was a nice day.  Too bad we couldn't have spent it traveling back from the Bahamas.  We anchored that night just a few miles from Stuart in Hobe Sound, just off the intercoastal waterway. 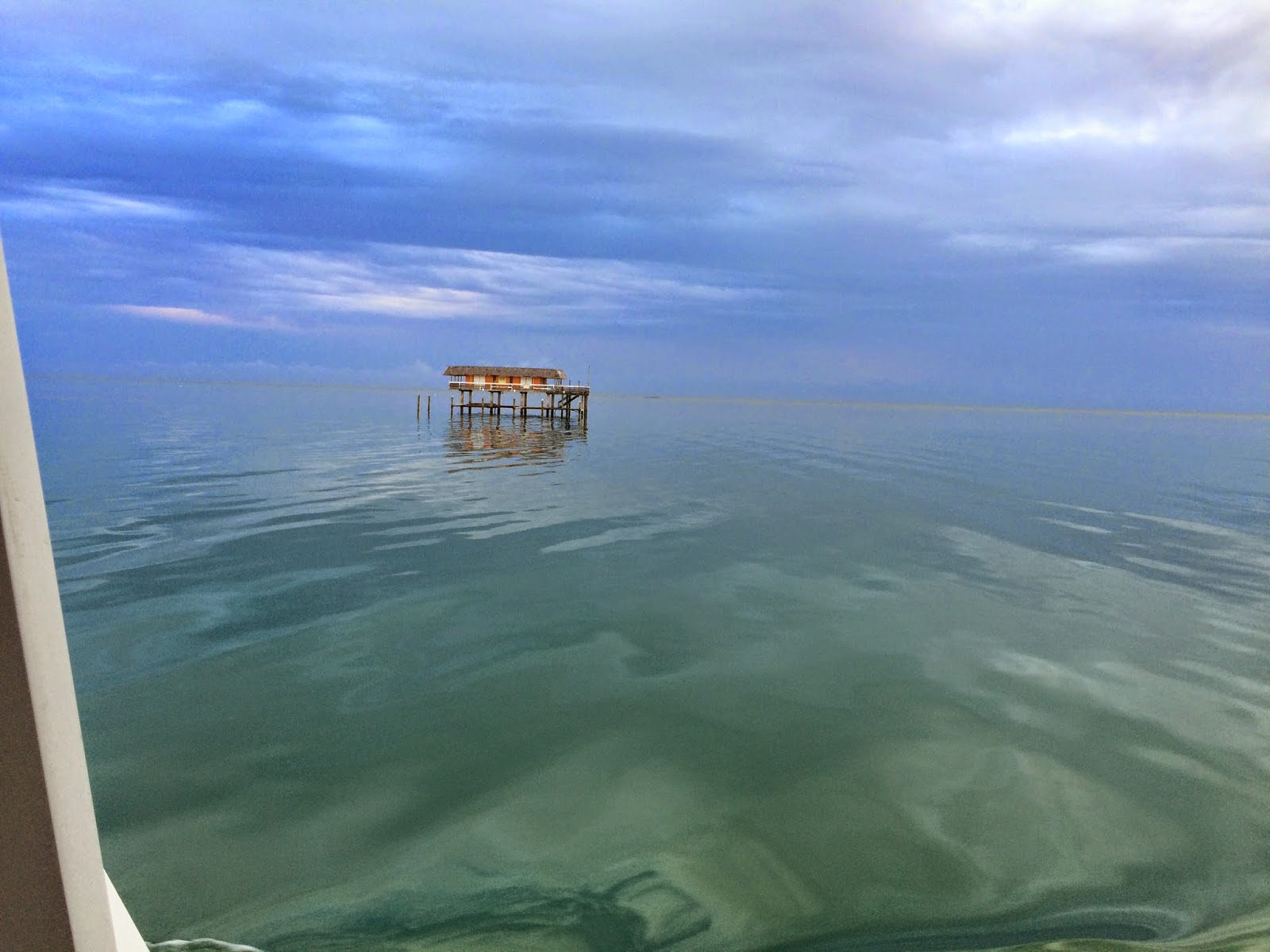 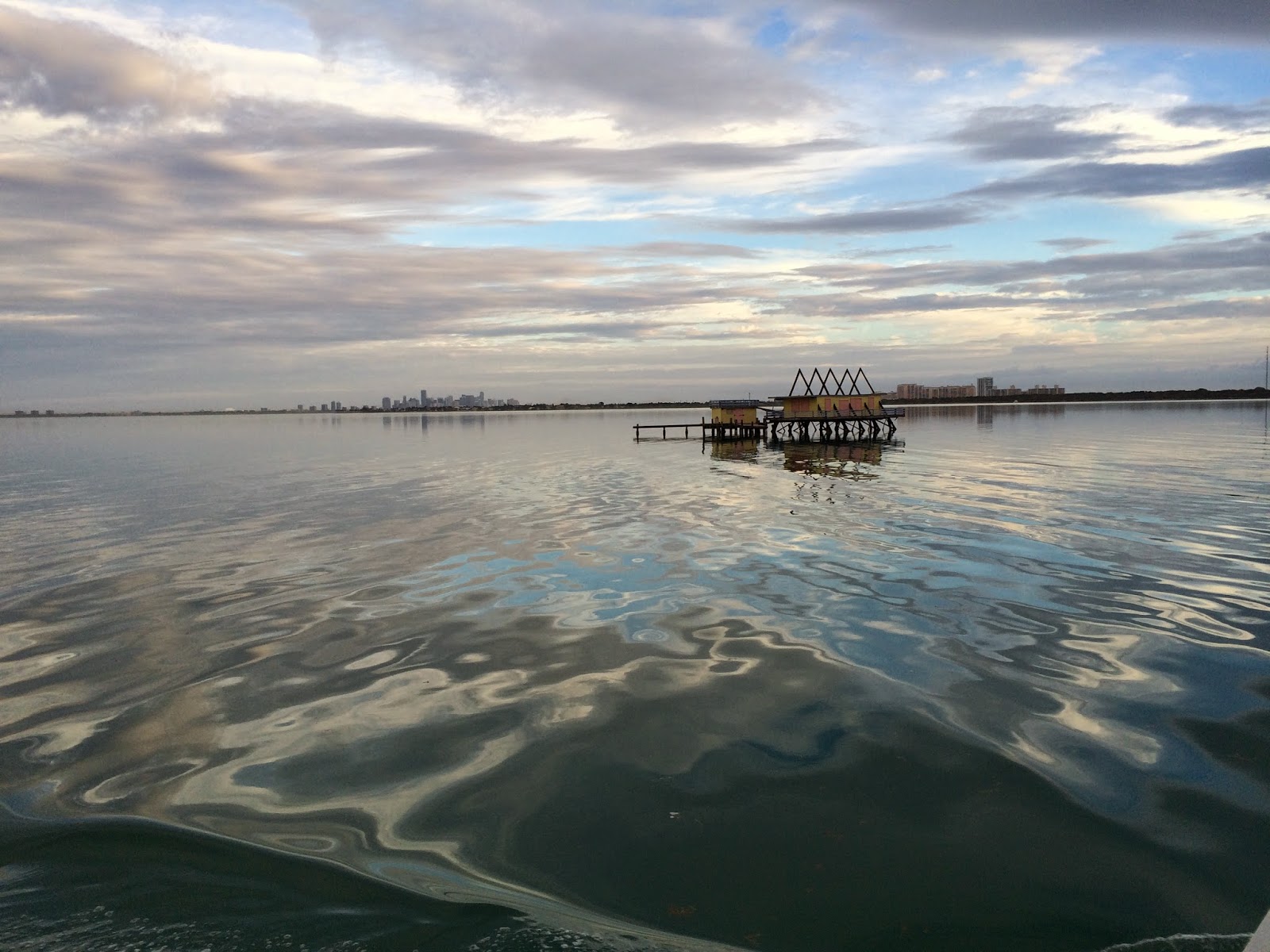 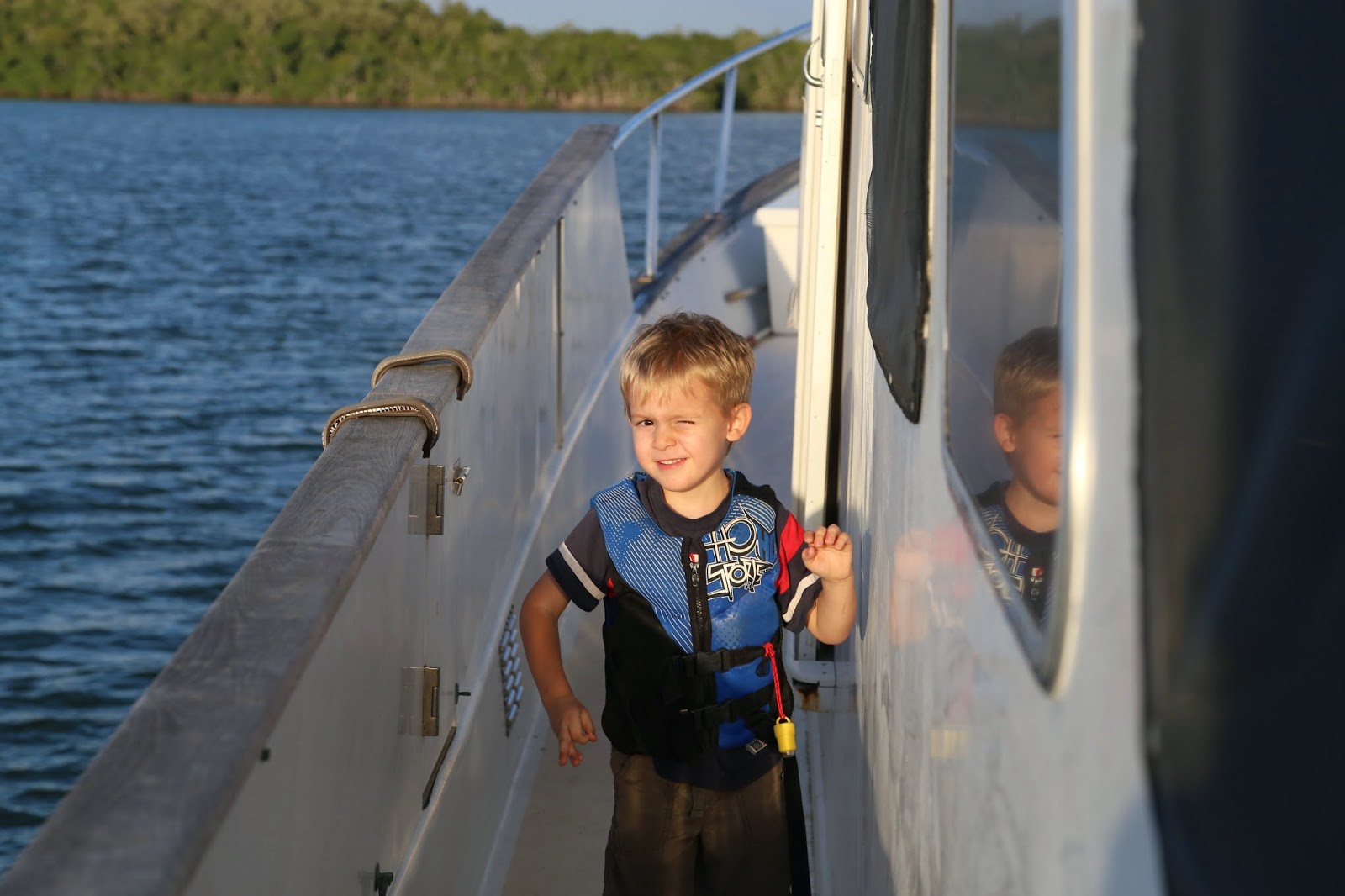 The next morning we slept in a little, and rested, then headed up the river the rest of the way to Stuart.  Where we arrived in time to see the boat yard lead boat leading in another trawler.  Diane and I were able to hitch a ride with them into the boat yard to pick up the Despains rental car.  We made a stop at Walmart to pick up some food, then headed out to the St. Lucie Lock in time to see RCabin go thru the lock.  We then met the boat docking at the Storage Center where we had left the boat all last summer and fall.  We were leaving the next day for a week at Disney World with the Despain family and another Family from Idaho too, the Gardners.  So it was now time for many loads of laundry, and packing for the week. 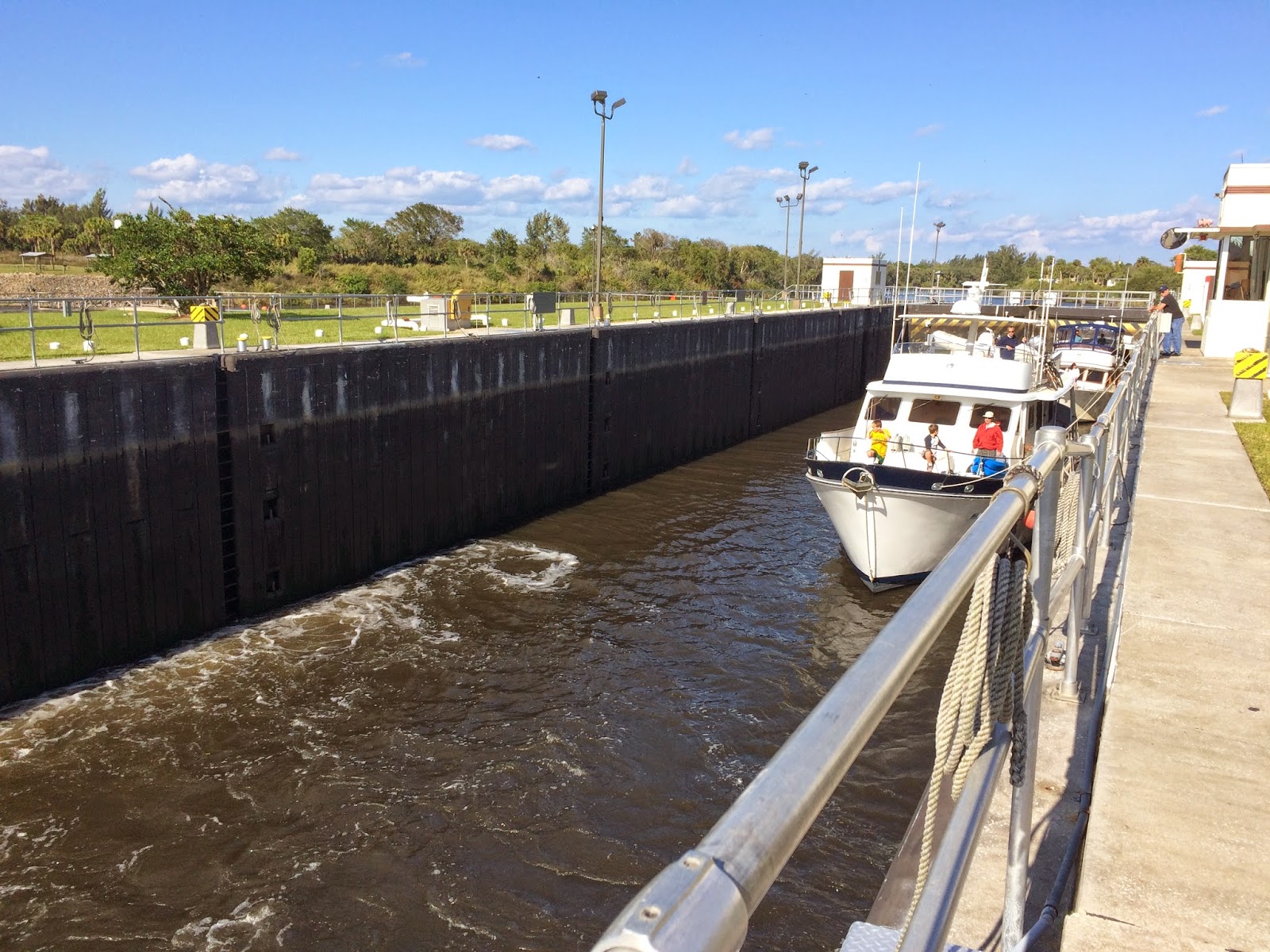 Disney World was of course fun.  But it was sooooo packed over the weekend.  We arrived on a Wednesday and the first few days were fine, but Saturday and Monday were crazy!  We will never go when it is that crowded again!  Lesson learned.  We would get to the park at opening so we could ride lots of rides before the park was even more crowded, but we were not alone in this thinking, and the place was packed from opening on.  In the afternoon and evenings it was wall to wall people.  Not fun.  But we enjoyed being there with friends.  We even met up with another friend from home, a college student, and older sister to one of Isabel's favorite friends.  She is working at Disney as a college intern this semester.  She had a couple days off and spent them touring the park with us.We have been to Disney World about 5 times now and much prefer low season there.  It was cold there, for Florida, so that only added to our frustration. 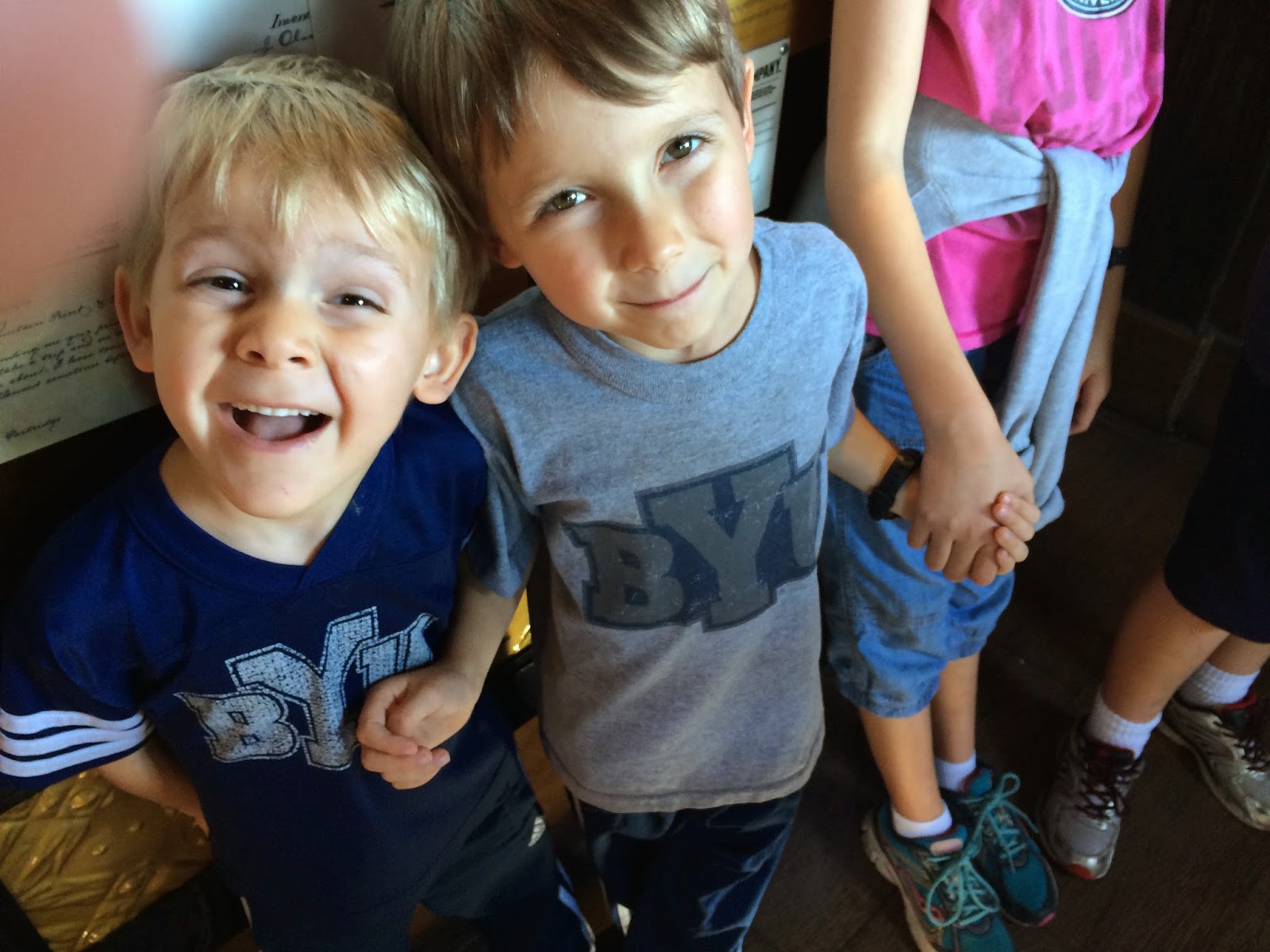 The older kids favorite thing, is Sorcerers of the Magic Kingdom.  It is an interactive game you play in many different areas around the Magic Kingdom. You are sent on a trail to cast spells to defeat the Disney Villains using playing cards you can collect each time you visit the park.  The kids love it, and have played it the last 3 times we have been to Disney World.  The nice thing is you can play this game in the super crowded park without waiting in an hour long line.  There are multiple villains and levels, so you can play over and over.  If you are visiting Disney World with tween aged kids-- I highly recommend Sorcerers.    Our kids would play for hours! 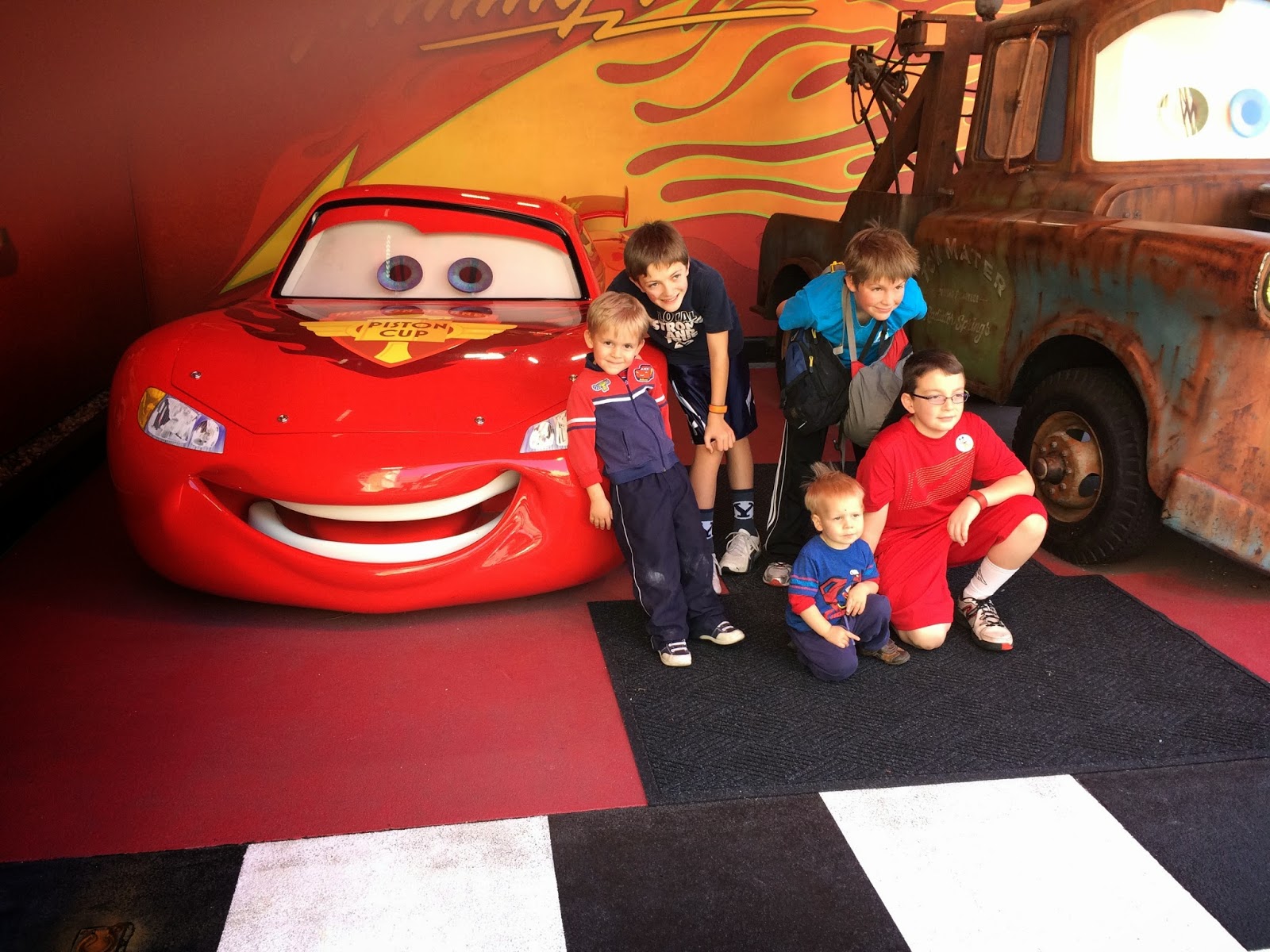 What we enjoyed most was being with friends, and the "firsts" in our family.  Benjamin was taller this trip, and enjoyed riding new rides and rollercoasters this year, such as Mt. Everest and Space Mountain.  Matthew was 3 years older, and enjoyed riding his first roller coaster ever.  He didn't like it too much, but he went at least once on every ride he was tall enough for, even the ones he considered "dark and scary".  His favorite part was meeting Lightning McQueen.  He loves Lightning and gave him a big hug and kiss.  Alex LOVED seeing Mickey Mouse.  He would shout over and over, "My Mickey Mouse!"  He gave him plenty of kisses on the cheek. 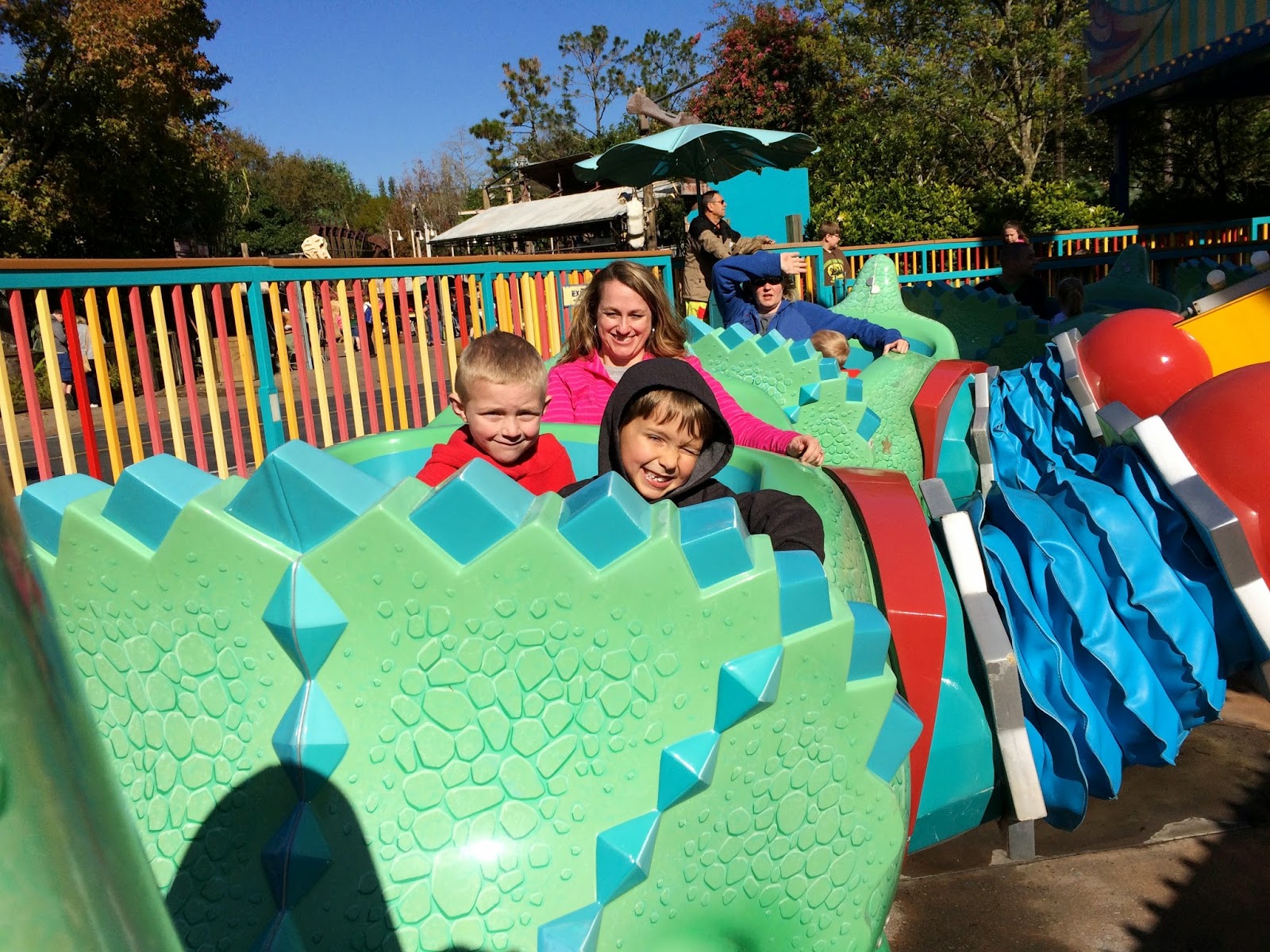 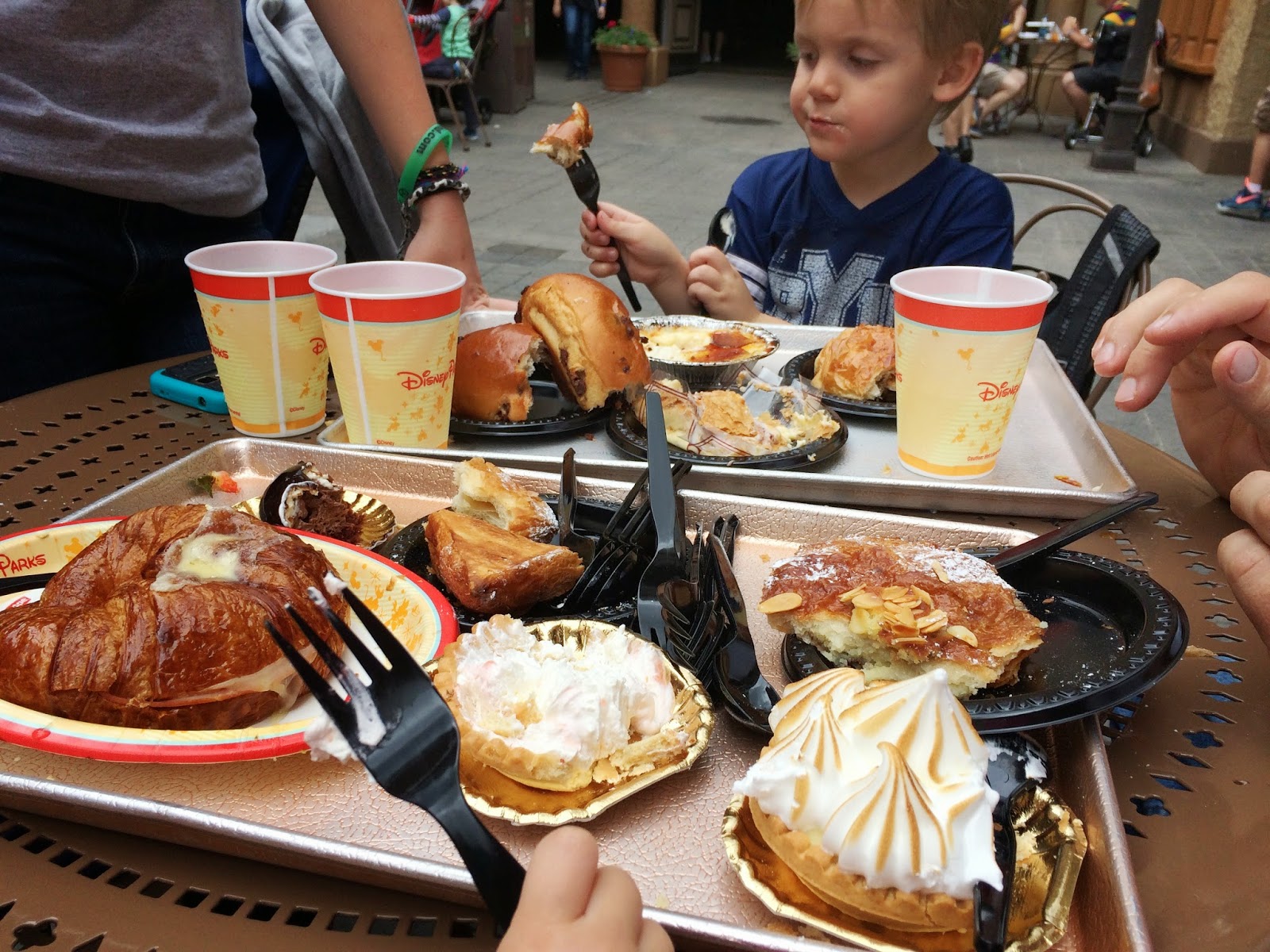 Poor little Alexander woke up Monday morning sick.  We dragged him around the park in the stroller, where he napped on and off, and rode a few family rides.  Finally in the afternoon after another nap and tossing his cookies a few times, we left the older 4 kids in the capable hands of Brittany and Rachel, and David drove me and the 3 younger kids back to our condo, so Alex could rest and be sick.  I felt so bad for him.  He was so sick for 3 days.  By the end of day 3 he had me a little worried, that it was more than a bug.  But on day 4, he woke up feeling better, and a little more like himself.  And by Day 5, he was 100% over it.  Now, let's hope no one else gets it... but Savannah is feeling sick now. 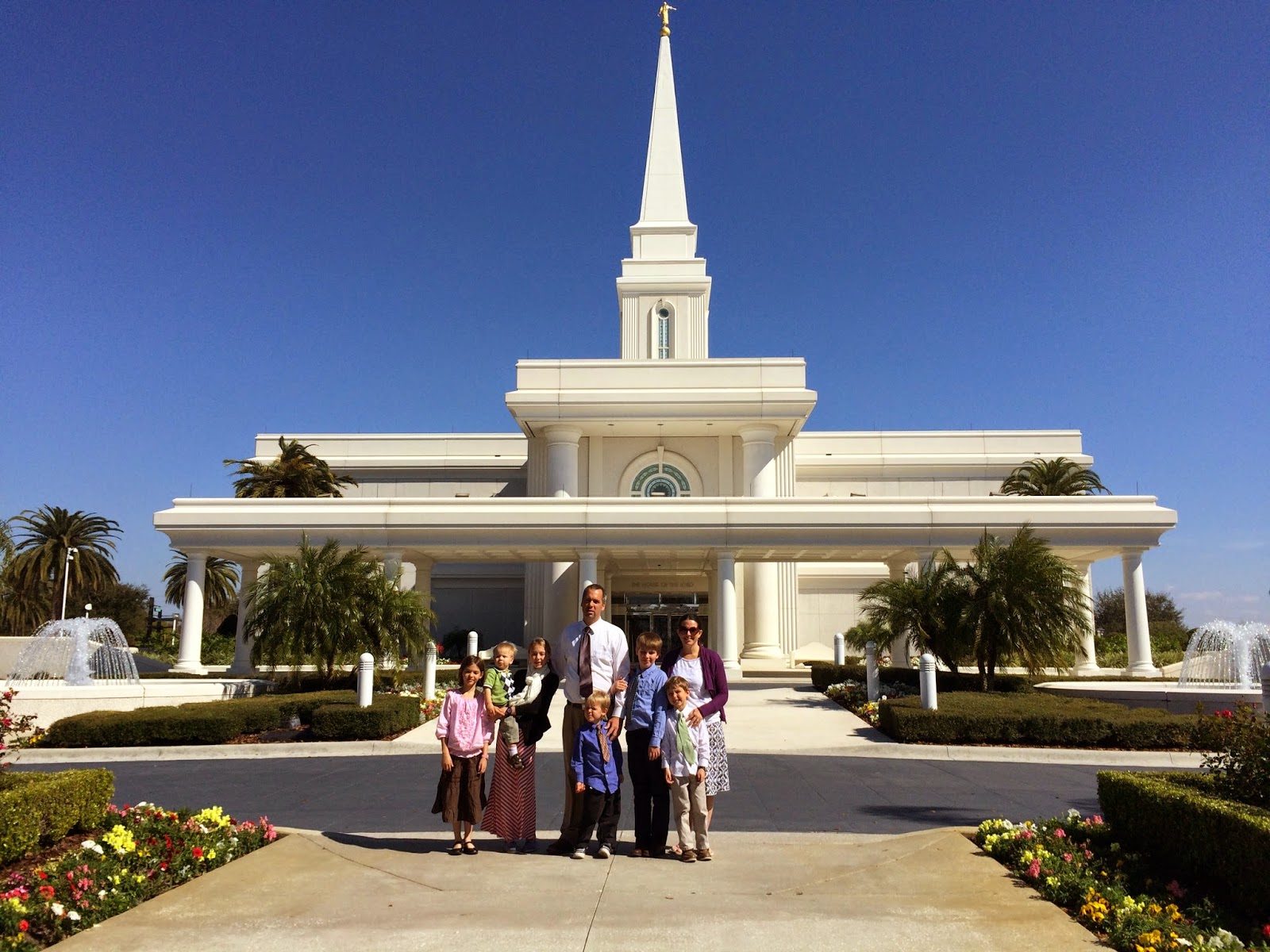 All the times we have been to Orlando, this was our first visit to the Orlando Temple.  After church on Sunday we drove out to see this beautiful place.  We enjoyed walking the grounds and gardens and enjoying the peaceful spirit there.