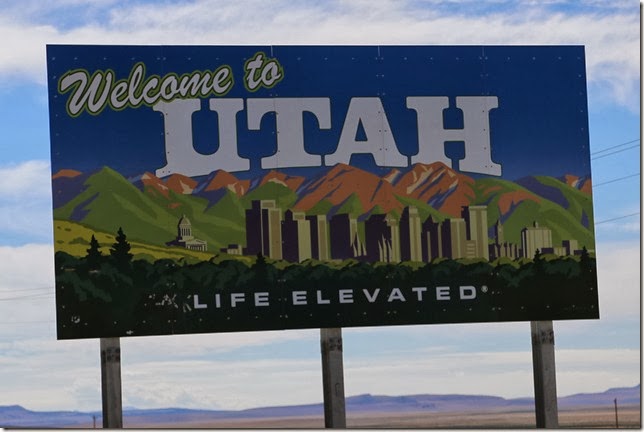 The first stop on our trip was in Utah.  We love visiting Utah.  We made a lunch stop in SLC at the Red Iguana, a little Mexican joint featured on Food Networks, Diners Drive ins and Dives.  One of my favorite things is delicious locally made food.  So this was a fun little stop.  We ordered a mole dish, and 2 other dishes, and had fun sharing and trying new flavors.  My kids are not fond of spicy foods, so they did not love this stop, but I thought it was all good!

David and I both attended BYU for school.  We both spent our years in Utah exploring the beauty of Southern Utah.  If you haven’t been—Go, it is gorgeous!  There are several National parks or State recreational areas to pick from, all over southern Utah.  Last summer we took our 2 oldest kids for an adventure in Zion’s National Park.  We did some canyoneering, repelling and long hikes.  This trip we have 4 kids with us, so we picked South East Utah, specifically Arches National Park, to visit. 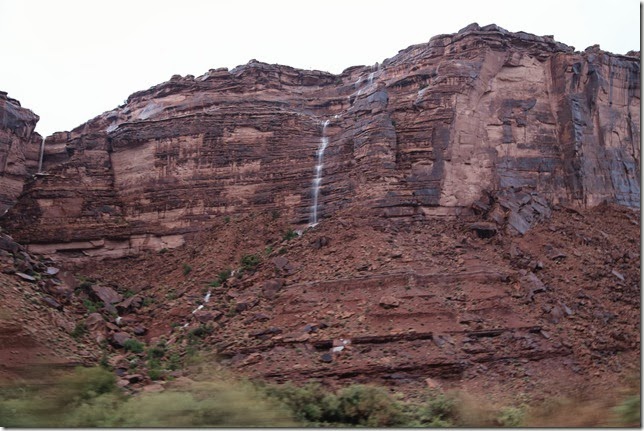 As we neared the park, the rains hit, and it poured as we drove into the beautiful red rock canyons where Arches is located.  We arrived just minutes before the visitor center closed.  We had enough time to pick up Junior Ranger packets and ask a few questions.  We found out that the campground was a 40 minute drive into the park, and most likely full.  But there are several BLM campgrounds outside the park along the river, so we planned to head there.  We also found out that the road to Delicate Arch, the most well know arch, had been closed that day due to wash out of the road from all the rain. Bummer!  We were hoping to hike to Delicate Arch tomorrow.

We headed down the road along the river checking campgrounds for an open site.  Neither David or I had been here in the rain and we all enjoyed the beautiful numerous waterfalls pouring over the cliffs into the river.  We eventually found an open campsite on a gravel pad that wasn’t too muddy despite the rain.  The rain had slowed to a little drizzle which allowed us to set up our tent, make a couple sandwich's for dinner and get all our gear inside our tent before raining again.  We had fun teaching the kids to play rummy before turning in for the night. 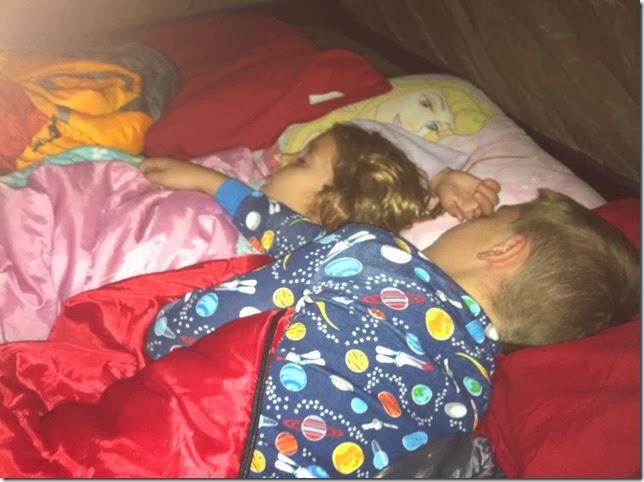 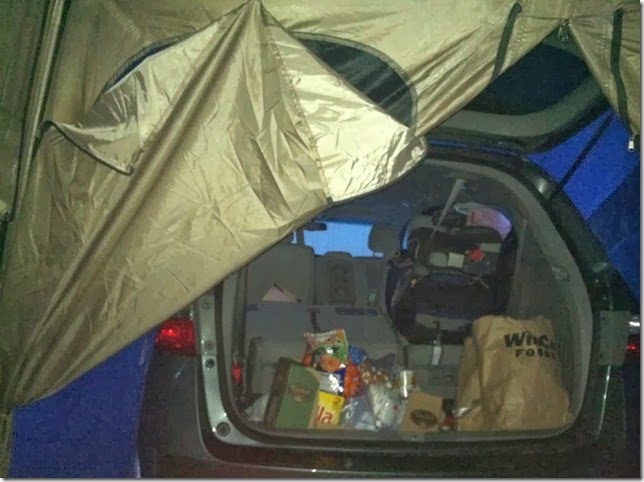 It rained most of the night and the tent held up well.  Just before going to bed Benjamin had given me one of his blankets saying he didn’t need it, he was warm enough.  I told him I would put it on the end of my bed in case he needed it during the night, then he would know where it was. He was sleeping underneath my cot.   Around 4:30am Benjamin woke us up saying “Mom I need my blanket now”  He is so matter of fact, even in the early morning.  I handed his blanket down, and closed my eyes to hopefully go back to sleep.  David decide to ask thought – “Why do you need your blanket?”  Benjamin responded “I’m a little wet”  Turned out he was quite wet.  His sleeping bag and PJ bottoms were soaked.  We hadn’t check the door zipper on that side of the tent, and the bottom had been left unzipped, soaking Benjamin during the night.  He just wanted another blanket though—the cutie.  We stripped him of his wet PJ’s and warmed him up in his dry blanket up on my cot and attempted to get a little more rest. 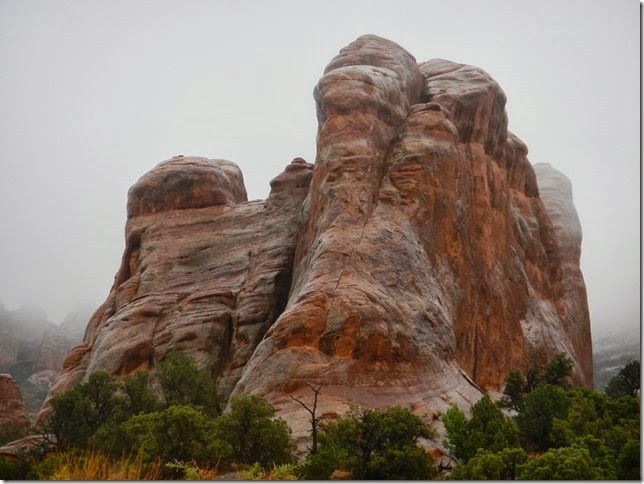 The rain kept pouring.  After all the kids were awake, David decided we should back the car up to the door of the tent.  We were using a cargo carrier on the back of the car.  It swings to side and we could swing it inside tent, then open the back hatch of the van.  The rain died down to a drizzle, so out when David to move the car back.  We grabbed out another tarp and hung it up, half over the car and half over the tent keeping our area between trunk and tent dry from the rain.  And then it started pouring.  It worked out well.  We were able to get into everything we needed, to get dressed for the day, and eat breakfast inside the tent.  We gathered up everything we would need for the day and the kids climbed into the car thru the hatch.  David pulled the car out, and in the drizzle we secured the tarp over the tent. 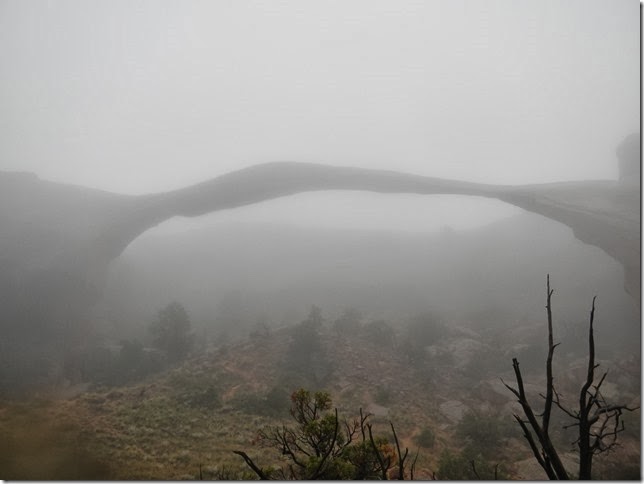 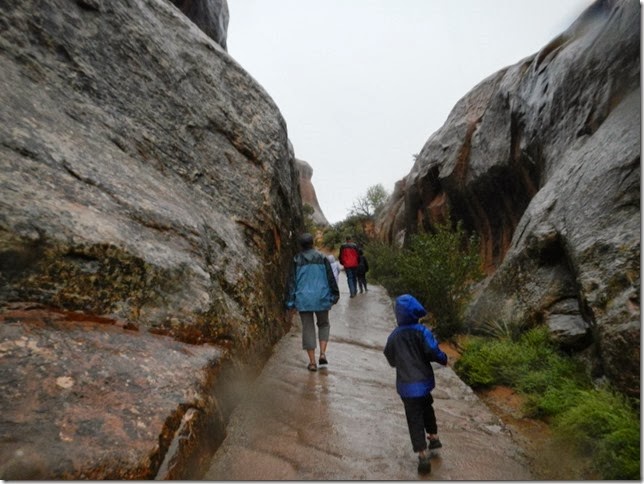 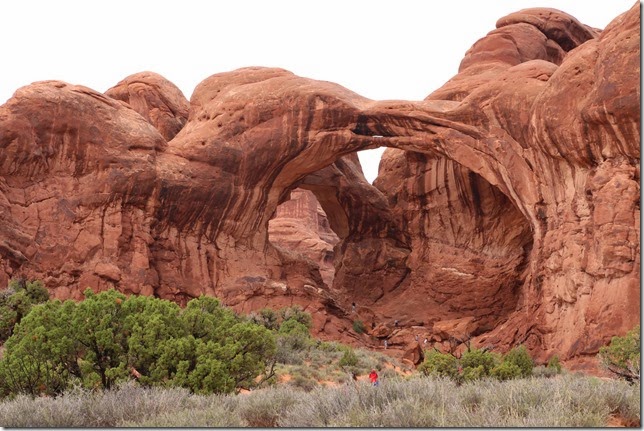 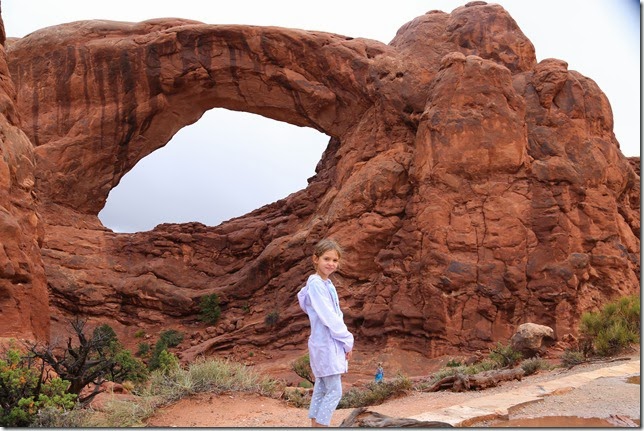 We headed into the Park, back to the visitor’s center to view the displays there and find out what was open and fun to do in the rain.  We drove out to the far end of the park and found the campground to not be as full as we were told.  We had a good night in our campsite, so we had no complaints really.  We made a short 1.6 mile round trip hike out to Landscape arch.  It is one of the largest Arches in the world.  It rained lightly on us, but we were dressed in our rain jackets to help keep us dry.  It was beautiful viewing the landscape in a light mist, it made the rocks seem as though they were covered in frost.  The foggy sky just added to the ambience of it all and made the land seem more mystical. 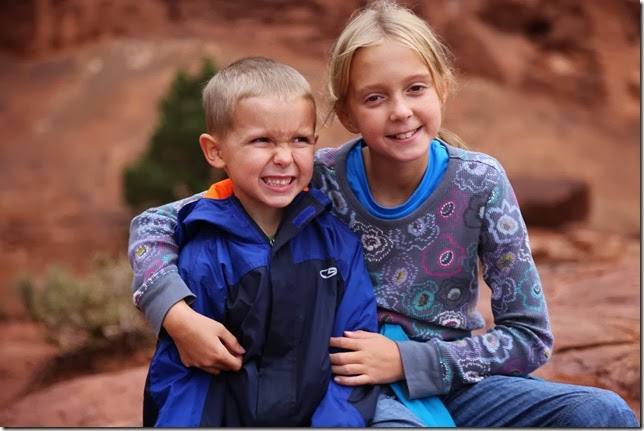 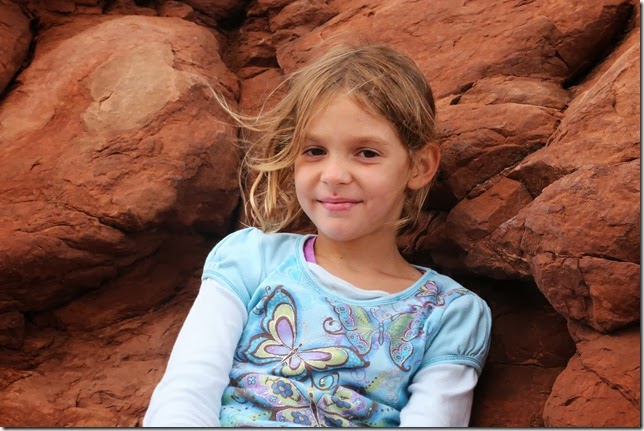 Back at the car we made our way to The Windows section of the park.  By the time we reached this area, the sun was out and drying up the earlier rain.  We did the 3 short hikes in that area.  The kids enjoyed hiking up to Double Arch and climbing on the rocks.  It had turned into a warm sunny day. 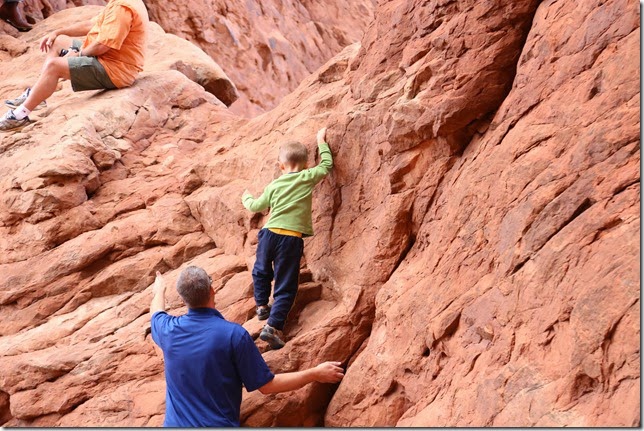 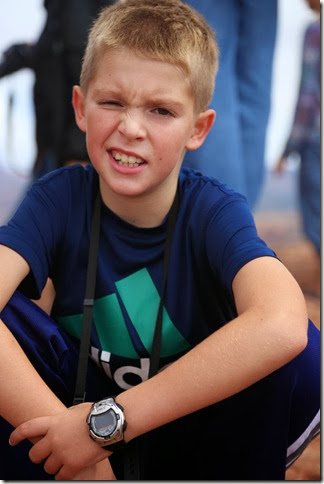 After stopping back at the rangers station and turning in the kids Junior Ranger packets, the received their badges.  We headed into Moab to the Laundromat to do a quick dry on Benjamin’s soaked sleeping bag and the few other items that got a little wet from the night’s rain.  From there we headed up to the Slick Rock BLM area above Moab.  The kids hope to return when they are older for a bike ride through the area.  We told the kids stories of camping there, bike riding, and 4 wheeling in the area.

We head back towards the campsite and stopped at the Negro Bill Canyon to hike out to Morning Glory Arch, which is really a natural bridge. Our hike stopped at the bottom of this bridge.  Years ago, David and I hiked and repelled through this area a couple of times shortly after getting married.  It is one of the pictures we have in a frame in our room.  Repelling thru the canyon above the bridge, you arrive at the top and can double repel over the arch.  The picture we have is of David and I repelling together, one on each side of the arch, to the bottom.  Over the years, the kids have asked us about this picture in our room, it was fun to return so many years later and show them where the picture was taken. Maybe next time we return, it will be to repel the canyon with the kids! 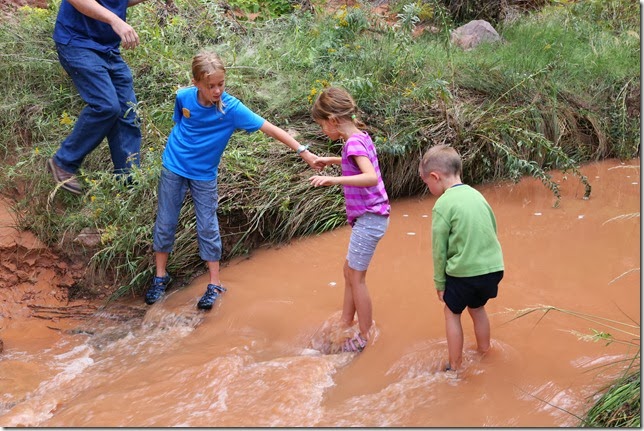 The kids had a lot of fun hiking the Morning Glory trail.  It is is 2.5 miles in and you cross a little creek, not so little from the recent down pour, 7 times.  The kids had a fun time crossing this creek over and over.  Benjamin especially loved every crossing.  It was getting later and later, and we didn’t want to get stuck on the trail at sunset, so we hurried along at a fast pace, and the kids did great. 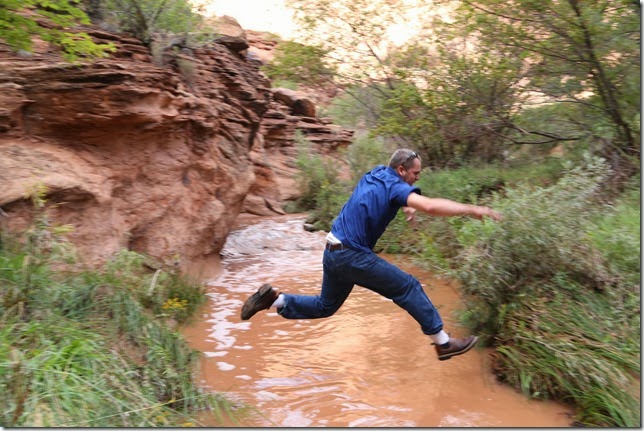 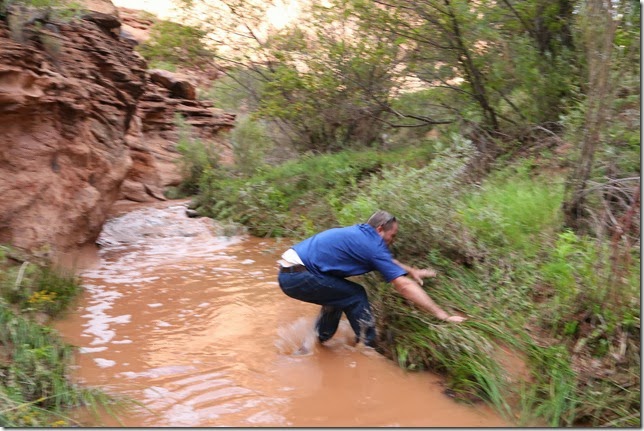 We passed a family about half way down the trail.  The Dad was taking the 3 little kids back to their nearby campsite, and the Mom follow behind us quickly so she could snap some photos of the arch.  On the way back we chatted a bit, and found out they are from Switzerland and visiting the USA for about 6 weeks.  They currently are living on a boat.  Funny thing, in all the places, no where near an ocean, on a little trail, with few people around, we meet a family who also lives on a boat.  Their boat is also currently in the Caribbean, and they headed home to Switzerland, and to visit the US during Hurricane season.  They crossed the Atlantic last year, and are headed thru the Panama Canal this year, and then over the next year will make their way to Australia.  We are wimps compared to the itinerary of some of the sailing families we have met.

After our hike we headed back to our campsite for some yummy homemade soup, and a small campfire with Marshmallows.  It was a clear  night till after bedtime, when the rains came down again.  In the morning we were able to wait for a break in the rain to pack up our tent and head on our way to our next stop.  We were sad to leave beautiful Southern Utah, and felt a little remiss to not stay and see more, Canyonland’s and Dead Horse Point are so close by.  Next time… 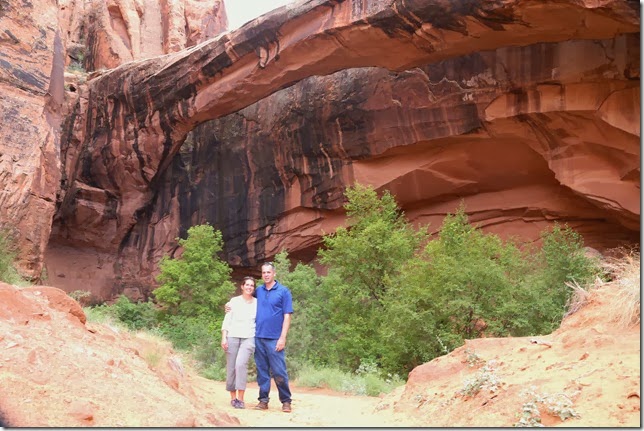