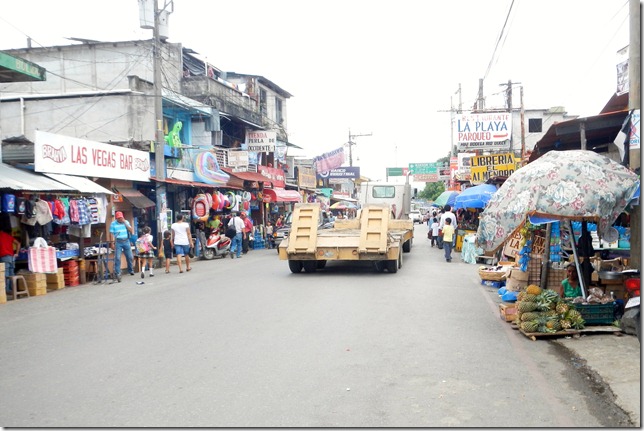 Fronteras, the town here in Rio Dulce is mainly one main street of markets with small streets of homes that spur off the mail road.  There are no sidewalks so walking down the main road with traffic and large trucks coming and going is a bit unnerving especially with a kid or 2 in tow that aren’t use to watching for such traffic. 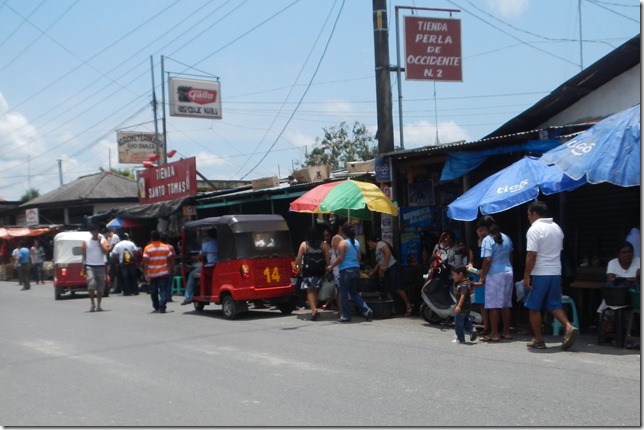 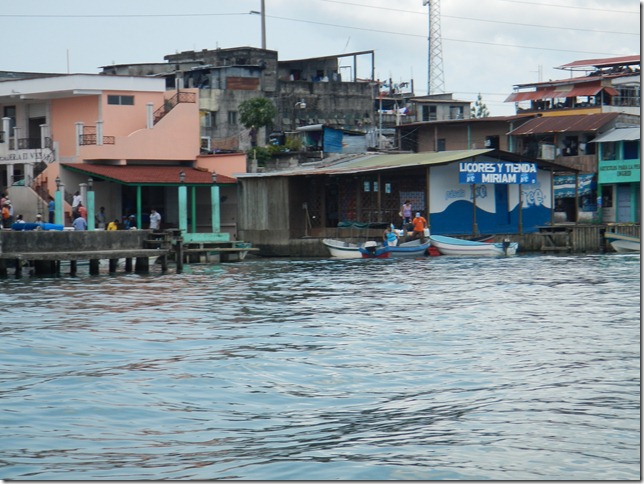 We had been told that Walmart had a store here, but it is not called walmart.  David and I headed into town the first time looking for it, not really knowing if by walmart they meant an actual large building or what exactly, because all we saw were open air markets along the main road.  We didn’t find it.  The next time we went to town we got a little more info.  It is called Dispensa Familiar, and Walmart bought it a year ago, they own several Dispensa Familiar through Central America.  It is the yellow building in the picture below.  The launcha (boat) driver for the marina dropped us at the dock for it.  It is small, but Walmart like, in that they have food and household items for sell.  I was mostly looking for produce and their selection was terrible.  I got a few things and a few Guatemalan products to try for fun too, chocolate and candy.  I also picked up some tang packets.  I had seen them in Mexico and Belize and finally decided we should try some and picked local flavors, such as Tamarind, Guanabana (soursop), fleur de Jamaica (Hibiscus)…  These are Koolaid type packets.  I decided to use them for slushy drinks at lunch.  They were a fun treat on a hot day and neat flavors to try.  I had been making slushy drinks with gatorade mix, but the kids all preferred trying a new flavor over the gatorade.  Made me happy that my kids were excited to try something new and different to them!  We are bringing some home to share, so if you come over for a swim this summer ask to try a tang slushy mix. 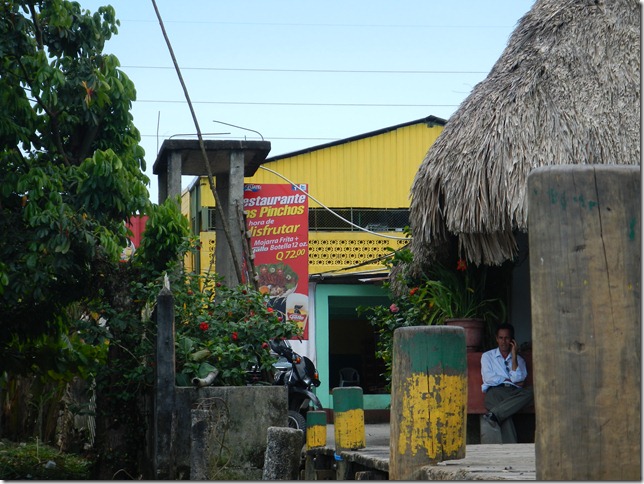 After trying out the “walmart” store and not being impressed, I decided that next time we would stock our produce from one of the larger markets on the main road.  All the shops are outdoor little cabana’s.  Some larger than others, most sell some sort of produce. Grains, rice, beans, and spices are sold from large buckets or bags just sitting on the floor or a table.  Often we’d see women walking with their large bag or bucket or dried corn or rice on their heads. 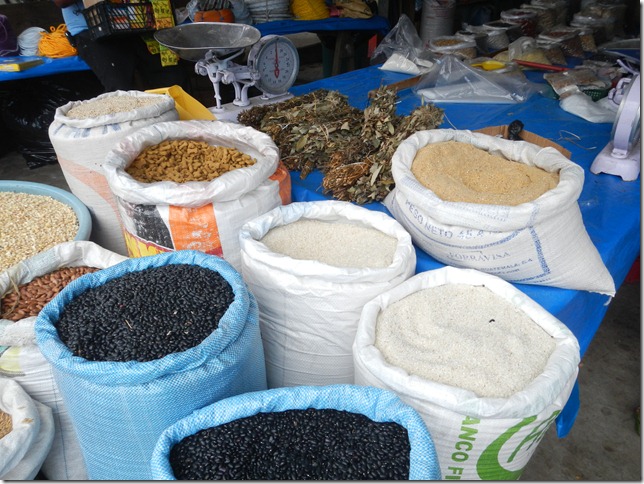 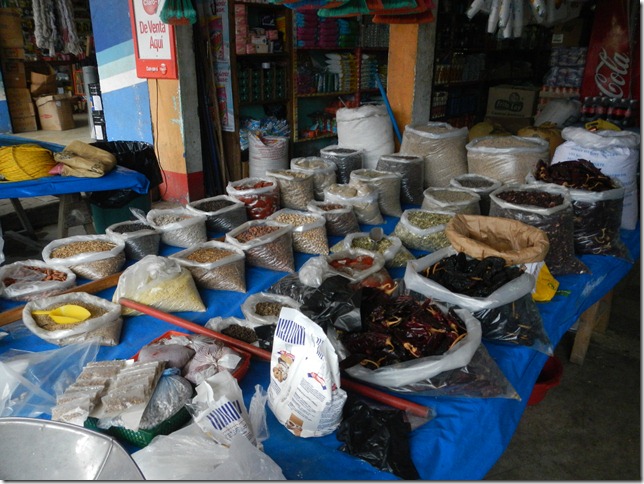 Savannah and I headed into town this week to grab some fresh fruits and veggies.  It was fun just the 2 of us exploring.  David had found out a week ago that the boaters use Bruno’s marina to lock up all their dinghy’s when visiting town, so Savannah and I headed there to dock and lock the dinghy.  The last time I had gone to town with David, there were lots more sidewalk vendors at Bruno’s because of Semana Santa.  I had purchased some honey and sugar coated nuts for way to much.  But the guy selling them to me cracked me up when he pulled this homemade “scale” out of his back pack to “weigh and measure” the bag of nuts.  I should have bargained lower for the price, but I was too amused by the scale that I paid the 50Q he asked for the bag.  It was about $7US for a quart sized bag.  They were a yummy snack too. 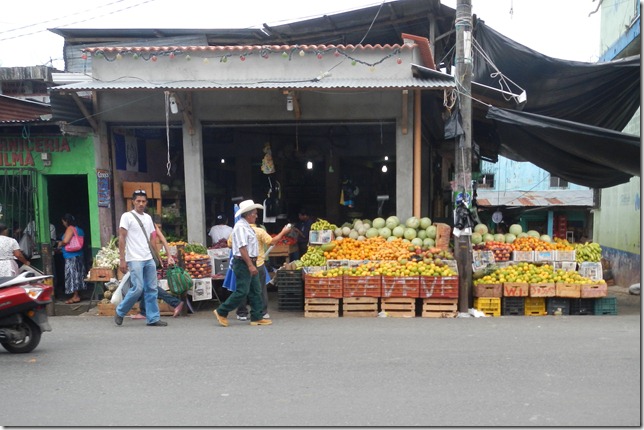 He wasn’t there this time to sucker me into some nuts, so Savannah and I headed straight up to the main road to look for one of the larger produce markets.  We didn’t have to go too far till we came to one with really nice looking produce.  We bagged 2 zucchini, 10 bananas, 2 avocados, 6 apples, and a pineapple.  A worker approached us and asked me something in Spanish that I did not understand, but he pointed at the pineapple with a bag.  I said “si”, hoping he was asking me if I was ready to pay because I was.  He grabbed the pineapple and tore off the top greens, tossed them aside and into the bag it went.  He went thru all the other stuff we had and then told me a price.  I handed him a nearby calculator so I could be sure I understood.  I knew the total started with a 3, but didn’t hear the rest.  He typed the number in the calculator—35Q,  really? I thought, that’s all?  That’s less than $5 US.  Sounds like a bargain to me.  I paid the 35Q and we were on our way.  So happy with the price, we headed to the ice cream shop.  It was only 11am, but it was hot out already, so ice cream sounded like a great idea.  We stopped in a few other little shops on the way looking at clothes or shoes.  It was fun checking stuff out with Savannah. 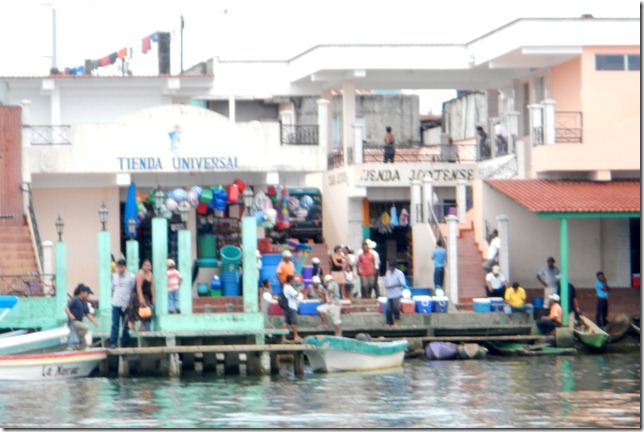 At the ice cream shop we each got one scoop.  Savannah wanted cookies and cream, and I went for Carmello.  Everywhere else we’d been 1 scoop of ice cream was more than $2 US.  While the half gallon of ice cream is still pricy here, to get just 1 scoop is less than $1 US, a good price.  David had to head into town the next day for some hardware items, so I suggested he do the same, take one of the kids with him and stop for ice cream on the way back.  Calvin whispered to me when he came back “dad and I got ice cream!” with a big grin on his face.  He must have been told to not tell any of the other kids.  I told him Savannah and I did the same thing the day before.  He had picked strawberry flavor and said he loved it. 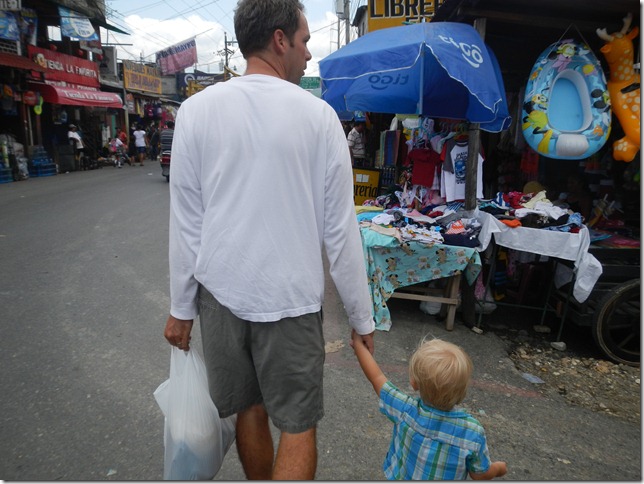 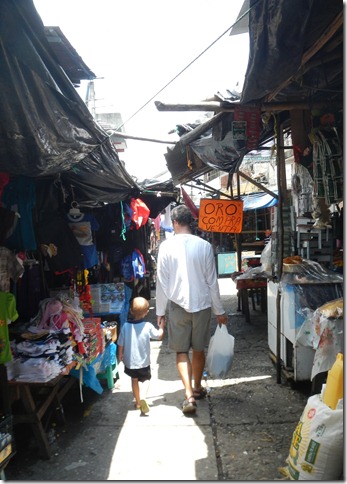 Several days later, we needed more fruits and veggies.  This time David and I headed into town with Benjamin and Matthew.  We bought like 15 bananas, 4 large carrots, and a cantaloupe for 20Q, less than $3 US.  We also got a dozen eggs for about $2US.  The eggs aren’t as cheap, but I am always just amazed at the price on the produce.  Of course I have to put more time and effort into cleaning them when I return to the boat.  We had Matthew and Benjamin with us this time so we took a few less busy side streets.  We walked by the fish market where the fishermen sell their catch right out of a cooler on a dock off the river.  None for us—we are headed home next week so we are trying to finish off all the food we have, the only thing I really run out of is fresh produce.  When we return in the fall I’d really like to try the homemade tortillas.  There are always ladies or kids with baskets of fresh little tortillas and they look so yummy.  But with eating all we have on board I haven’t needed any AND I am a little worried about getting sick.  I won’t be pregnant when we return and will feel a little more daring then I’m sure.  What I really need to do is find a local to teach me how to make them and other Guatemalan food!  Same in Mexico.  We really need to learn Spanish—that would help us asking for things like that so much easier.