We arrived late to Chiang Mai after a long layover in Bangkok.  The resort was beautiful but we were tired and headed straight to bed.  After all we had an early day to prepare for and more touring.

In the morning, after a great breakfast at our hotel, we headed out with Loolu for our Private day tour.  Our first stop was a local market where we picked up some bananas.  But first Loolu asked us to pay him for our tour… which I found odd, and wondered if he was going to drop us on the side of the road after we paid him.  But I think he needed the cash to pay for the day.  And we didn’t just buy some bananas, and they weren’t for us.  We bought a TON of bananas, all for the elephants. 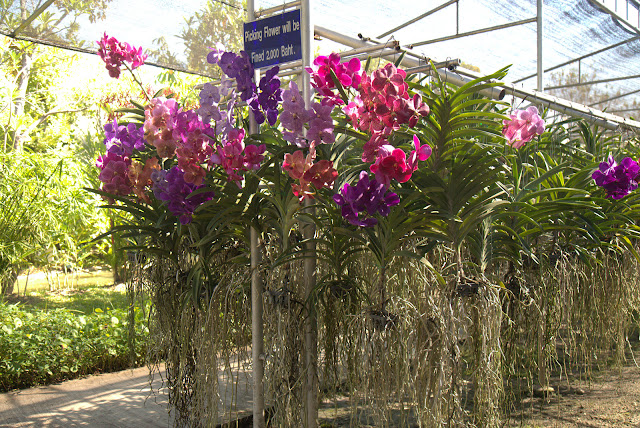 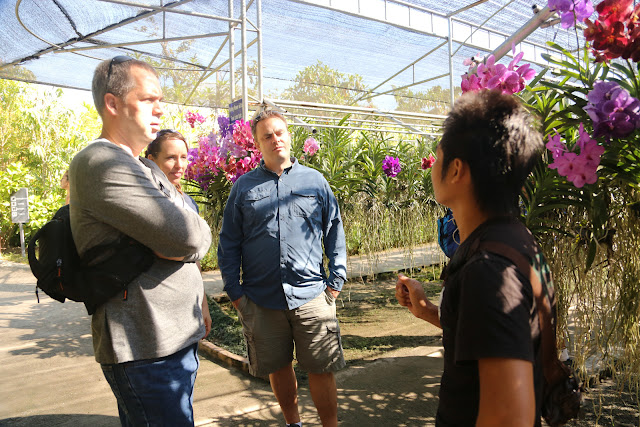 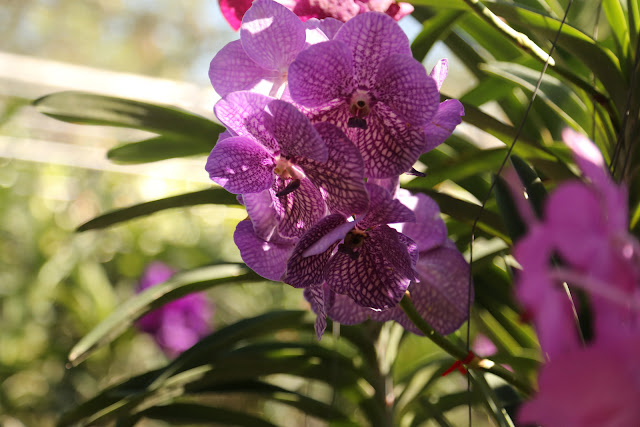 Our next stop was at an Orchid and Butterfly garden and shop.  The flowers were beautiful.  This was mainly a “get the tourists to buy” stop.  But the jewelry they made from the flowers and butterflies really were beautiful, so we did indeed buy.  I got a couple of gifts for my cute girls and David’s Mom.  Caureen and Cody, also picked out gifts for the women in their family. 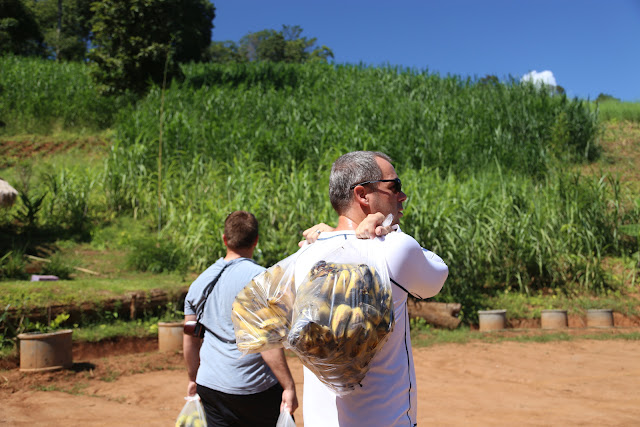 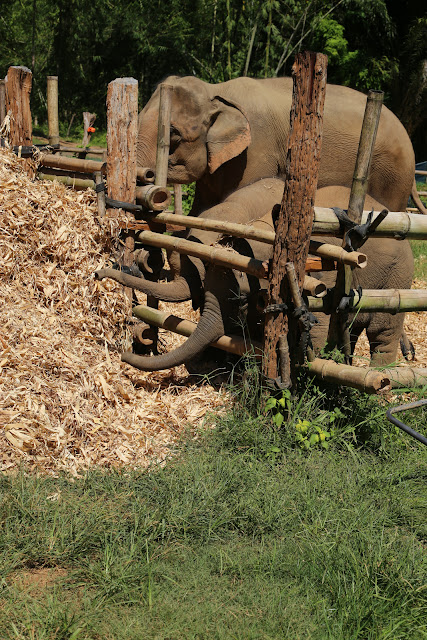 From here we drove up into the hills to the Elephant farm.  We changed into swim suits so we could keep our clothes mud free.  Fenced in a coral area were 2 mom elephants and their 2 babies.  They could see us coming with the bananas as we walked down the dirt road from the truck.  They lined up at the fence ready to eat.  We entered the coral and boy were they aggressive.  They would follow you and grab at the bananas.  The babies were worse, but the sheer size of the mothers reaching for those bananas had me just a little scared.  You can either place the bundle of bananas straight into their open mouths, or they will quickly grab them from you or the ground with their trunk.  Which is really helpful when you drop them all the time like me.  They were big, grabbing animals, and I was just a little frightened. 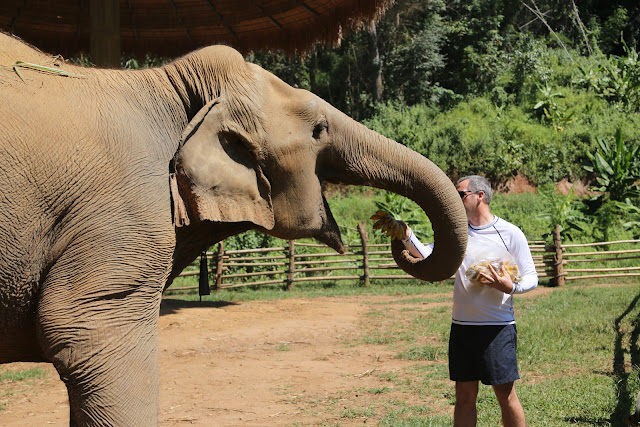 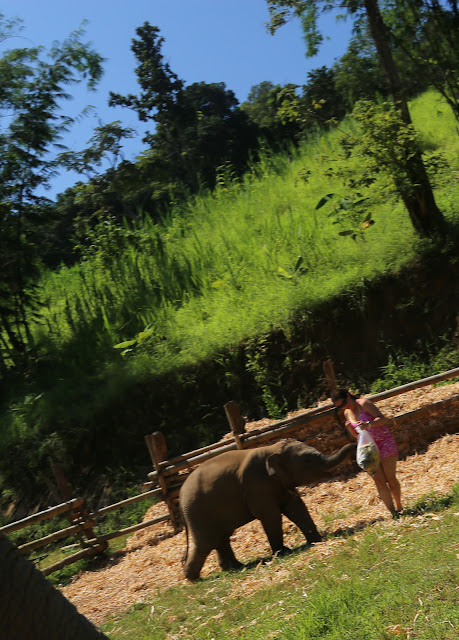 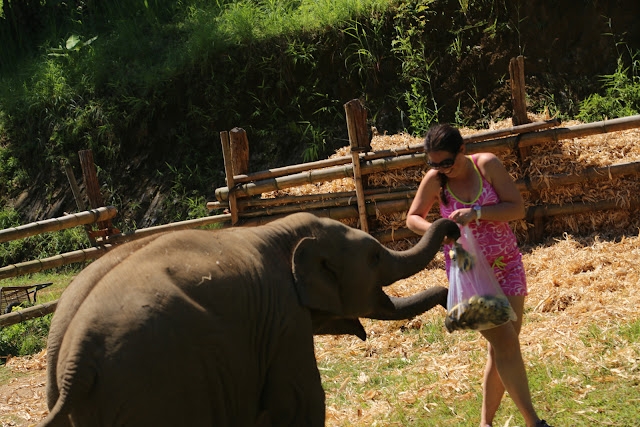 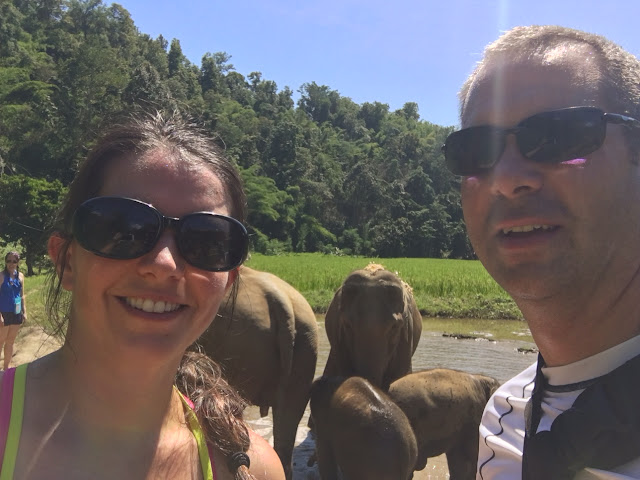 After feeding the elephants and watching them play, we took them to a mud pit, just outside their pen, and “washed” them with mud.  Really we threw mud at them and rubbed it in.  The babies would lay down and roll around in the mud.  They were much easier to approach in this position.  Only Caureen and I were brave enough to get in the mud pit and “wash” the elephants.  David and Cody, watched from the sidelines. 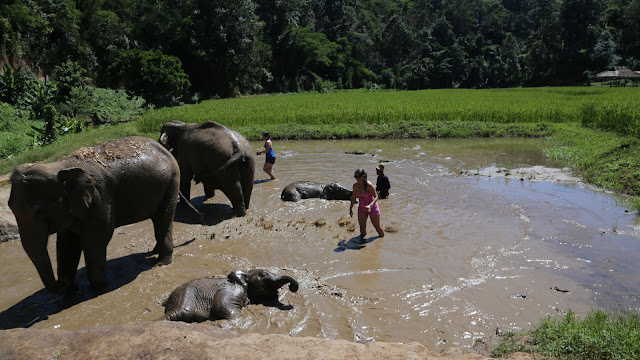 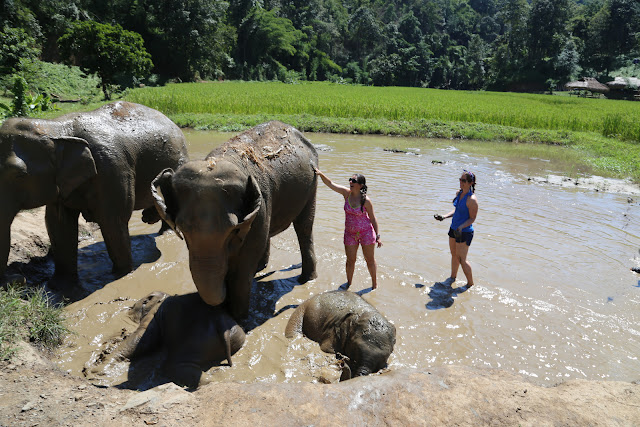 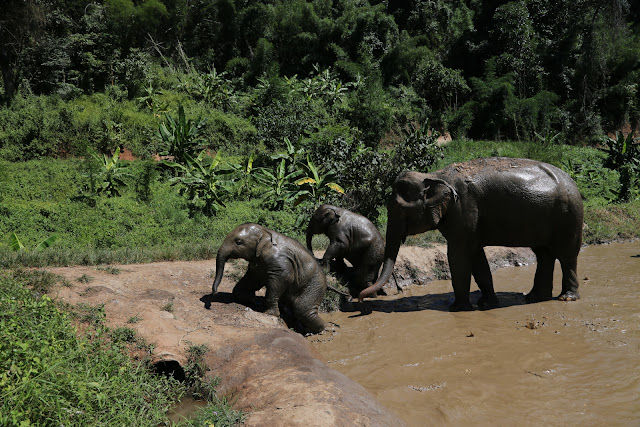 From here we walked with the elephants down a short path to the river, where we rinsed their mud bath from them with buckets.  After throwing a few buckets of river water on the elephants from near shore, David dumped a bucket of water on me! And I’d like to add that a few drops of icky river water did enter my mouth—this is how I got sick days later, I’m sure of it!  Apparently, David was upset I was throwing water at the elephants and not him, so I kindly returned the favor and dumped a few buckets on him.  After the water fun, we walked back through the rice fields to the change rooms and showers, to rinse all or mud and river water away.  Good chance the shower water was from the river, but, at least I was less muddy now. 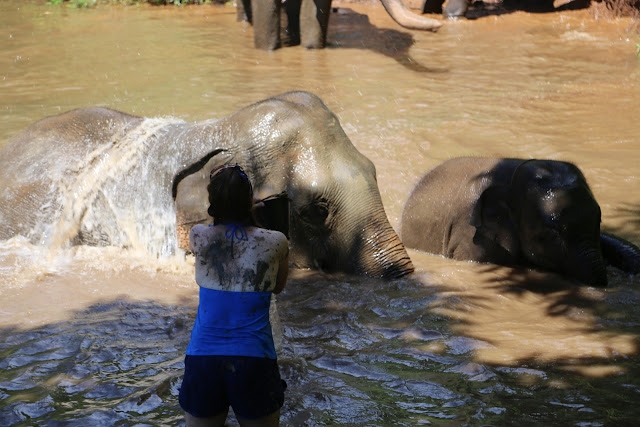 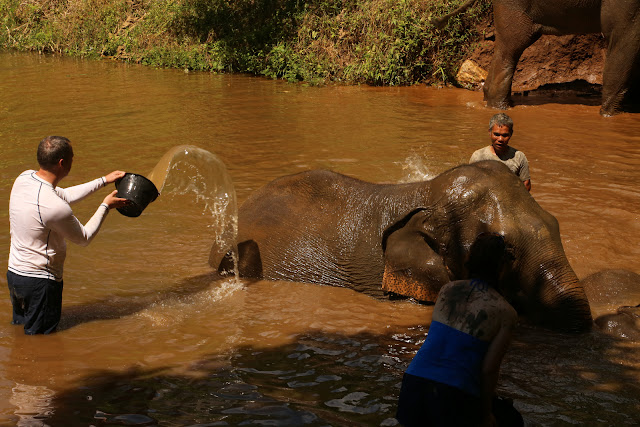 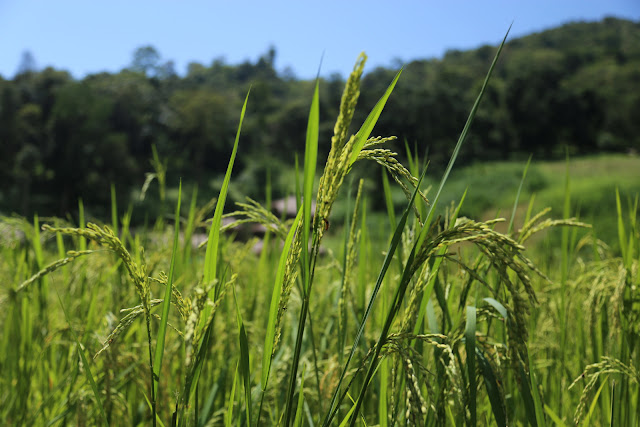 We said goodbye to the elephants, and hoped in the truck.  Lulu made us ride in the back since we were all still wet.  It was a few minutes ride down the road to the road side shack where we had lunch, yummy vegetarian pad thai.  Lulu stopped at a grill on the road to pick up some chicken skewers, but Cody hopped out with him, and was concerned the food wasn’t safe, so we stuck with our veggie pad thai and bottled water.  Here we saw more tour group like ours, this is clearly an area the tourist come probably on a similar sort of tour… elephants first, lunch, then river activities. 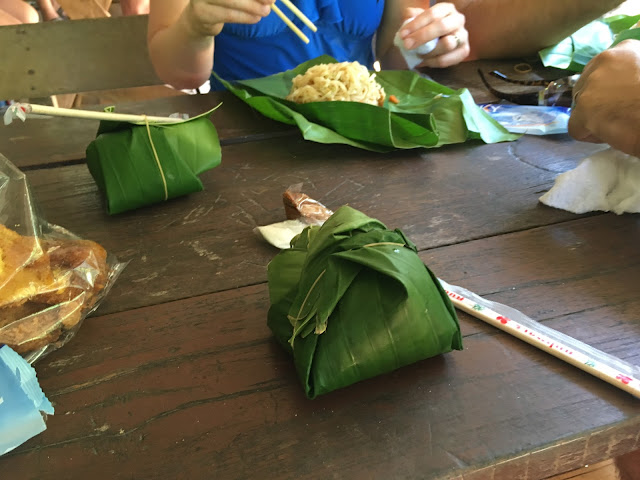 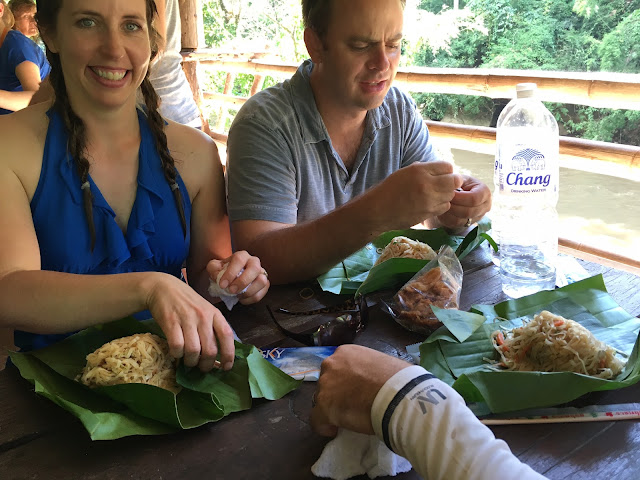 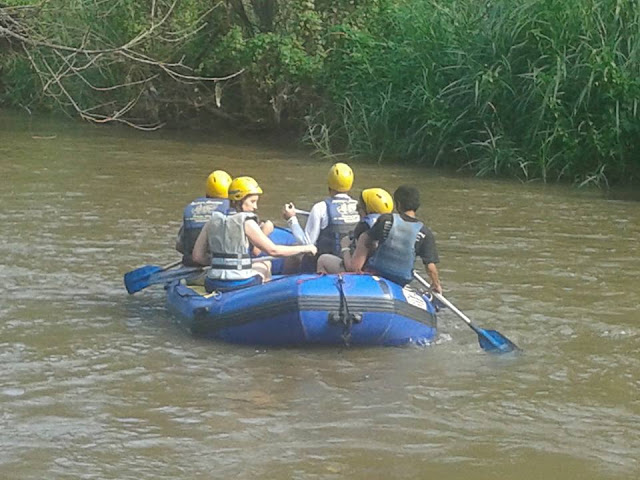 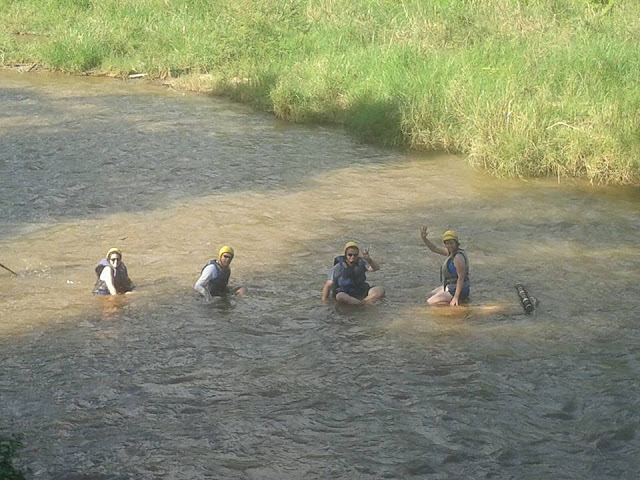 Back in the truck, another mile or so down the road and we reached our next stop—white water rafting.  By far out of all the adventures in life I have had—I’m a little scared of white water rafting.  I can only handle a lazy river, any sort of rapids freak me out.  Well this wasn’t big white water that’s for sure, and I did survive… but there were a few rapids that had me thinking some unkind words about the person who booked this tour for us…Caureen.  I did live, so I guess we can still be friends.  After our white water rafting, we transferred to a bamboo raft, but it was more like a bamboo wading tube, in that we weren’t quite floating on it, more like half sinking.  We had a lot of fun joking about it. And just when we thought things couldn’t get more exciting, we ventured to the little road shop across the way where we found a huge roach.  Loolu assured everyone there it was safe to pick it up and touch it, so one of the other tourists at the shop did, and it bit him. 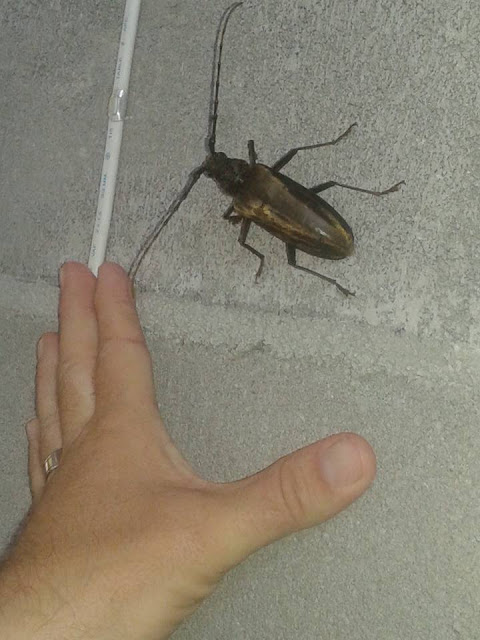 Next stop of the day was to hike up a short trail to a water fall.  Once we reached the waterfall, David checked the depth at the bottom of the pool and then made the quick hike to the top of the fall, it was maybe 15 feet tall.  He slid down the fall into the pool.  That water was cold, and although it was hot out, I still don’t like cold water, so I watched from below.  Caureen is much more brave—remember she booked the white water rafting, so of course cold water doesn’t bother her.  She also hiked up and slid down the fall.  Further down the fall stream was a short water slide that wouldn’t dump me all the way under, so I braved the waist deep slide on the way down to the trail back. 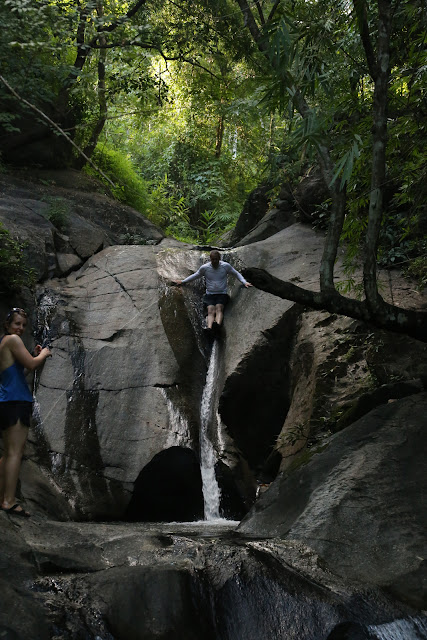 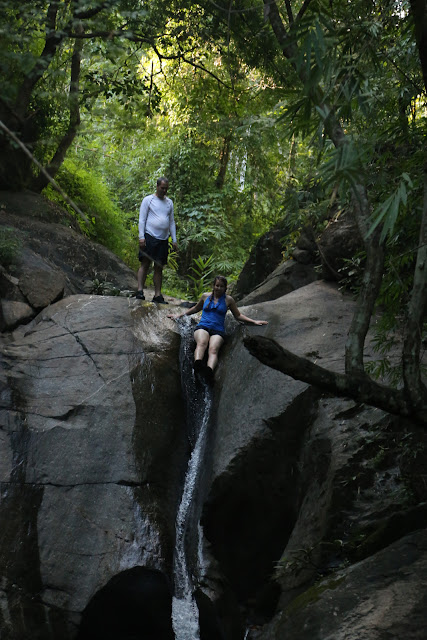 Hiking back to the truck, we went across the street to a place that had decent enough toilets and changing rooms.  Back in our dry clothes we were now allowed to ride in the truck/car again with Lulu.  Our last stop of the day would be to see the village people.  Here were a few different tribes living in a small village together.  Among these tribes are the long neck people from Burma.  As Lulu was telling us about these people and how they came to be in this village in Thailand, his accent made it so I misinterpreted a few things.  I thought he said “they killed someone, and now they come live here.”  What he really said was “they tell their cousins, and now they come live here”  It’s a good thing someone asked to clarify what he was telling us, I was a little nervous about seeing these people. 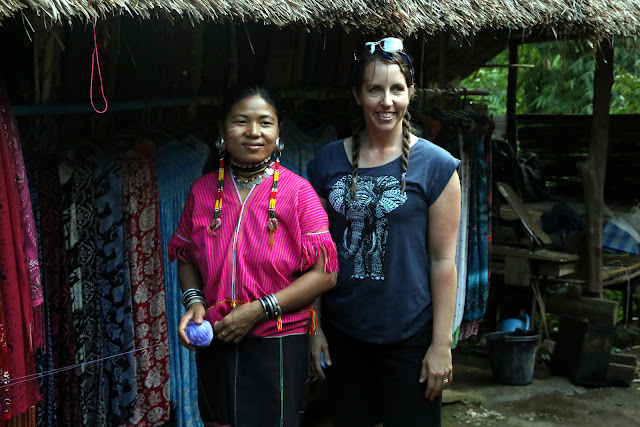 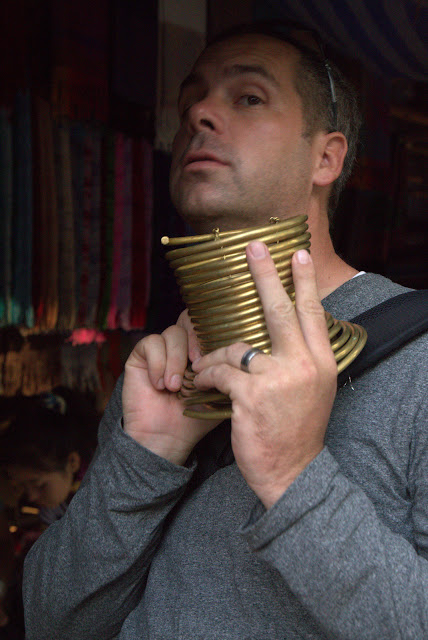 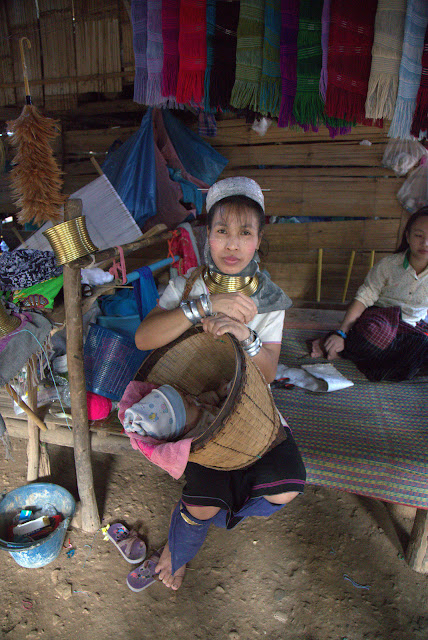 It was getting late in the day when we arrived, most of the tourists had probably come earlier, there weren’t many others around.  We walked thru their little local market where different tribes had different stalls to sell to tourists.  Some items were just like the ones we saw in the markets of Cambodia.  They must all buy from the same manufacturer.  There were a few ladies working looms, making scarfs, so I did buy one of their scarves.  And the children were very interested in selling us their embroidery bracelets, so we each bought a few of those too.  It was very sad walking thru here, it makes you wonder if it is all for show, if the women are forced to continue wearing their long neck necklaces, or bands around their legs, or giant earings… just for the tourists that come.  Were we contributing to the continuation of these practices, or do they still believe in them whole heartedly? 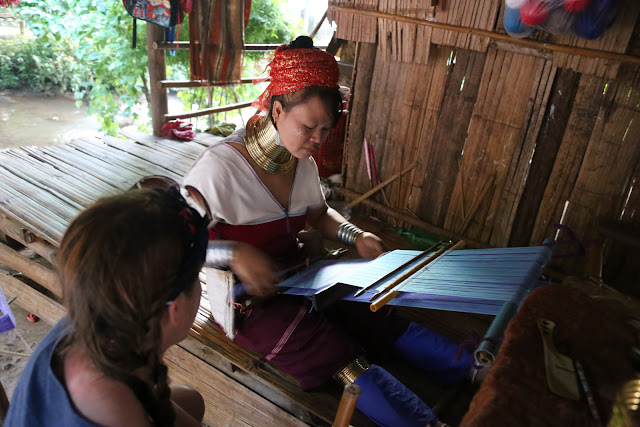 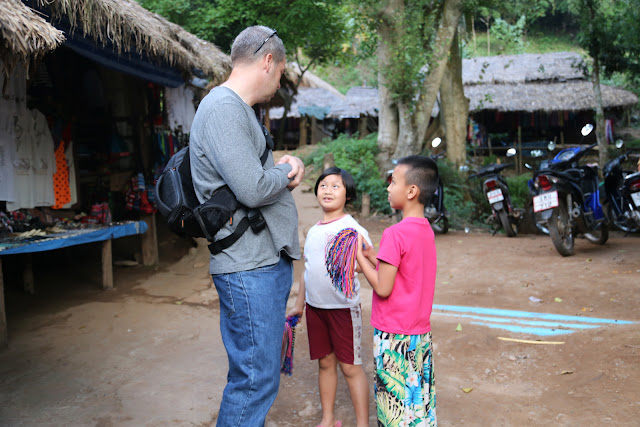 After a full day, we arrived back at our hotel at nearly 7pm.  We decided to head straight to dinner at the hotel restaurant, to get to bed early.  We were all exhausted.  The food was delicious.  Dinner was a large buffet of Thai/Asian cuisine with a few other varieties mixed in. You could order a small pizza or pasta, cooked in front of you.  I picked a squid ink pasta with a pesto sauce.  The dessert case had several choices.  Between the 4 of us, I think we tried at least one of everything.  It was all quite yummy.

Nights and mornings were the best times to call home.  As we were about 14 hours ahead, our night was the kids’ morning, so we were able to reach the kids as they were getting ready for school and sometimes join them for morning prayer to start their day.  What a great time we live in. The technology we have makes it so easy and inexpensive for us to call each other from all over the world.

In the morning after breakfast, Caureen and I had enough time for a trip to the Spa before we had to leave for our flight.  We enjoyed a nice Traditional Thai Massage, which involved stretching, and pressure.  The Thai masseuse use more than their hands to apply that pressure, elbows, knees, feet.  I think she was kneeling on me, and I envisioned standing at one point.  But I was face down so I couldn’t tell.  It was certainly an interesting massage, and relaxing too.  An hour, for $28 USD

The husbands had packed and were ready to go when we strolled back from the spa.  Time to head to the airport to begin our next adventure, and a beginning it was!