Back to the Boat

Time to head back to the boat.  We had planned to leave in October but then decided to wait a little longer, maybe move the boat to Puerto Rico and start our trip from there.  Well David only got as far as Marathon Florida, in the Keys and so we decided we’d start from there with the kids.

So the day after Thanksgiving, Black Friday, we spent flying to Florida.  It was a long day with a lot of travel, but we made it and the flights weren’t too crowded.  In fact we had plenty of room to stretch out.  On our first flight we received one upgrade to first class, so we decided to let Madison, our nanny for the trip, take that seat.  David and I sat in the back with the kids.  We had 3 flights to get to Miami.  On our last flight we were given 4 upgrade seats in first class, so David and I invited Isabel and Benjamin to sit with us in First Class.  They were very excited.  They did everything together.  They watched Nemo, they tried everything on their meal together, but a bit of the reward was lost on them.  Savannah and Calvin each took a turn sitting with David while I spent take off and landing in the back feeding Alexander.  Then Savannah enjoyed the treat of “babysitting” Alex while I sat up front.  At one point I went back to check on her and found her holding Alexander and still playing a game on the Itouch.  I was impressed. 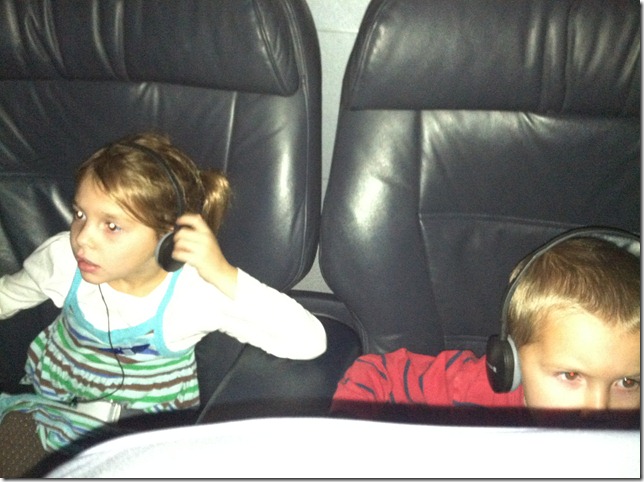 After spending all day flying, we arrived at 10pm eastern time in Miami.  We had planned to spend the night there, shop for provisions the next day and then make the 2 hour drive to the boat.  We had a lot of provisioning to do.  I had made a pretty good list before leaving Idaho and we were able to split up into 2 or 3 groups to get all the stuff we needed.  It still took a long time.  Most things I planned to have for the next 6 months, and others for 2-3 months till we reach Puerto Rico and can visit a Costco there.  Below is our chain of carts from Walmart.  You might not be able to tell, but the third card is being held on the bottom by Benjamin to the 2nd cart.  and the 4th cart is being held on by Matthew to the third cart from the kid seat up top.  It was quite the train. 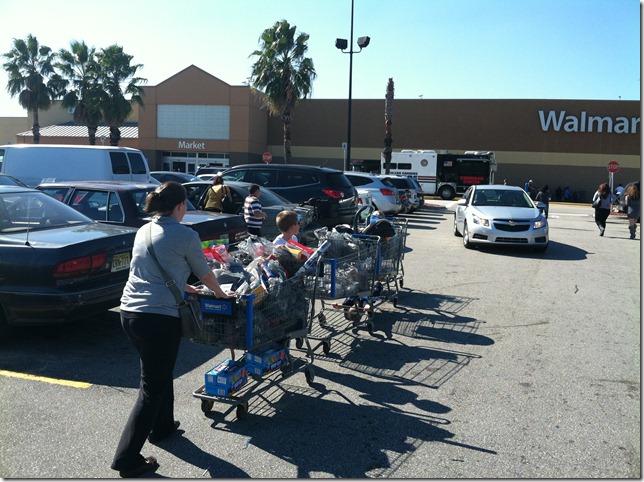 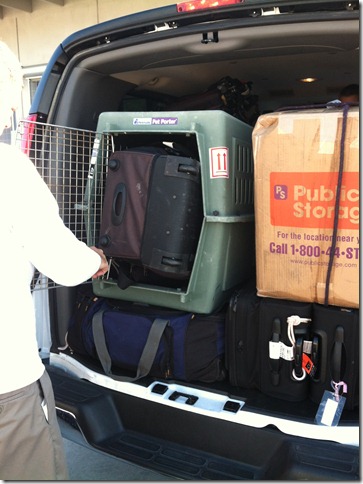 Then we had to fit it all in the rental van.  I should have ordered the 15 passenger, the 12 passenger was just not quite big enough.  Oh it was soooo full, and we still had to go to Costco.  Between Walmart and Costco we had to make a stop at the airport again to pick up Jessie, our dog.  She flew out on the 23rd, same as us, but she couldn’t go on the same planes, the one out of Boise that we took wasn’t big enough for a dog in a crate her size, so she had to wait for a later flight, which meant she had an overnight layover in Chicago and arrived in FL the next day.  She was so happy to see us!  We were excited to bring her on our adventure with us and decided the week before we left to make arrangements so she could come.  You’ll have to check in to see how she likes living on the boat with us! 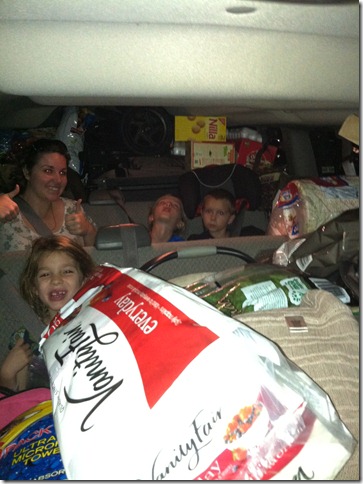 Here we are playing sardines in the van.  We did make it to Marathon all in one piece, just a little stuffed and tired.  Now to haul it all down the dock and to our boat!