Alexander and the NICU 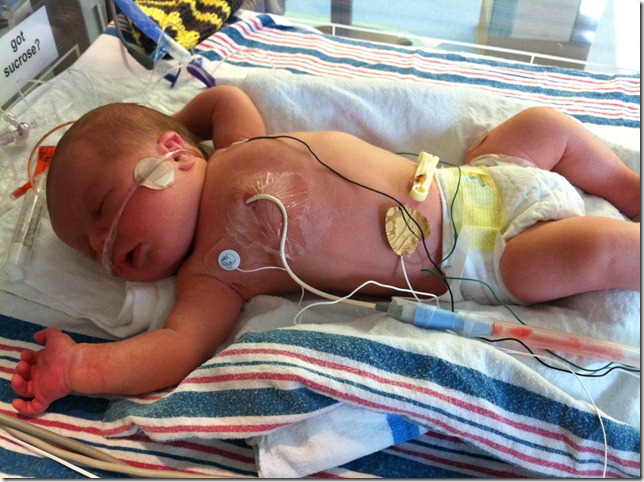 When Alexander was born his aveoli’s did not open all the way in his right lung.  This made it difficult for him to breath.  During the hours following his birth he was able to stay with us in the family maternity ward while we monitored his labored breathing and O2 stats.  The nurses hoped that he would “transition” as they called it, and open his aveoli’s and begin to breathe normally.  NICU respiratory therapist was called down to take a look at him.  He suggested we send him to the NICU, but David and I wanted to keep him with us.  They allowed us to continue to monitor.  Later that morning when the Pediatrician came to see him, Alexander was not any better, and maybe a little worse.  So the Dr. ordered him to the NICU for observation.  David went with Alexander up to his new room in the NICU.  The nurse hooked him up to the machines for monitoring his respiratory rate, heart rate, and O2 stats.  He was a struggling little boy.  They checked his blood sugar level and found it low, so he was moved from being “observed” to a patient in the NICU, since he now needed to be treated for low sugar levels.  This problem we had faced before because we have had big babies and they have been born with high blood sugar levels.  None have had to go to the NICU but we had been able to avoid that route by bottle feeding our newborns for the first 24 hours.  With Alexander it could have been high due to gestational diabetes like my other babies, but he wasn’t a big baby, so it could have been high because of the stress on his little body from the respiratory distress. 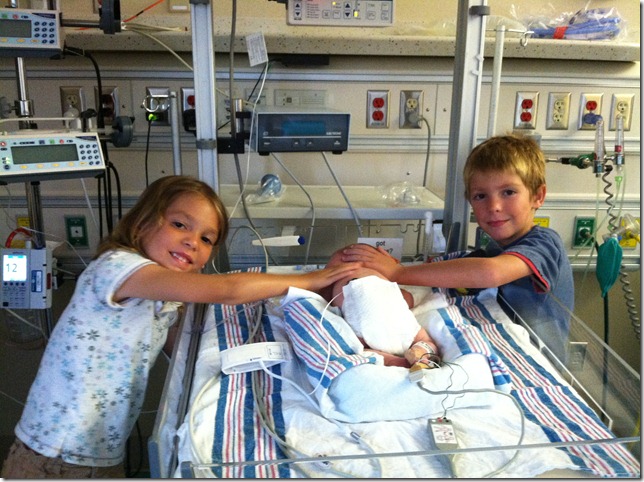 I was able to go up a few hours later to see my new little one.  And his excited brothers and sisters were also able to come in for a short visit that afternoon.  Alexander seemed to be on the mend and seemed to be breathing better after a visit, love, and prayers with his siblings. I was even able to hold him for a few minutes and we could tell he seemed more peaceful.  But later that evening, the breathing retractions returned and he worsened, he seemed in pain.  In the middle of the night we received a phone call from his nurse telling us that he had started crying and his little lung had a punctured hole and collapsed.  They were able to quickly remove the air outside the lung to keep it from crushing in.  We went up for a short visit and to pump milk to be stored for later use.  After a short visit we returned to my room to sleep and were not there long when we received another call from the nurse telling us his lung had collapsed 2 more times so they were going to insert a tube into the space outside his lung to continuously pull the air out so he could breathe easy and keep the pressure off his heart.  This would also help the hole heal more easily.  They use a water suction machine to do, which David found fascinating to learn about.  We referred to as the bubbler.  No more holding him while he was connected to the bubbler.  Sadly, contact with him became very limited. 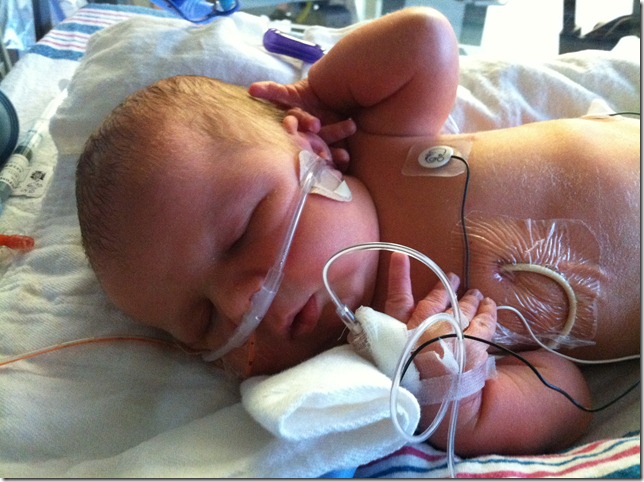 To keep him calm and undisturbed we couldn’t touch him often and if we did it was in pressure touches, no stroking his head or arms or back.  They wanted to keep him calm so he wouldn’t get upset again and puncture a new hole.  If he did get upset, they would give him a drop of sucrose, the sugar is calming to babies.  During this time he received an IV of fluids and antibiotics in case his distress and respiratory problems were possibly caused by an infection.  That night we had to check out of the hospital and leave him in the ICU, not knowing when he would be coming home.  It was one of the most difficult things we have had to do.  It was so hard to say goodbye, even though we knew he was in good hands, it just didn’t feel right to leave him behind.  We went home to sleep and called every 4 hours when I woke up to pump.  The nurses assured us he was doing well each time I called. 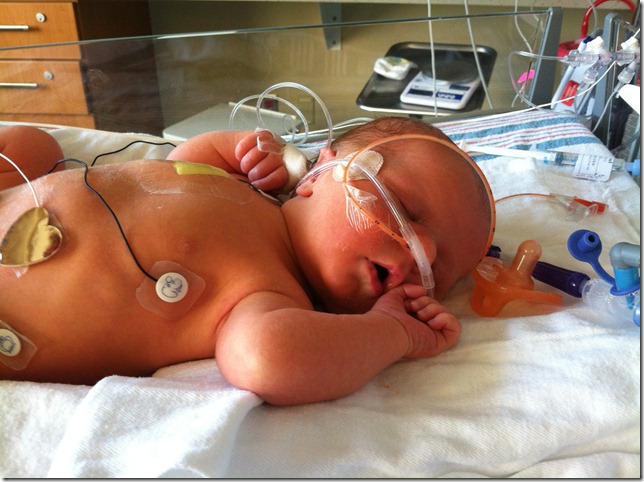 He is a strong boy, and when we arrived the next day the bubbler machine showed that there was no more air escaping his lungs, which meant the hold had healed.  We spent most of the day at the hospital, going home in the afternoon for a short nap, returning before dinner time.  Savannah came later that day to spend a few hours with us and baby Alexander.  She drew pictures of him and his room and machines.  The next morning they removed the bubbler tube from his chest.  His breathing was so much better, and the retractions were less.  We were able to see his xrays and could see his right lung was working properly now. 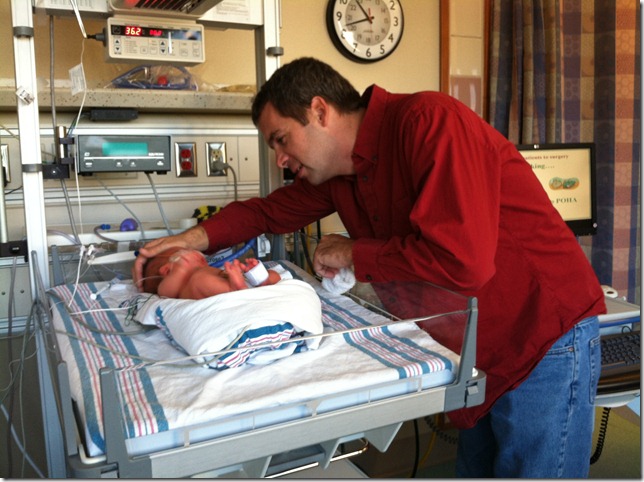 He was still on oxygen and his IV, but we could hold him briefly now.  And I was able to try to breastfeed him.  David always helped with checking his temperature, and vitals, and changing his diaper every 3 hours. 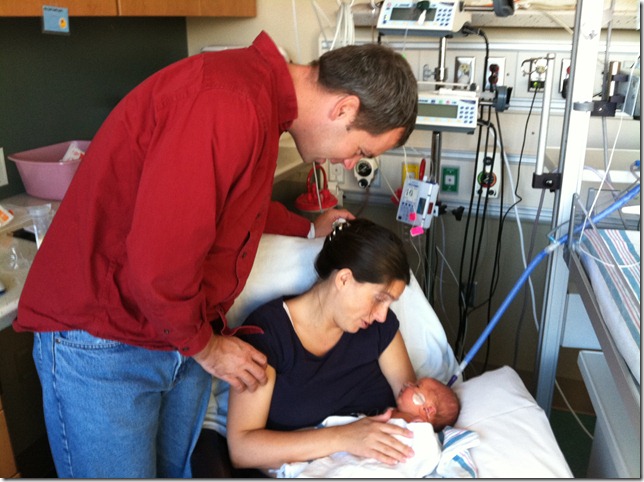 That night they weaned him off his oxygen and lowered his IV fluids so he could start to breast feed or bottle feed. He was able to graduate to a regular basinet.  Unfortunately that didn’t last. 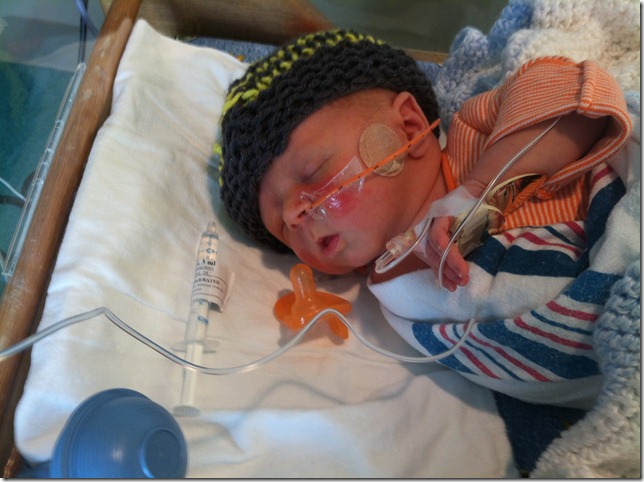 After one night in a regular bassinet, they had to move him to a bili bed.  His bilirubin count started to rise higher, so they moved him into a bili bed to fight that.  This was a small set back, and it again meant we couldn’t hold him other than every 3 hours to change his diaper and spend 20 minutes trying to breast or bottle feed him. 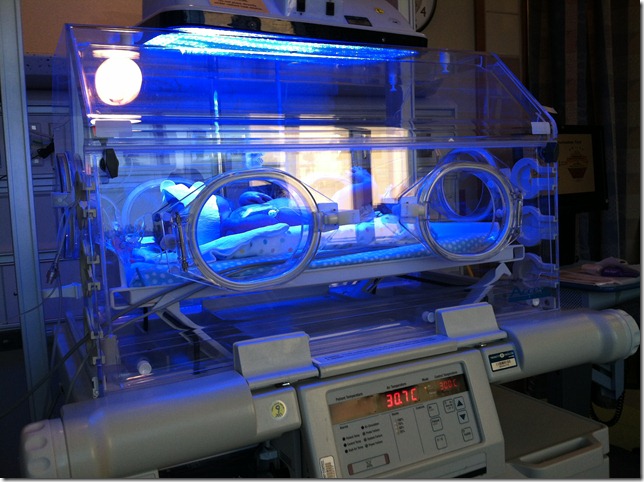 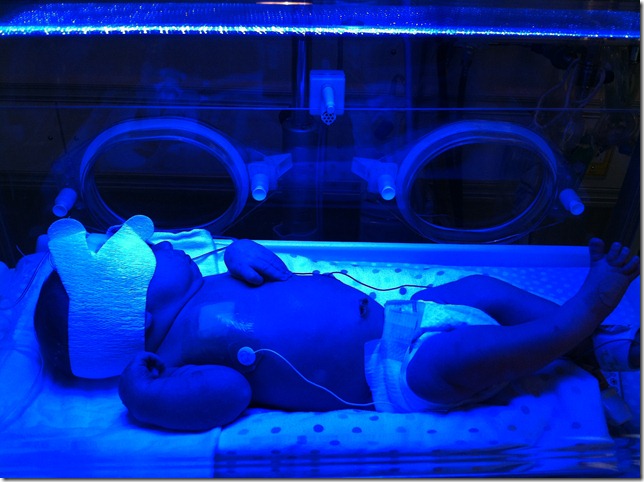 Our little smurf baby!  They cover up the eyes so the light doesn’t bother them. 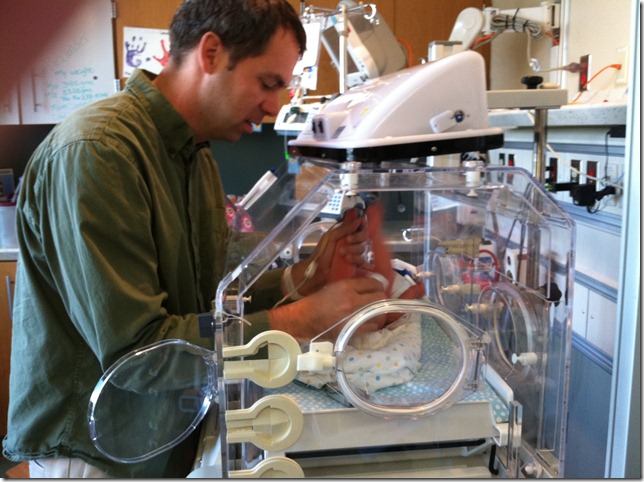 It’s an awkward way to change diapers, but they want to keep him in the billi bed as much as possible.  It was a short 20 minutes of feeding time, but so precious to hold him that long.

After 24 hours his billi levels had dropped enough and he was able to return to a regular basinet to continue his progress toward going home. 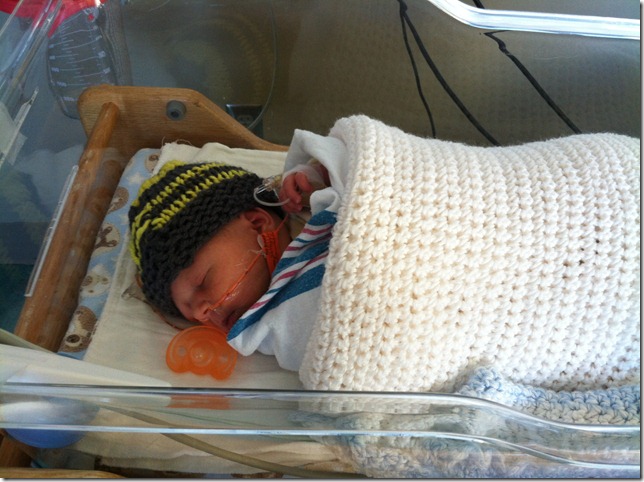 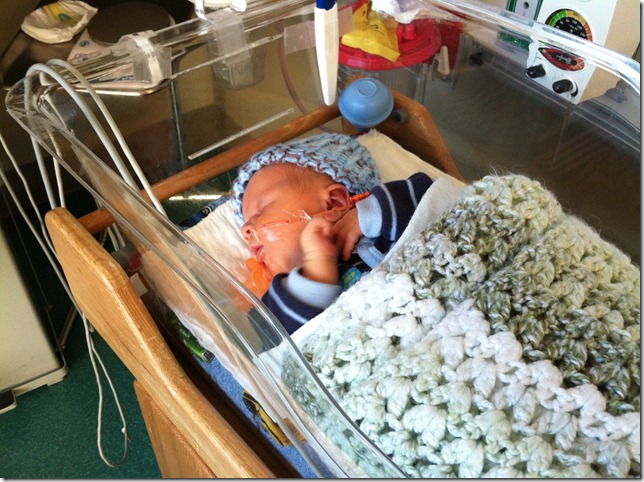 Eventually his IV was removed.  They still monitored his heart rate, respiratory rate, and O2 levels. 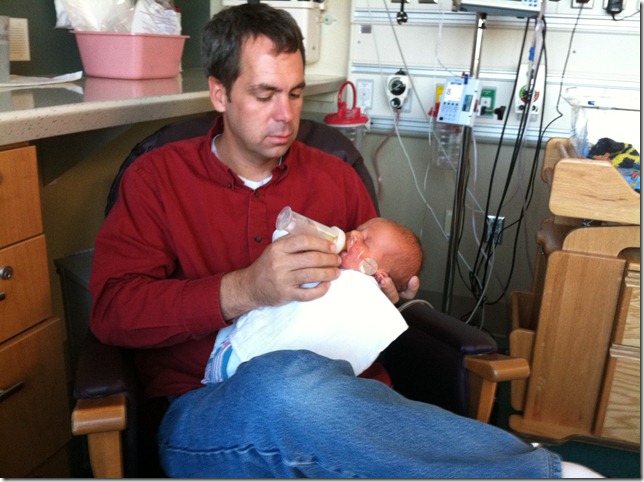 Once he was off his IV fluids, we continued trying to feed him normally, and then the nurse would guavache feed him, which is through a tube going thru his nose into his stomach. While this is better than IV fluids, it did start to interfere with a normal feeding. At first it was a good way to feed him because he needed to rest and heal, but as each day went by I became more and more frustrated with this feeding method because it made it so Alexander didn’t have to work at eating. It made it hard to get him to spend energy on either breastfeeding or bottlefeeding, because after trying to feed him a normal way, he always received the same amount by gauvache tube. So if he ate well and received a tube feeding he wouldn’t eat at his next 2 feedings because he wasn’t hungry.  We couldn’t take him home until he was solely breast or bottle feeding AND gaining weight.  We so desparately wanted to take him home and each day we couldn’t wasn’t very difficult.  Finally the Dr. agreed to stop the tube feeding and let him go 24 hours solely breastfeeding.  We were able to stay the night in a room in the NICU with him and “pretend” we are home with him.  If he gained weight in the morning then we could go home.

The night went well, and he indeed gained a few ounces and could be released.  As the DR came for one last check over, he heard a heart murmur that he had been hearing on and off during Alexander’s stay in the NICU.  He wanted to run one last test to make sure all was well.  So we waited for a tech to come and run an echo cardiogram.  That is a very cool machine.  Almost like a 3D ultrasound machine with all kinds of colors and sounds showing blood flow and direction.  We then waited for a cardiologist to read the test results and finally we received the news…  Alexander does have a small hole in his heart, but in an area of no concern, it should heal fine.  We just needed to follow up with a cardiologist in 6 weeks… AND YES WE COULD ALL GO HOME!  It was Father’s Day, and one I am sure we will always remember—the father’s day we could take Alexander home, after 10 long days in the NICU. 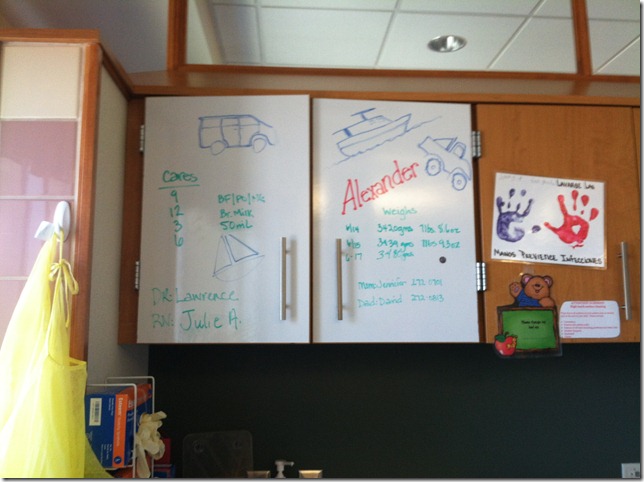 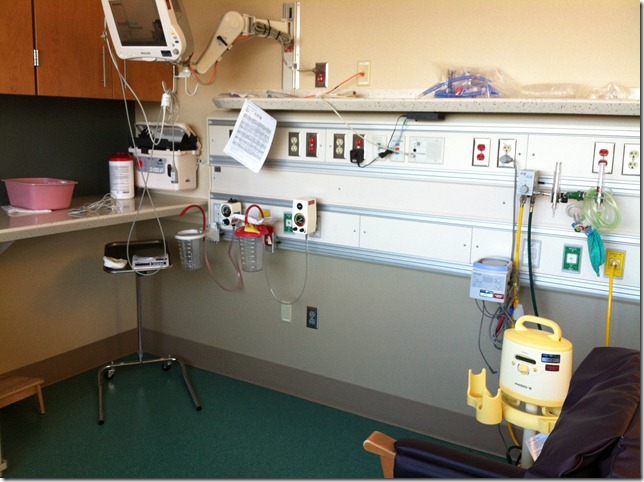 His NICU cubicle.  We are so grateful for the Nurses, Dr’s and Staff at St Alphonsus NICU.  They were so great and wonderful.  We appreciate their concern and care of our beautiful boy, and their patience in answering all our questions—there were a lot.  They were great!  They made the experience of leaving our baby behind easier.  We always knew when we were away that he was in good, capable hands.  Because of them, we have a healthy happy baby boy home with us today!

We are also grateful for all our family and friends, and their friends, who prayed for our little Alexander.  We could feel the love and strength from all those keeping us in their thoughts and prayers.  We know that God hears and answers prayers and we know that he was watching over our sweet boy and family during this trying time.