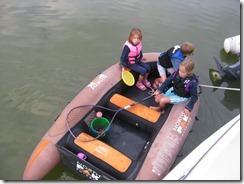 Maryland is known for their blue crabs.  Although I grew up here, my parents were not from here and never learned how to eat or cook crabs.  So my only exposure to them was from friends homes.  I had never cooked them before and had only eaten them a handful of times, many years ago. 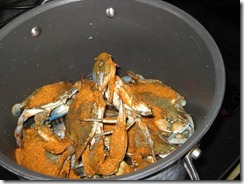 The kids have been trying to catch crabs for awhile and were excited when I said this weekend we would cook and eat what they catch.  We brought o 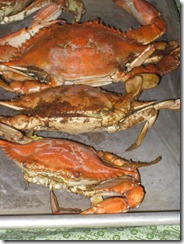 ur little inflatable boat from Idaho for them to use and play in and they had fun sitting in it trying to catch crabs.

We spent the weekend out exploring more of the bay with some friends on board.  Peggy and Ken Townsend, 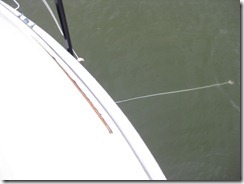 good friends of my parents, whose kids I grew up with, joined us for our weekend near St. Michael’s and Oxford.  They suggested chicken necks for catching crabs.  So we picked some up in St. Michaels, MD.  We tied the necks ont 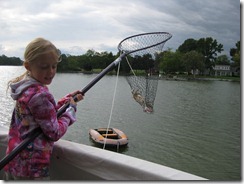 o a couple of strings and hung them off the back of the boat so they reached the bottom of the river.  Every few minutes the kids would run to the back, pull up the string while one of the other kids would watch the water to see if a crab was hanging on to the 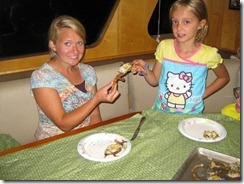 chicken neck.  If so, then they would grab the net and scoop up the crab.  They would then check the size, they must be at least 5 1/4 inches across to keep them.  At the end of the day they had 6 crabs to cook and eat.  I didn’t have a steaming rack to cook them on in a pot, so with the help of Ken we built a rack out of knives and forks in 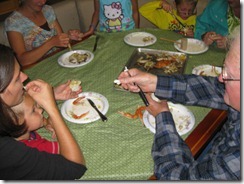 the bottom of my pot. In went the live crabs. With the Townsend’s direction we added water, vinegar and lots of old bay seasoning; put the lid on and let them steam for about 20 mins.  The pretty blue color disappeared and the crabs turned red.  We pulled them out of the pot and set them 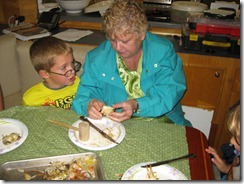 on a baking sheet to cool for a few minutes.  The Townsend’s then showed us how to open, clean and pick the crabs.  The kids had a lot of fun learning this new skill and trying crab meat.