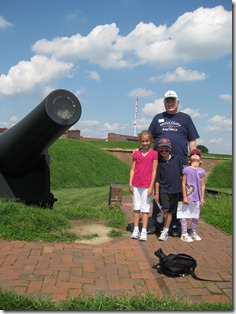 Outside of the Baltimore Harbor is Fort McHenry.  It was used in many wars, but it’s mostly known in the war of 1812 against the British.  During the battle at Fort McHenry, Francis Scott Key was on a ship out in the harbor and could not reach Baltimore because of the British ships.  As he watched the battle of the British ships and the Americans at Fort McHenry fight all night he awaited the morning light to see which flag would fly over the fort.  And if you have heard the Star Spangled Banner, then you know which flag it was.  He wrote the poem of The Star Spangled Banner the morning after the battle, shortly after seeing the flag hanging in the dawns light. It wasn’t long until the poem was put to music and gained popularity.  However it wasn’t until 1931 that it officially became our National Anthem.

While Grandpa was visiting us here in Maryland, he took us for a field trip to view the Fort in Baltimore and learn the history behind the American Flag and the Star Spangled Banner.  The kids were able to earn Junior Ranger Badges with the National Park Service as they gathered info at the fort. Unfortunately it wasn’t a windy day so the flag wasn’t blowing for us.