For extended spring break this year we decided to take just Savannah and Calvin on a trip to Israel.  To sweeten the deal we worked in Jordan, and a 24 hour layover in London.

Even though we were exhausted after a red eye flight, we spent a full day touring the sites of London.  We ended the day with delicious fish and chips at a pub near paddington station.  We then caught the train out to near the airport where we would take a morning flight to Tel Aviv. 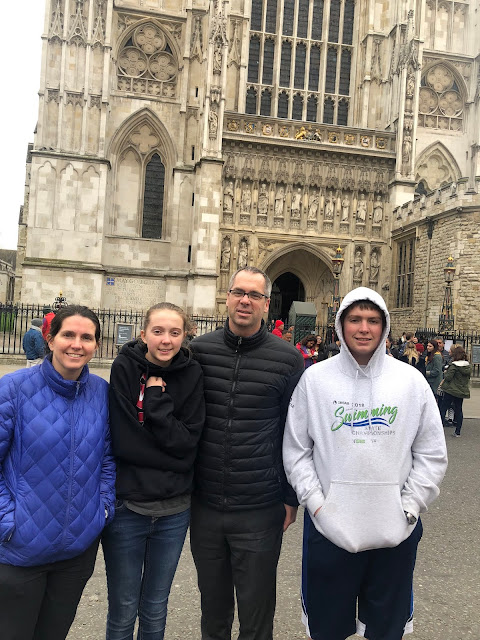 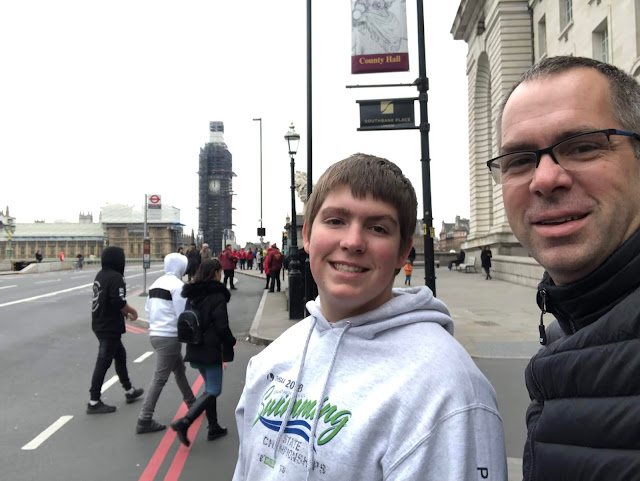 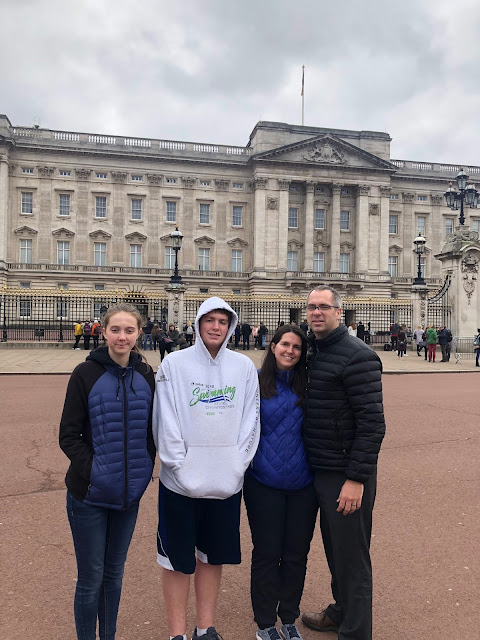 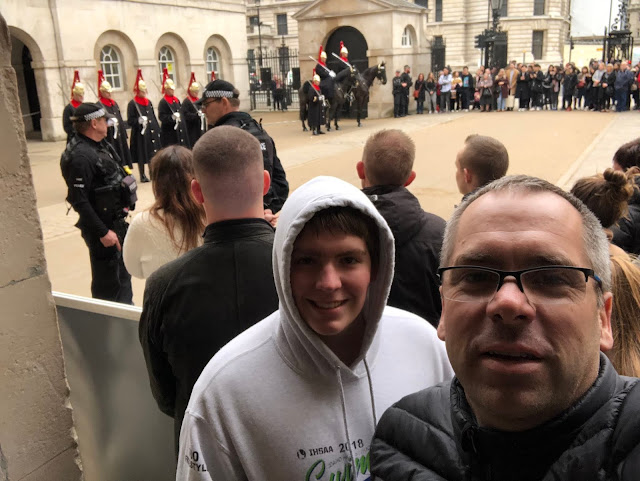 After arriving in Israel we picked up a rental car and drove to Nazareth where David, led by GPS drove through some super narrow streets of old town, until we decided that we should figure out how to turn around and drive to some wider streets.  Driving in Israel is definitely more aggressive than the typical US city, but it's doable, for David.  We stopped in Nazareth, the home town of Jesus, for dinner.  It's not a quiet little town as it was in Jesus's day, but a bustling small city.

After dinner we continued our evening drive to Livnim, to our airbnb.  In the morning we were greeted with a narrow view of the Sea of Galilee from the property.  We took off for a day of touring the Galilee area.  First to Capernuam to view the ruins of the town.  Capernuam was near the trade route so it was a bigger town than Nazareth at the time.  Now it is nothing but ruins on the shore of the lake. 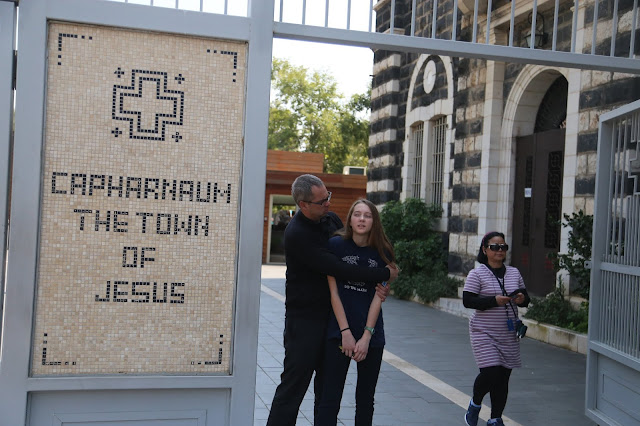 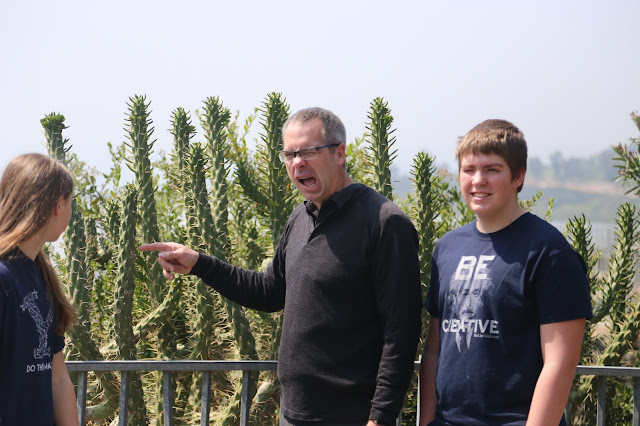 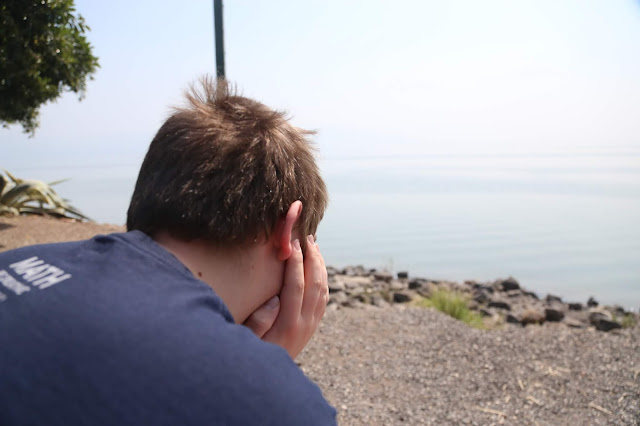 Next we drove up the Mount of Beattitudes where it is believed to be the location of the sermon on the mount. After walking around the area, we then drove to Tiberias to walk along the shore and look for some lunch.  Along the board walk, it was packed with people and music blaring.  We're not sure if it was a special festival of sorts or just a typical weekend day.   But there were people and families everywhere.   We found a great Falafel place and picked up some treats and pastries for later and breakfast the next day.

With lots of daylight left we decided to drive all the way around the Sea of Galilee, also called Lake Kinneret.  It's not a very big lake but it was a scenic drive.  We stopped at a few beaches and watched many Israeli families out enjoying their day off.  It was Friday, this evening would be the start of the Sabbath here in Israel. 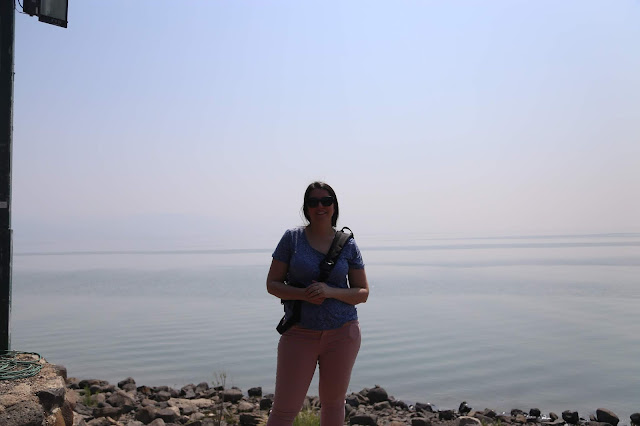 On our way back to Livnim we stopped along the road where we noticed several cars.  There was a pretty canyon through the hills to hike along a stream.  We followed it for a bit, crossing the stream a few times and enjoying the beauty around us.  It was really a beautiful way to end the day. 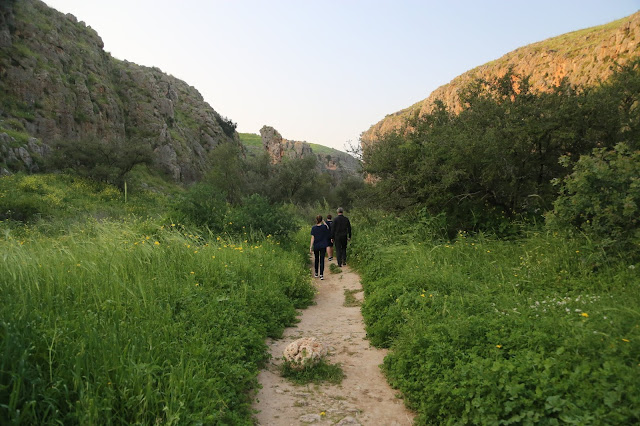 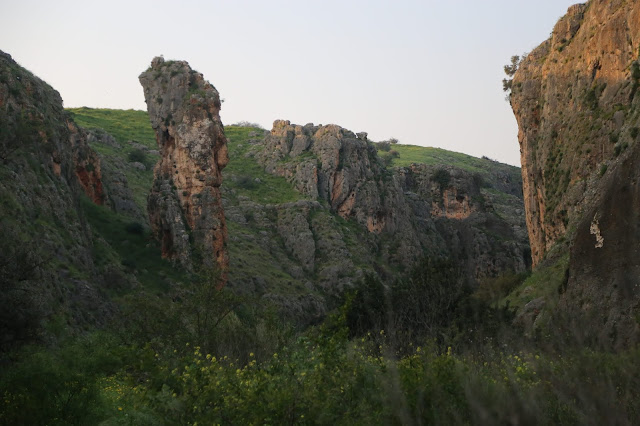 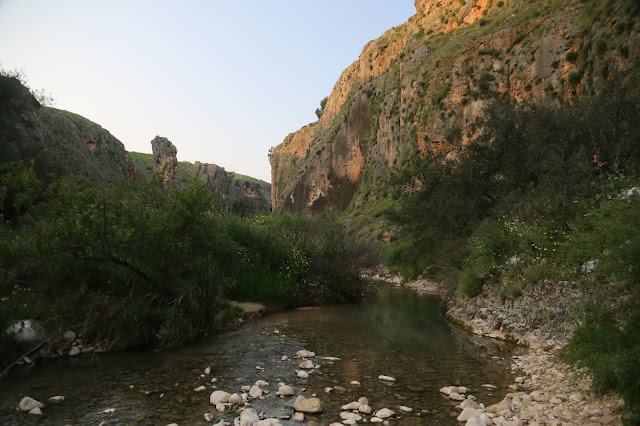 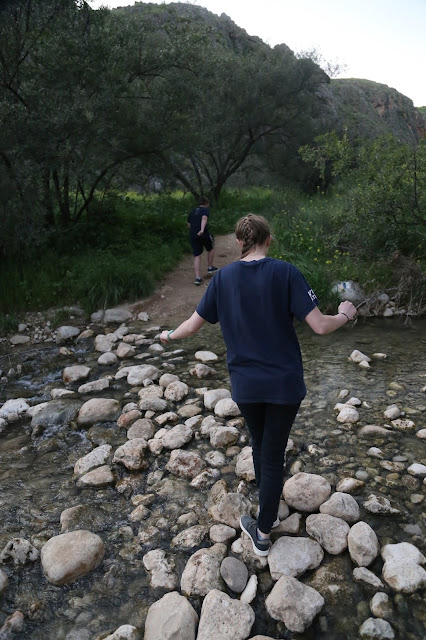 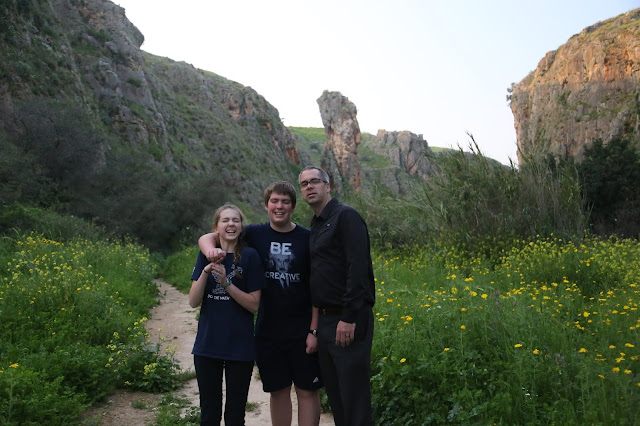 We arrived back to our place to check on our laundry that the lady that owned the house we stayed in was kind enough to do for us.  We found all our clothes hanging to dry off our back deck.  This was really a wonderful treat as we were able to enjoy our day and not worry about this chore.

We then drove 15 minutes back into the small town of Magdala, where Mary Magdalene is thought to be from.  Here there is a grocery market and a couple of restaurants.  We ordered an Israeli style pizza from Pizza Hut, which was not a huge hit with us, but we still ate it.  At the store we picked up a few snacks for the road.  Tomorrow we would do lots of driving.

On Saturday we rose early for a drive to Jerusalem to make it in time for worship services at the BYU Jerusalem Center.  It was a two hour drive early on the Sabbath from the Galilee to Jerusalem.  We left with plenty of time to make a short detour if we found one.  And we did.  We pulled off the main road to stop in the town of Bet She'An-Beit She'An.  They have excavated some Roman ruins from the time of Roman occupation.  It was interesting to see. 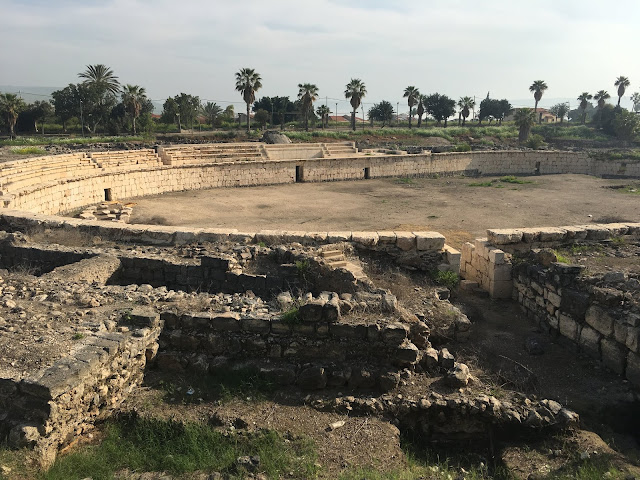 We then continued our drive through the lush green hills into the dessert as we neared Jerusalem.   Unfortunately google is not correct on the location of the Jerusalem Center and after driving in circles twice around Mount Scopus,  we stopped to ask a police car nearby.  They escorted us to the Jerusalem Center, which we found located on Google Maps, but as you click for directions it takes you to a different spot on the map- frustrating, but we were blessed to have help and we still arrived 10 minutes early.  However, everyone else arrived earlier than us and we were lucky to get 4 seats in the very back.  The students weren't even in residence that Sunday and the place was full.  After the Sunday School lesson we enjoyed the view from the terraces of the center for a bit before our 6 hour drive. 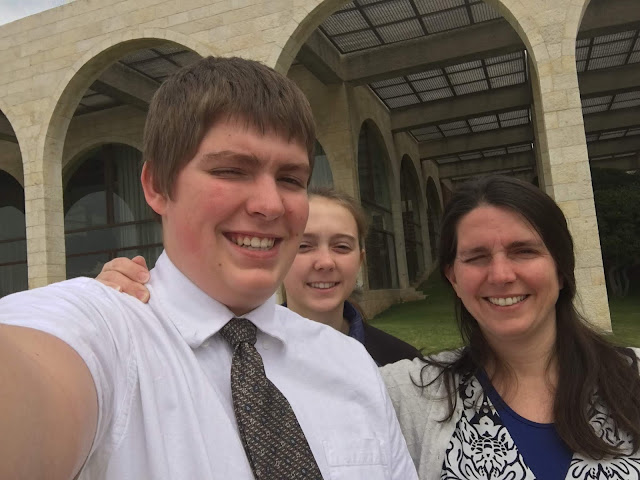 After driving for 45 minutes, the Dead Sea was within view.  While so much of Israel looks much like southern Utah, there seems to be a perpetual fog over the Dead Sea which ruins the view a bit.  A couple hours later we stopped at Ein Bokek and walked on the beach along the Dead Sea.  I was the only one that removed my shoes and stuck my feet in the water.  It was interesting watching the different people at the beach, many dressed differently than the beaches we are used to going to.  There were lots of bathing suits, but many more modest or dress styles, even on men.  Since it was still the Sabbath and we were still in Israel, it was hard to find a place open for lunch, so we opted for McDonalds, which was extremely busy at 3o'clock in the afternoon. 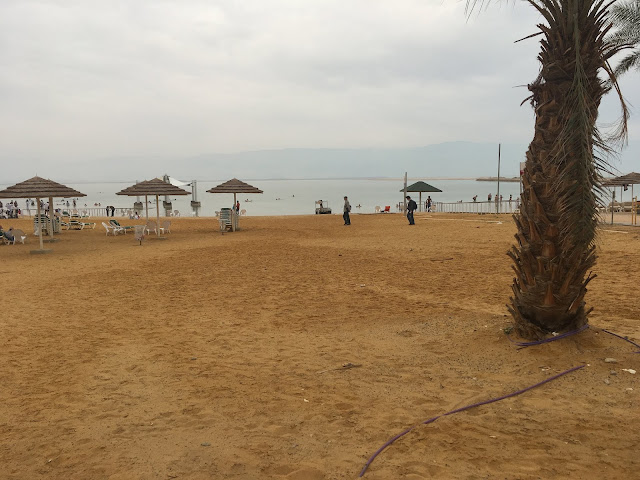 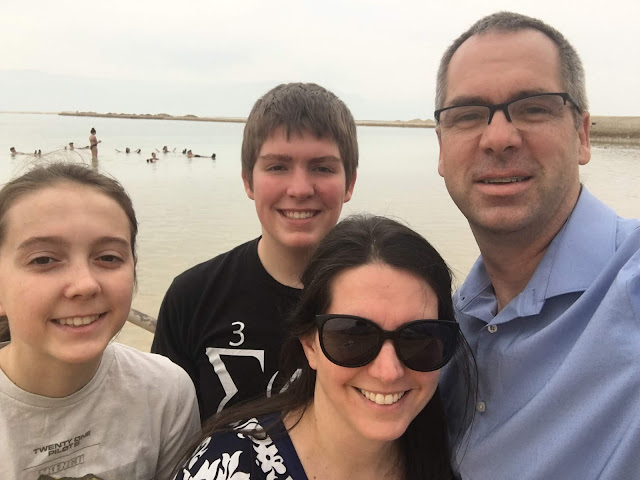 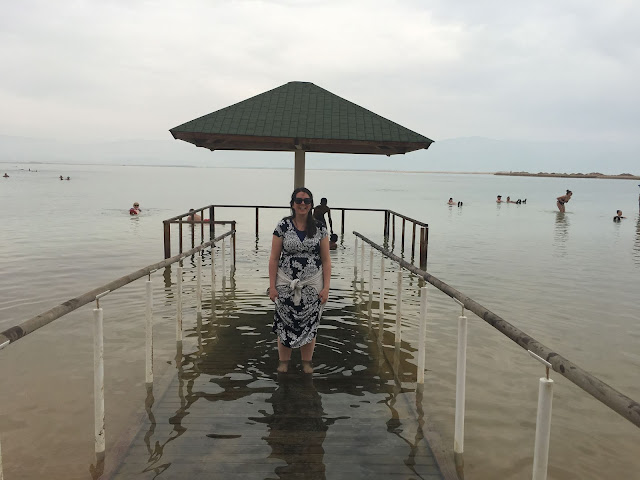 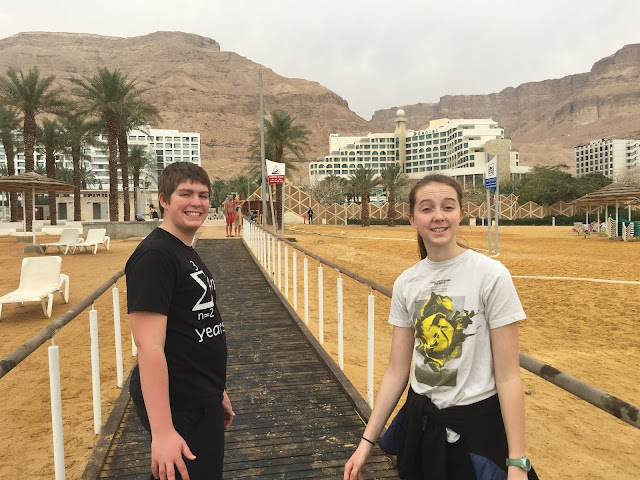 We hit the road again, we still had a couple hours left to reach Elat and the Jordan border.   Once we arrived in Elat we found the car rental location- closed for Shabbat, but Eldan Car Rental has a key drop at this location, so we were able to leave the car parked out front, drop the key, and take a taxi to the border.  Here we cleared out of Israel, paying the exit fee, and then walked across the border.  Lots of open land along the Dead Sea- which also divides the two countries, but here at the border crossing are actual walls. 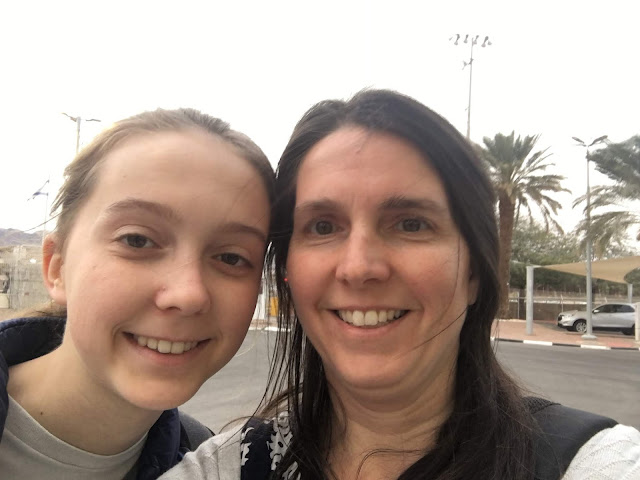 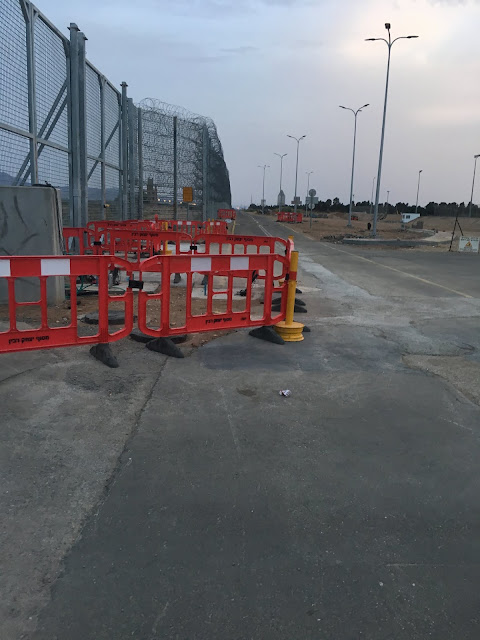 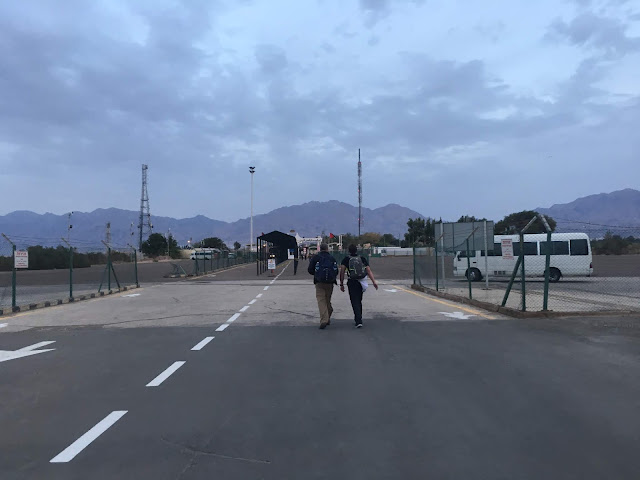 It took less than 5 minutes to reach the Jordan side, we then had to fill out a little paper work to obtain our visas there.  Since we entered in their tourist zone of Aqaba and we were staying 4 days, there was no visa fee for us.  From here we walked to the parking lot and picked up a taxi to take us to downtown Aqaba and the Avis Car Rental.  The taxi driver told us to be careful driving at night- don't hit a camel.  A Camel! On the road?  Sure enough there are camels, and sometimes near the road, but we had no issues and never saw them on the road.  The taxi driver may have been exaggerating, i don't know, but he also offered to drive us wherever we wanted to go during our stay instead of a rental car.  We stuck with the rental car, it gave us some freedom to do what we wanted or take back roads.

After picking up our car, we hit the road again.  It was dark, so we didn't get to see any scenery, but an hour and a half later we arrived in a bedouin village near Petra.  It was a loud Saturday evening in the village.  Many were out and about in their Bedouin clothing, even the donkeys were out.  We were definitely in a different country here.  We found our Bed and Breakfast and dropped our stuff off in our room.  Then headed to the main house for dinner.  Pita, hummus, chicken and rice, and salads. It was delicious.  We visited with a few of the other guest for a bit and discussed with the owner the route our guide would take us hiking through Petra tomorrow.