After Church we headed to our campsite, just outside the northwest entrance of Yosemite National Park, Dimond O.  We had a reservation for 1  night, and I was hoping we could snag an open first come, first serve spot for the next night.  The camp hosts were friendly enough and let us know which spots were those sites, and who they thought was leaving the next day, but we still needed to wait till the next morning to know for sure.  So we dropped the trailer at our reserved site, and put off setting it up till later, and headed into Yosemite to enjoy the few hours left of sunlight. 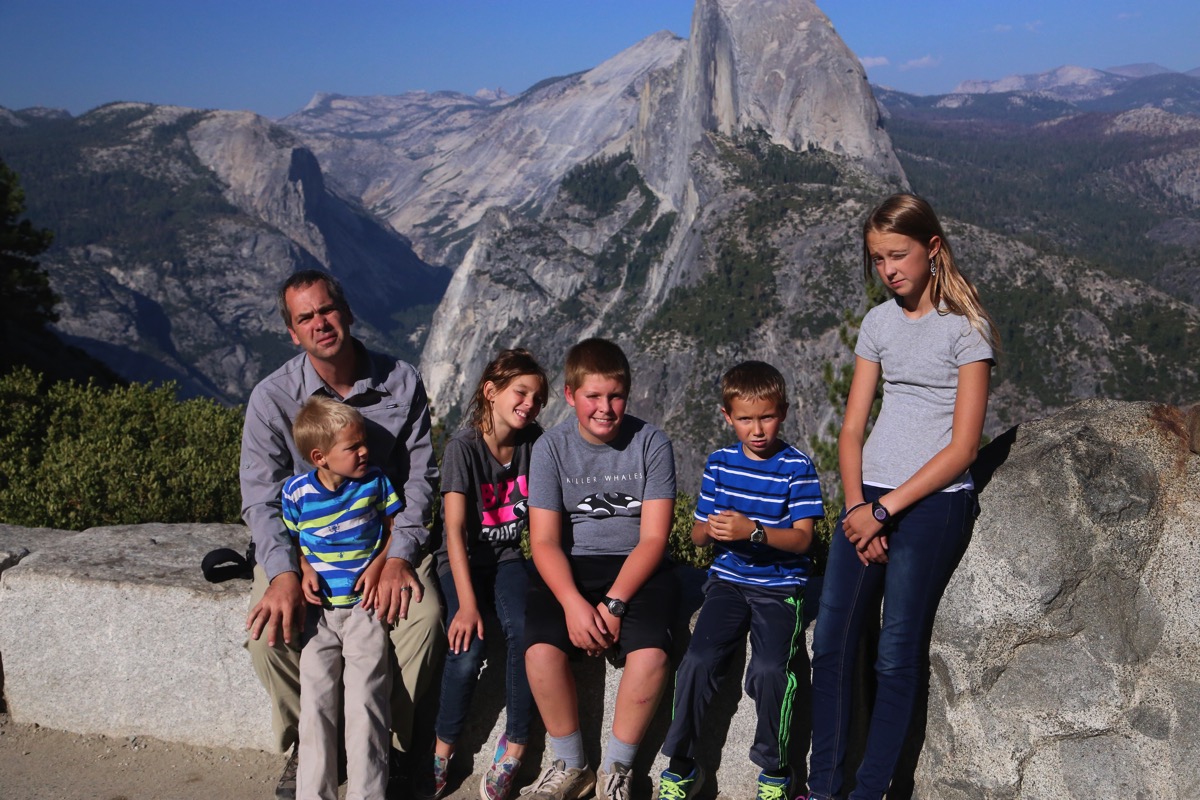 It was about 4pm and we had a late lunch, and decided to drive the road up to Glacier Point.  It was a beautiful drive and the view points at the top were outstanding.  In fact on one edge you can look down 3000 feet to the valley floor, and realize you are on a cliff!  Matthew occasionally gets scared of heights, thinking he’s up so high, and so we took him to this edge and held him as he looked over the railing and could see just how high he was up right now!  Even with his occasional fears, this kid still loves to climb counter, chair stacks, and rocks. 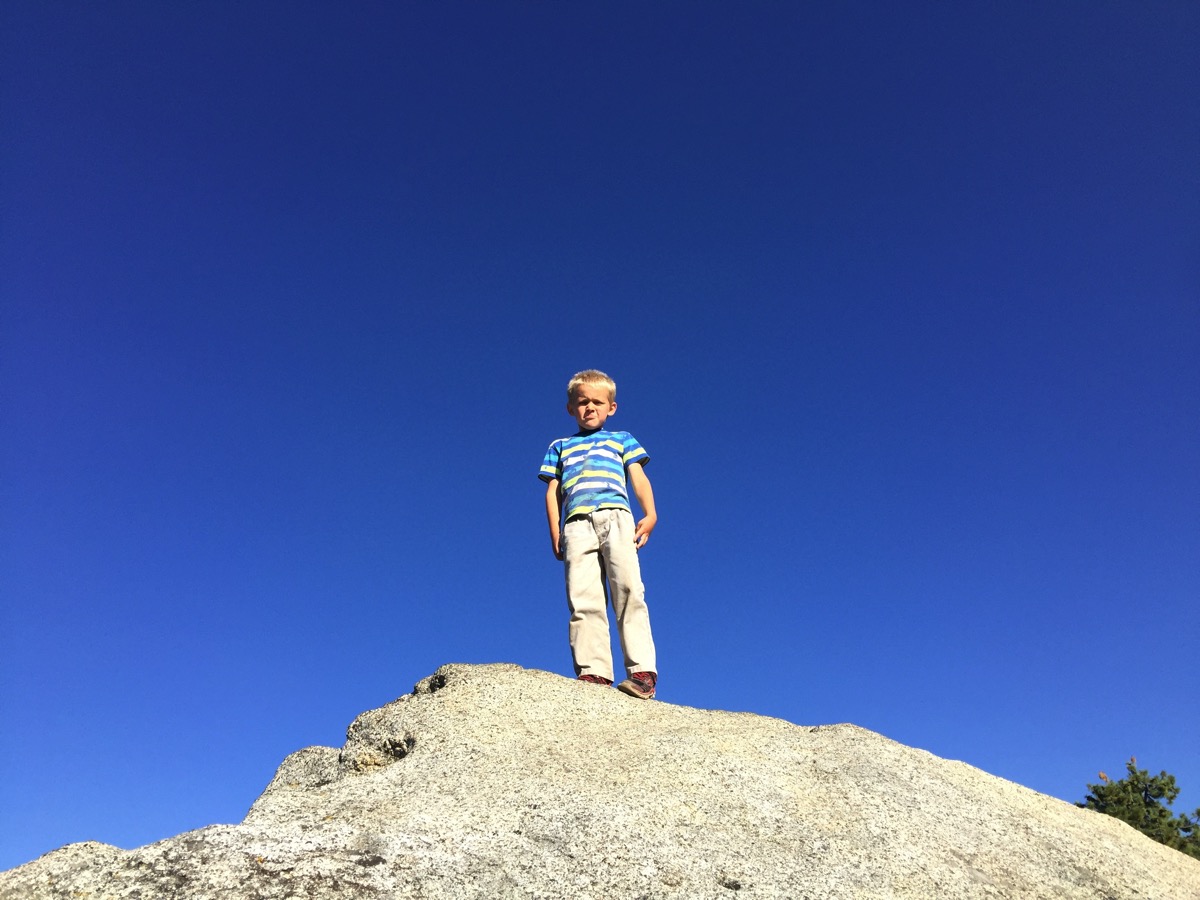 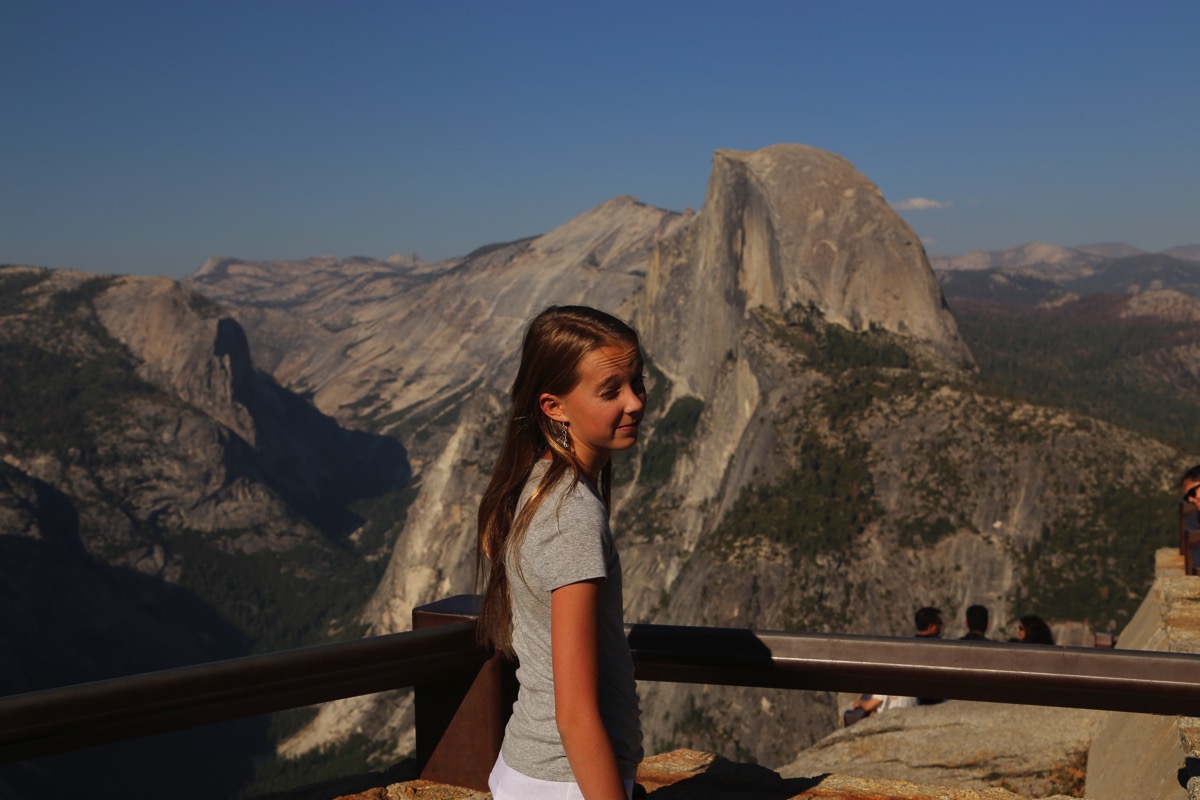 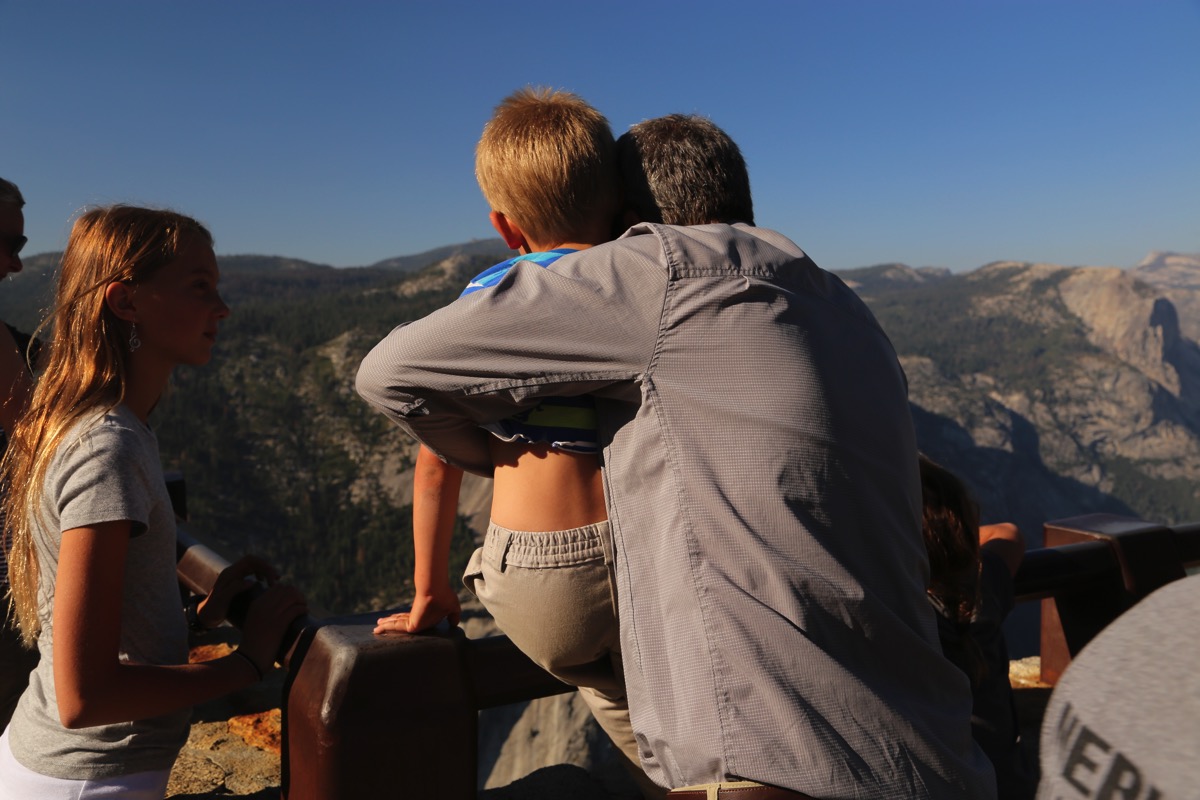 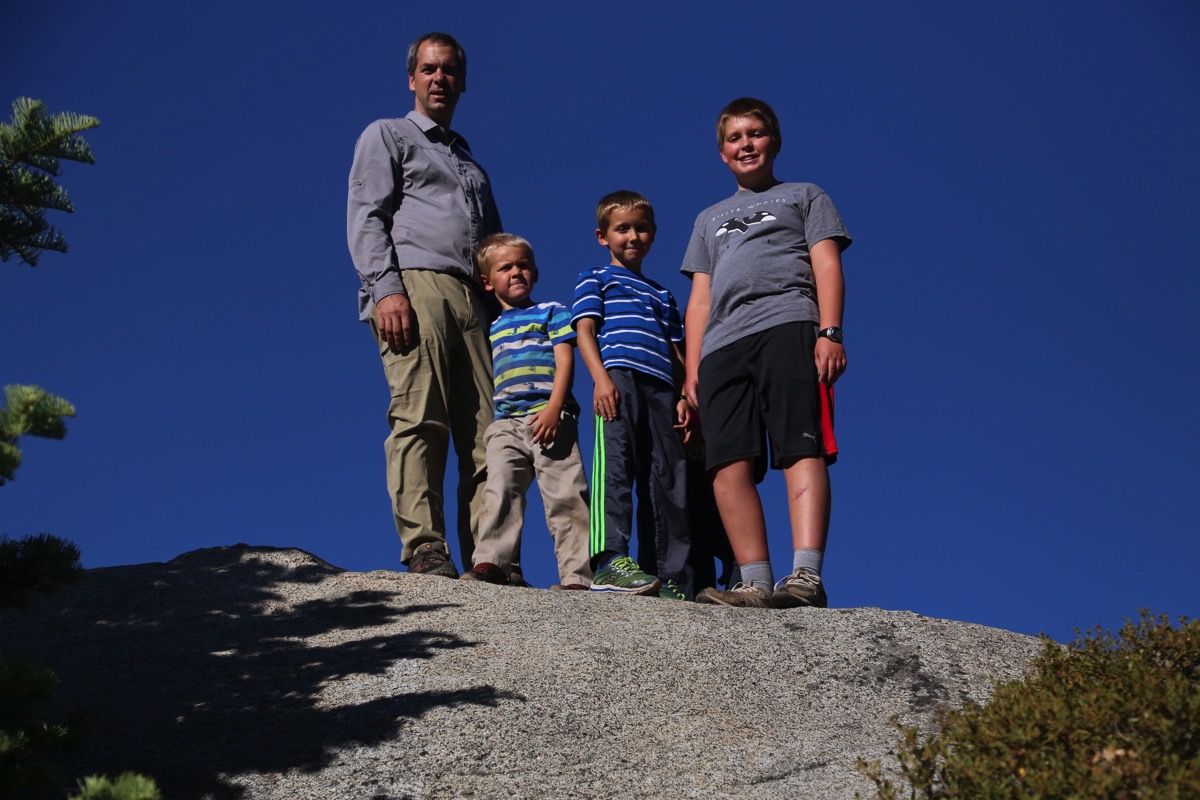 After doing the short hike to the view point, we stopped at Bridal Veil Falls on the way back.  They have serious concerns in Yosemite about injuries occurring from climbing on rocks near the waterfalls.  The rocks were definitely slippery when wet, and then they were concerned about people playing the rivers upstream from falls and then getting swept into the river and over the falls.  After the short hike to the falls, the kids were ready to enjoy the 1.5 hour drive back to the campsite for dinner.  Along this trip we have been listening to our family favorite audio book— Tennis Shoes among the Nephites.  There are about 12 books in the series, and each book last 4-6 hours.  In addition we have been listening to Hank Smith motivational talks.  He has a great sense of humor and ties it into his gospel talks.  We have truly loved our driving time spent listening to both of these things.  By the end of our trip we will have listened to 2 Tennis Shoes books, and 9 Hank Smith talks. 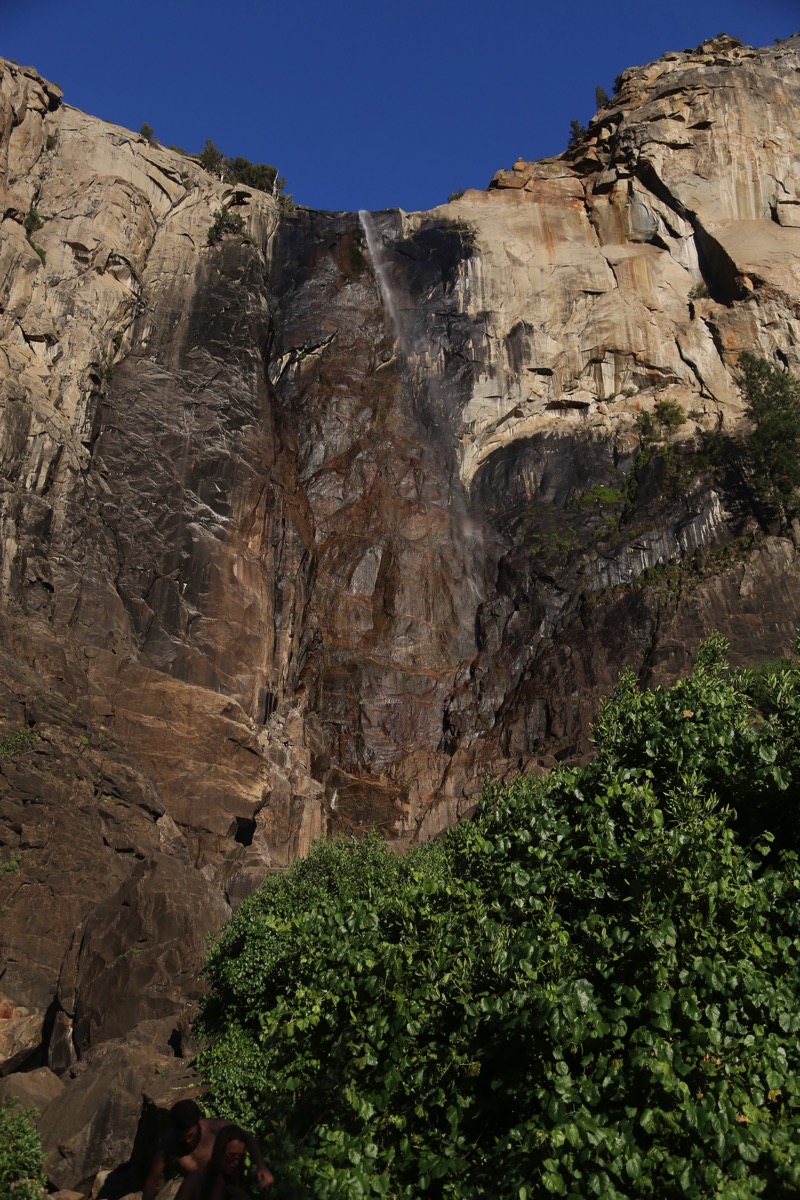 That night we kept our campsite simple, hoping to move sites in the morning.  The kids set up while I made dinner.  And in the morning after breakfast, we packed up and hoped for an open campsite.  We had to wait about an hour while the other sites cleared out, but we snagged an open site.  We dropped our trailer and stuff and headed back into the park by 10am.  We took the bikes with us and headed into the Valley.  Last night the traffic was pretty light, but this morning there were definitely a lot of cars, and it took a few minutes to find an open parking space. 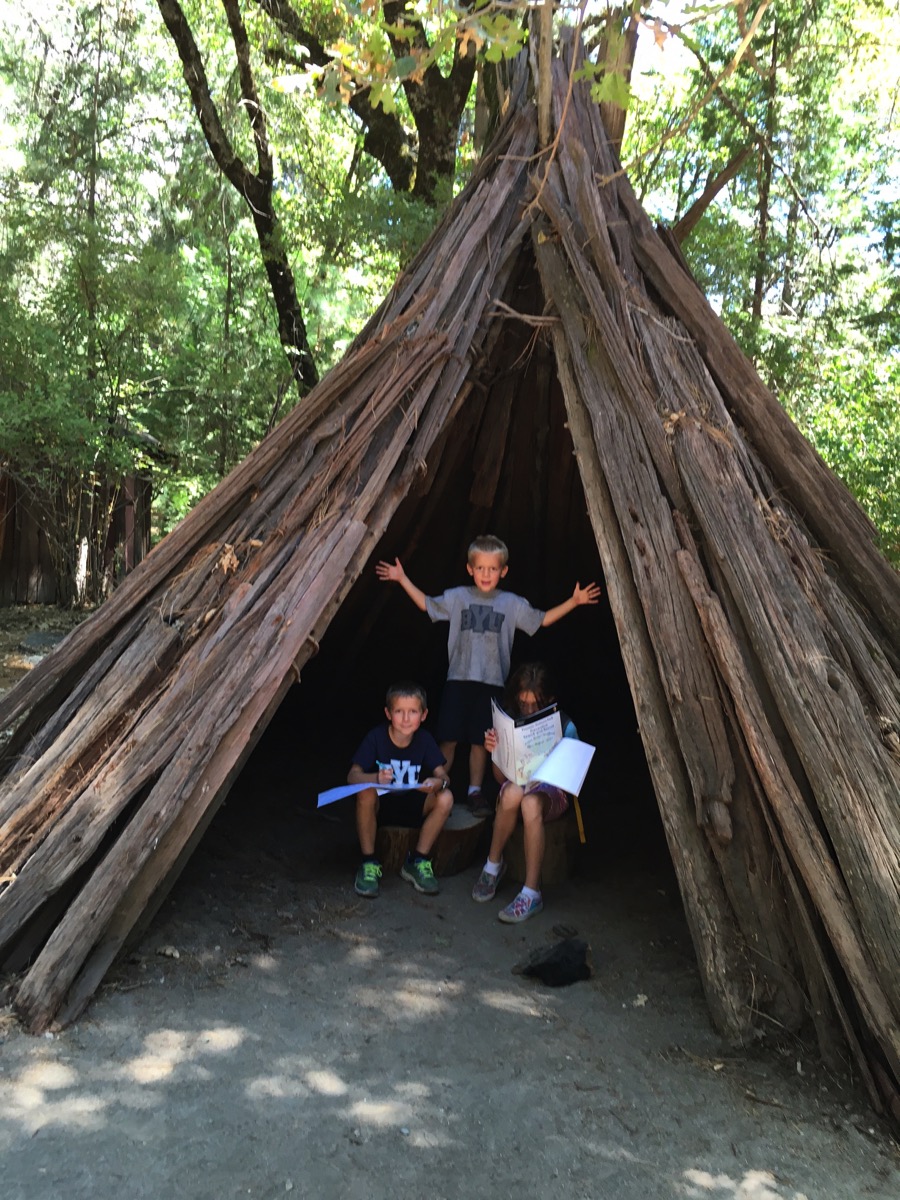 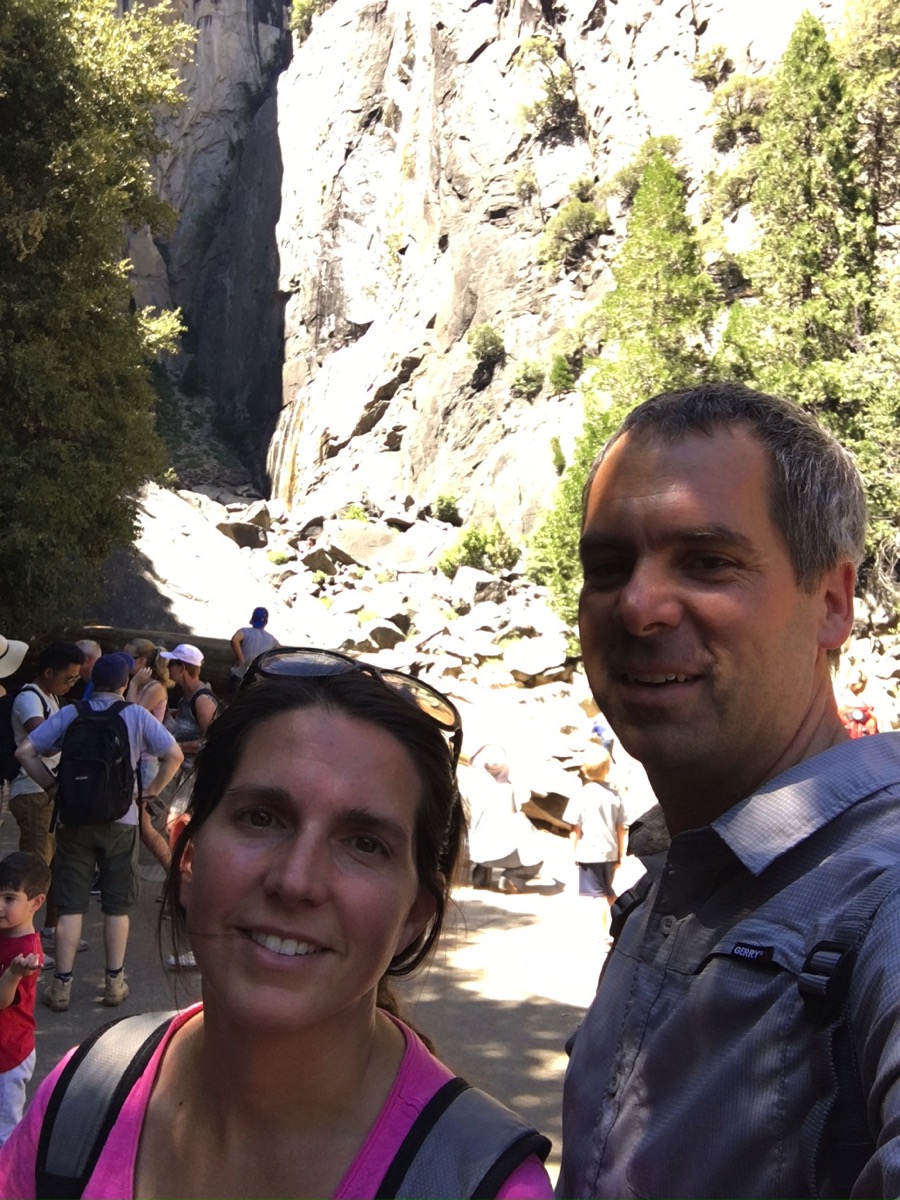 We set off on our bikes for a tour of the valley floor.  We headed to the visitors center first to pick up Junior Ranger Packets and watch the film about the park, and view the interpretive exhibits.  Then we came up with a route to travel.  We hit all the major highlights.  Yosemite falls, which was barely a trickle at this time of year, was a short nature hike to the lower falls.  We biked thru meadows with a hint of purple flowers left, but a beautiful ride with the granite peaks across them. We biked on bridges over rivers.  We headed over to Curry Village and shared some ice cream, and decided to come back later for pizza, which smelled so good!  From there we rounded out our loop by biking up to Mirror Lake, which was just a mere pond this time of year.  But it has a great view of half dome.  It was a nice ride from here through the trees back to the valley visitor center where the kids were ready to turn in the packets and get sworn in, again, as junior rangers. 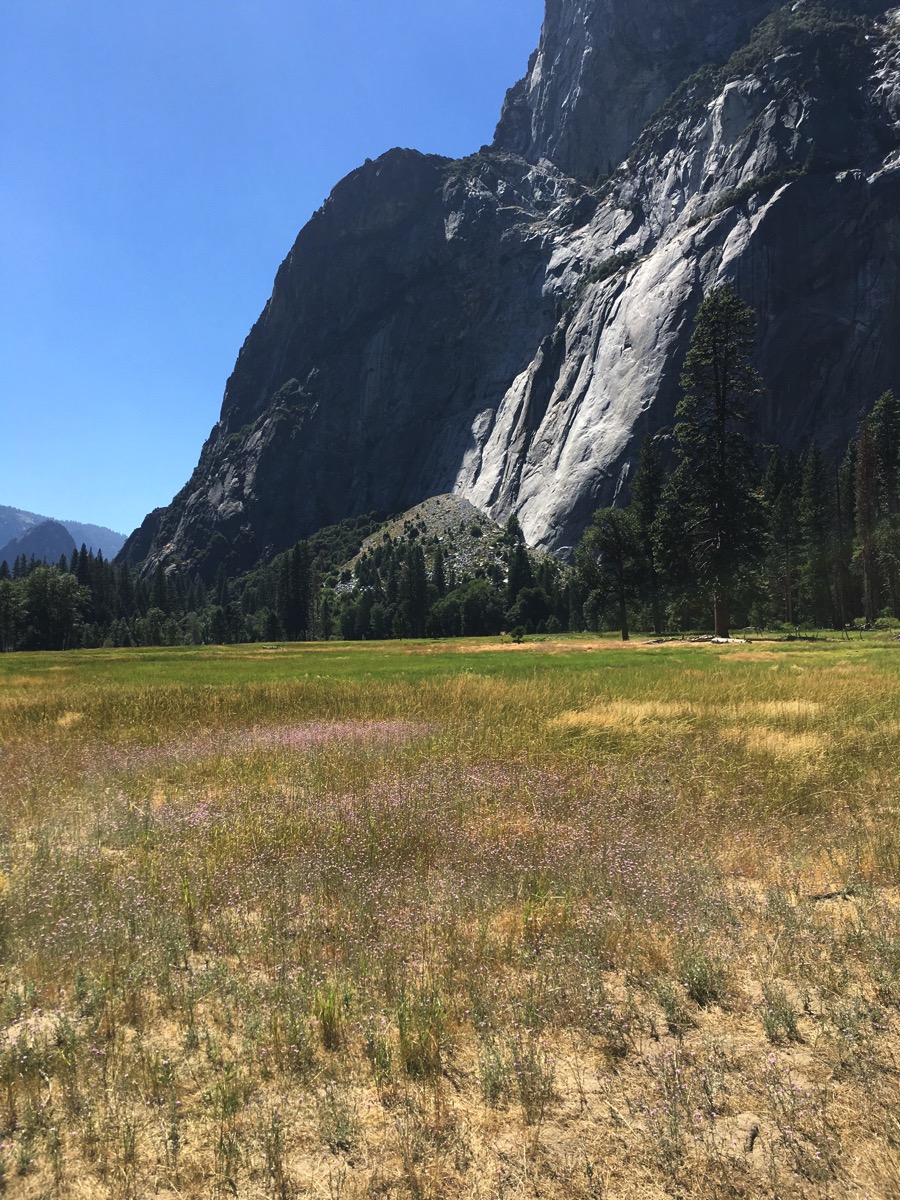 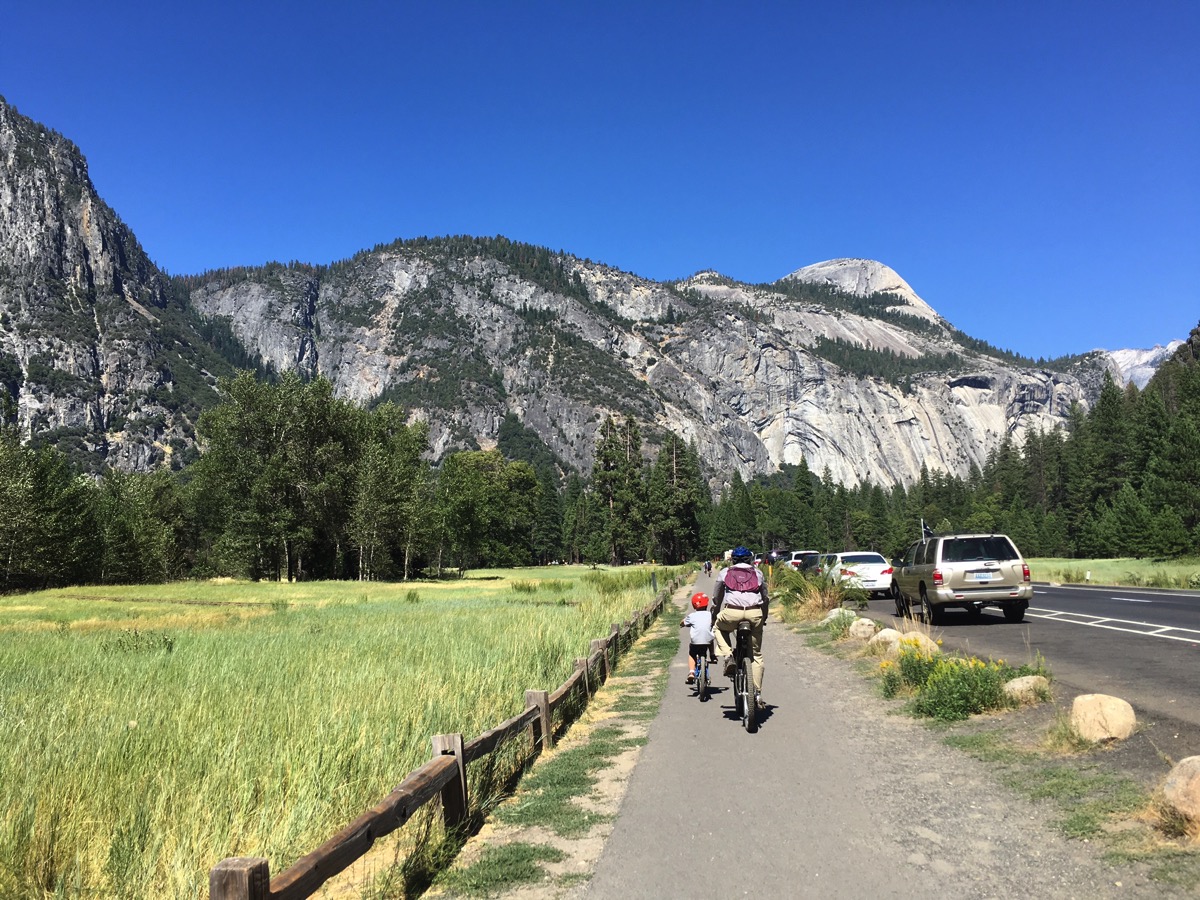 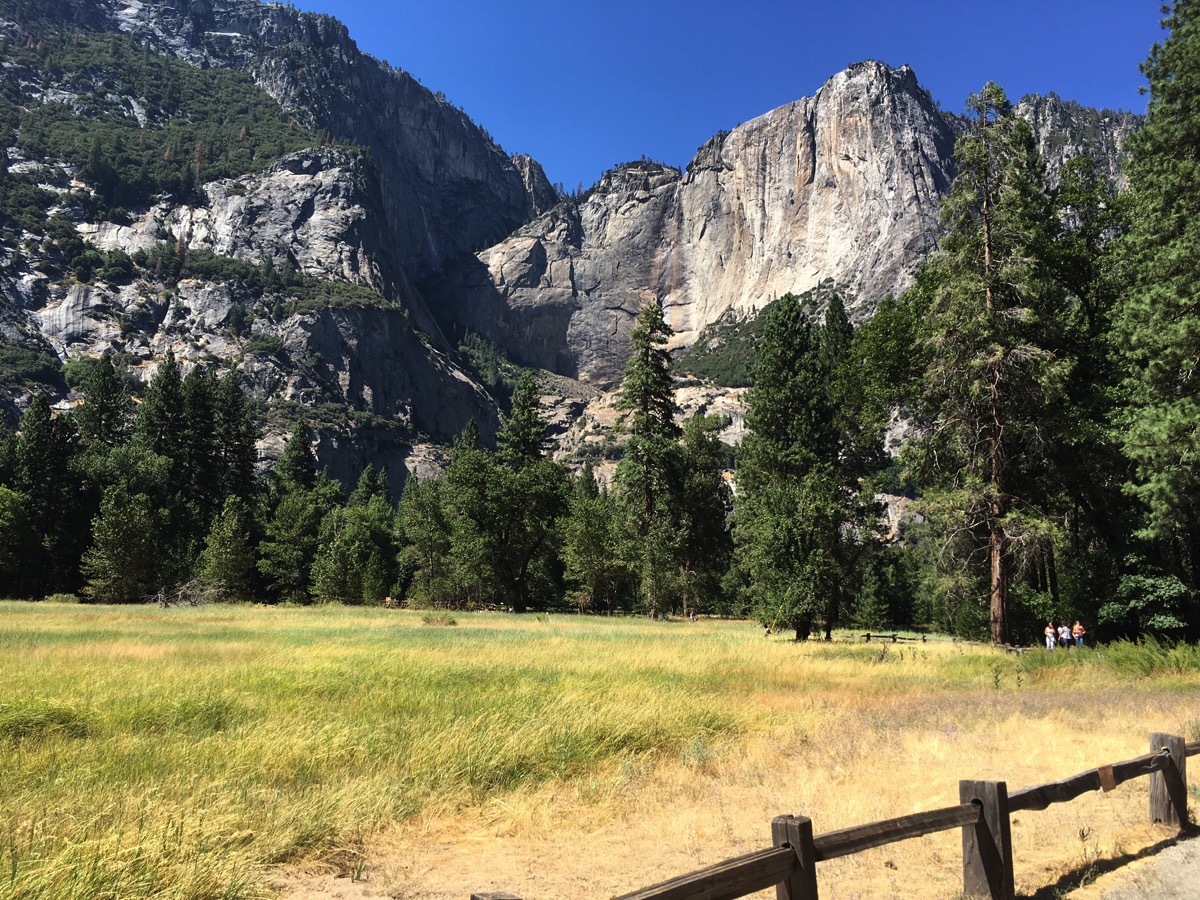 It was nearing 5pm, and the stream of cars heading out of the park was enormous and slow.  This was the perfect time to head back over to curry village for pizza and give the roads time to clear out.  And it worked.  We ate yummy pizza, and our drive home was a breeze, no stop and go traffic for us.  Bike was a great way to travel around the valley as well.  No waiting in line for the shuttles and move at our own pace.  We biked about 15 miles traveling the Yosemite Valley.   The drive in and out of the valley, as you climb through the mountains is quite beautiful.  You can see damage from fires and re growth and it is quite scenic. 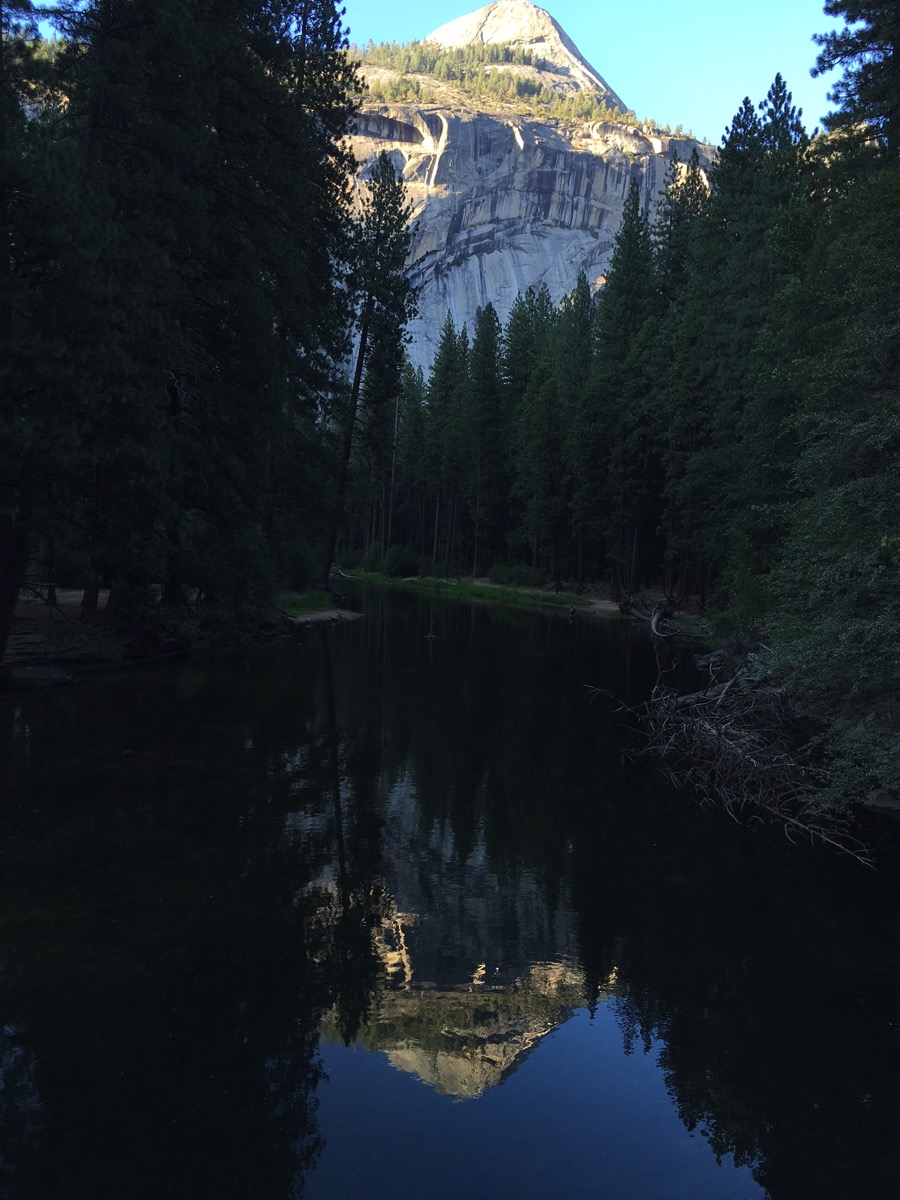 Tomorrow we were heading home, so again we kept our campsite simple for the night.  In fact we packed up the bikes on top of the trailer before we set it up for the night.  That made it much easier to pack up in the morning.  We headed out fairly early.  We were taking the north road thru Tuolumne Meadows out of the park, and it is one of the most scenic drives in the US, and gets busier the later it gets.  We also wanted to hike into the Tuolumne Grove to see the giant sequoia trees, and were advised to arrive at that parking lot before 9am to get a parking spot with the trailer.  We were the 3rd car there, perfect!  It was a mile hike down into the grove, then a nature hike around the grove and trees.  One of the trees was carved out in the early 1900s to attract more tourists.  They invited them to bring their cars down there and drive thru the giant tree.  Not anymore, but we were able to walk thru the tree, and the road they once drove, makes for a nice wide hiking path, which was nice for the steep hike up and out of the grove. 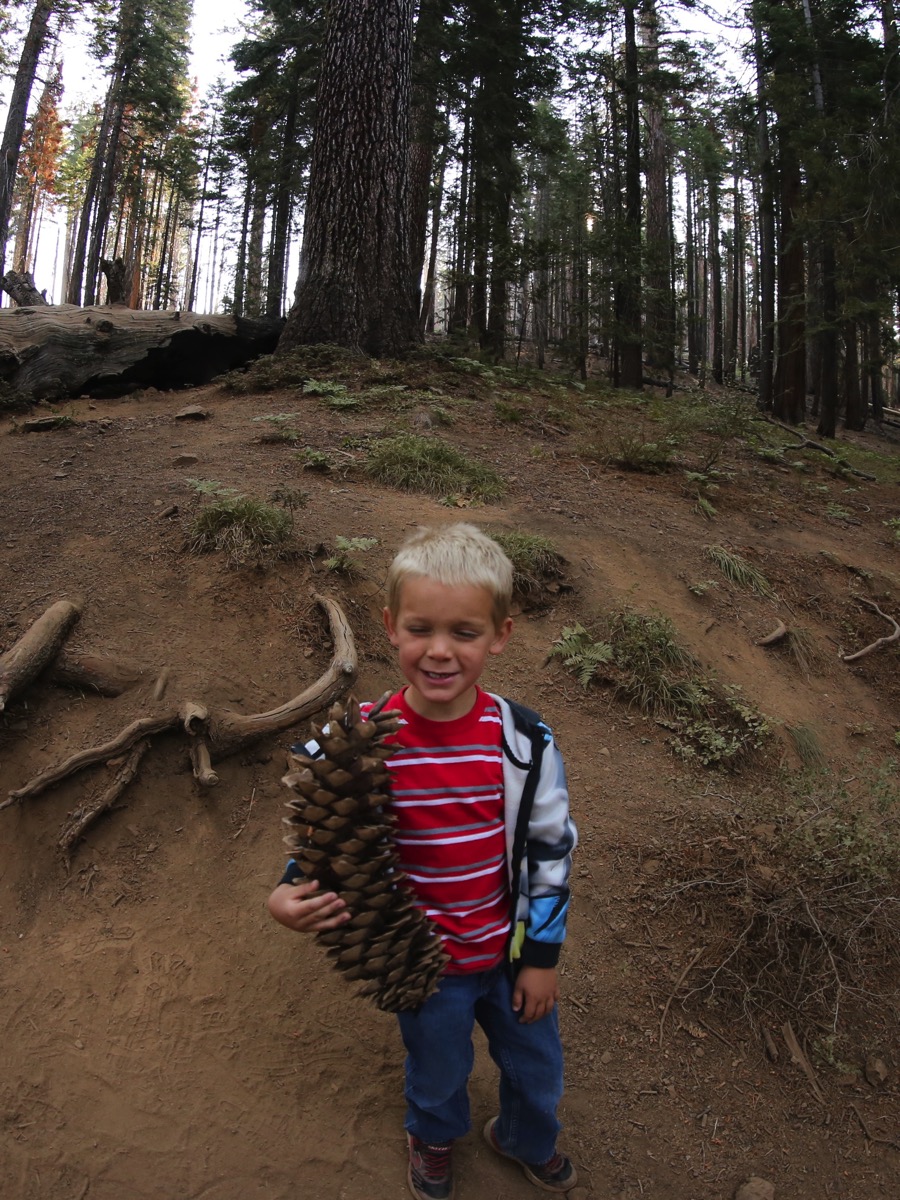 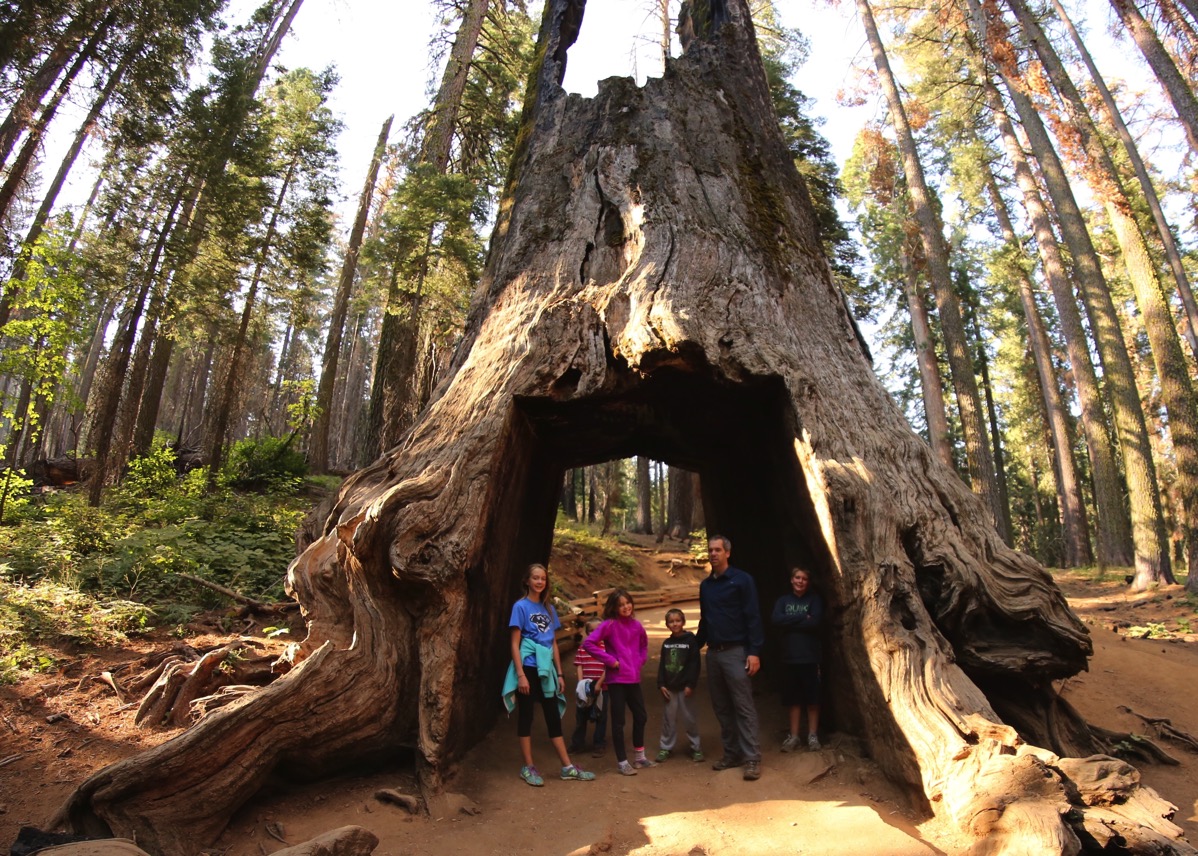 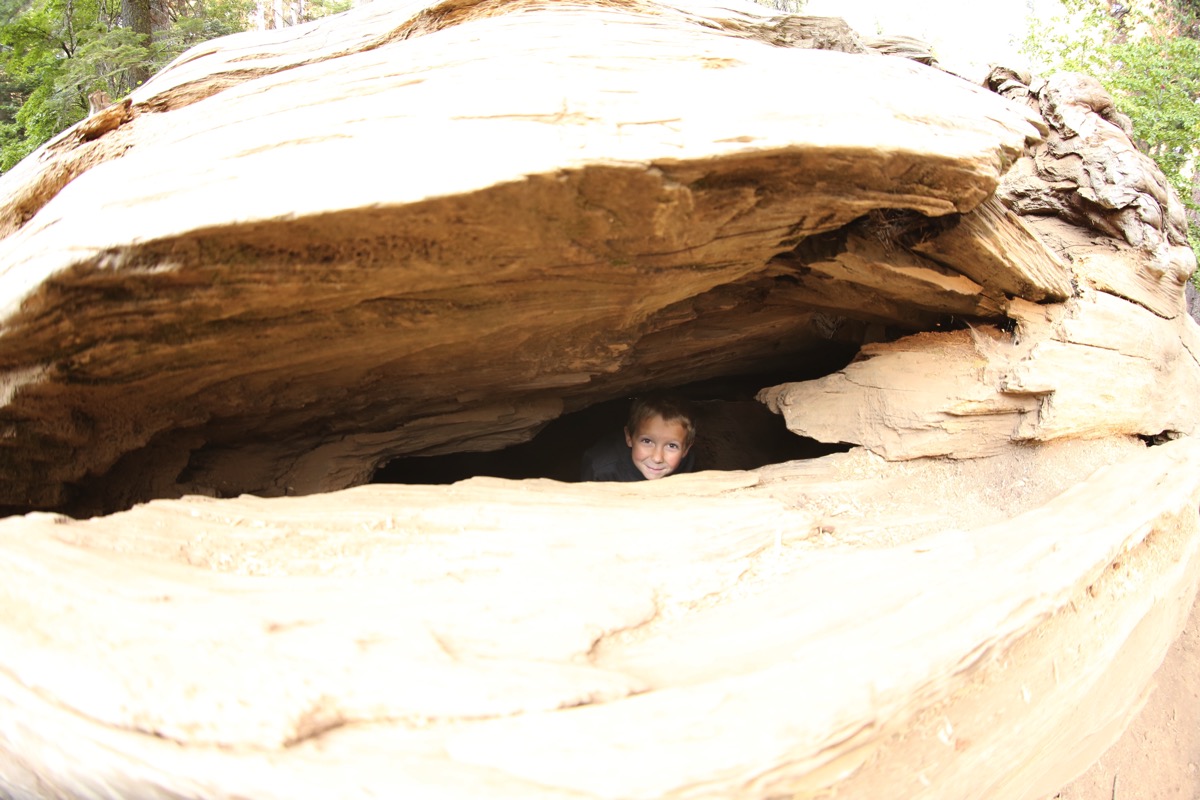 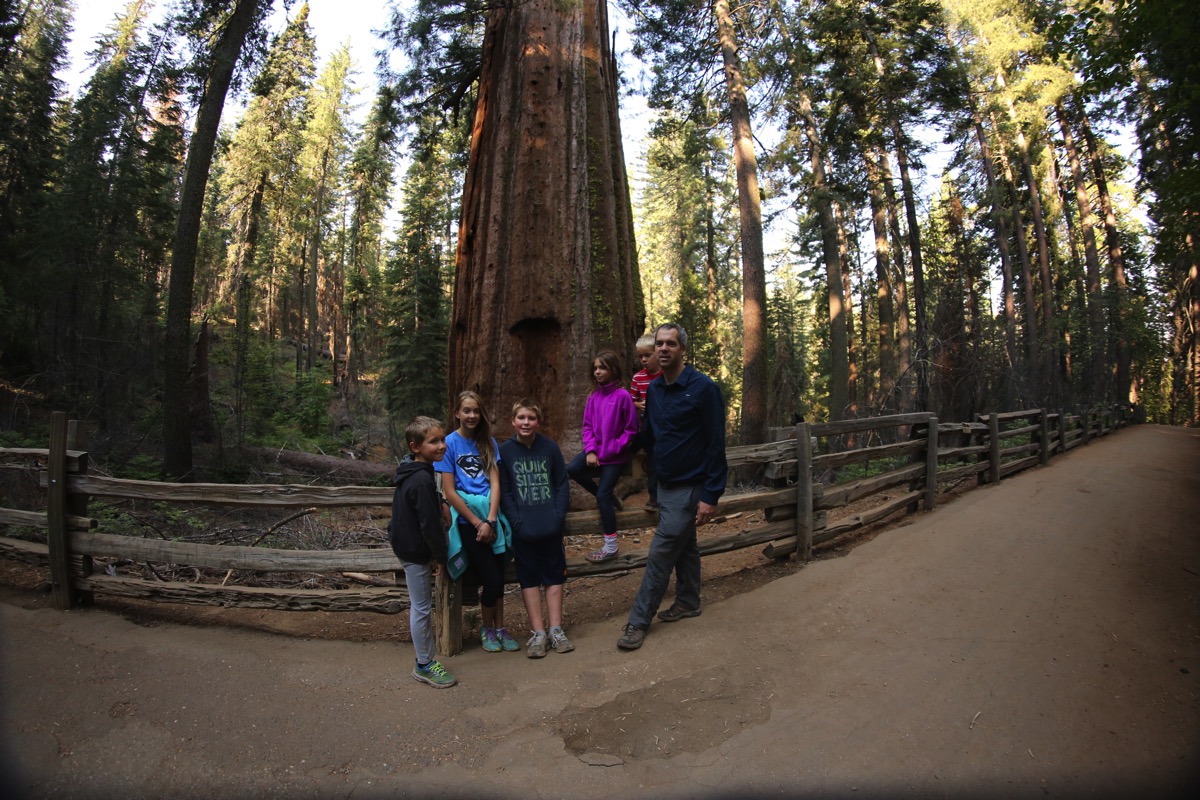 The drive from here to the parks east boundary was quite beautiful passing valley overlooks, lakes, and meadows.  We stopped at Olmsted point and did a short hike- well those of us willing to get out of the van.  Matthew had a great time hiking on the granite rocks, and climbing.  The view of half dome and nearby peaks was quite pretty. 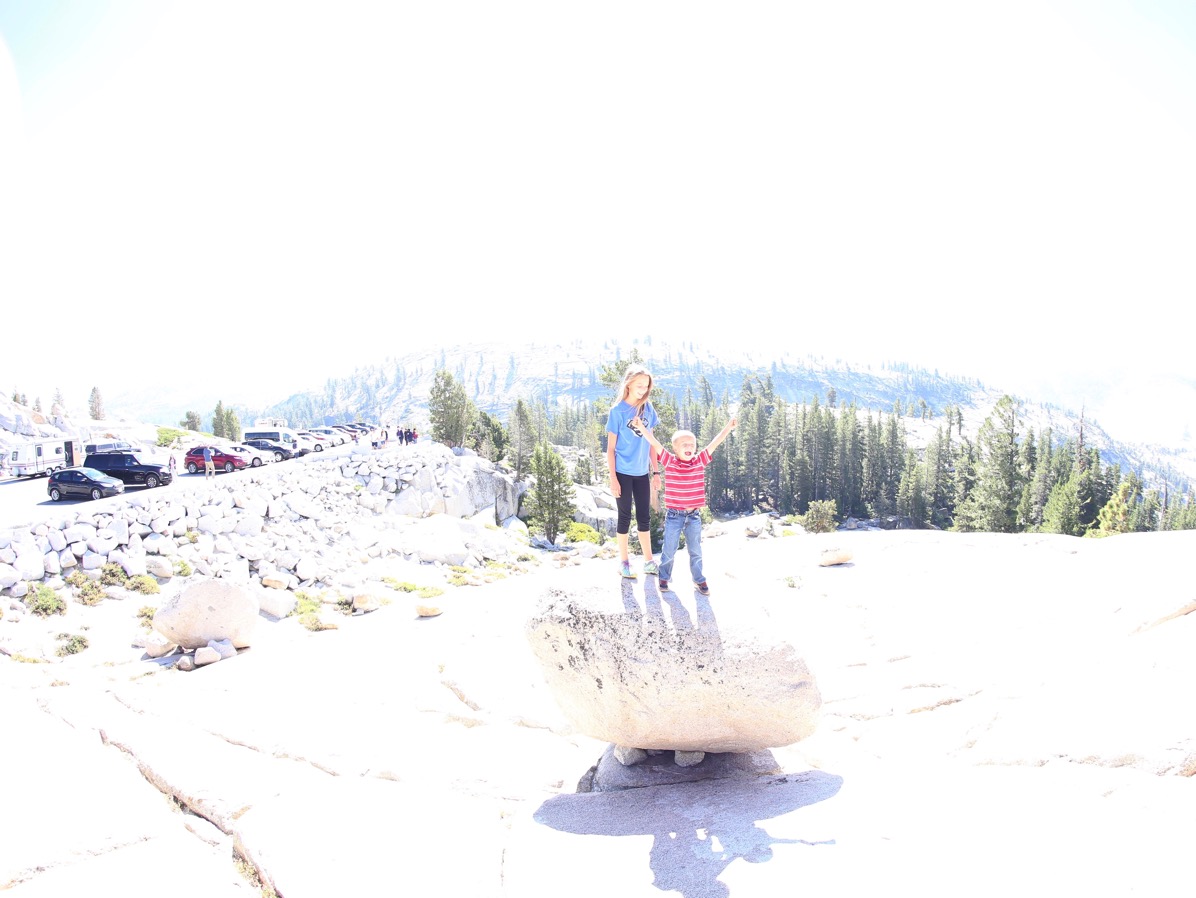 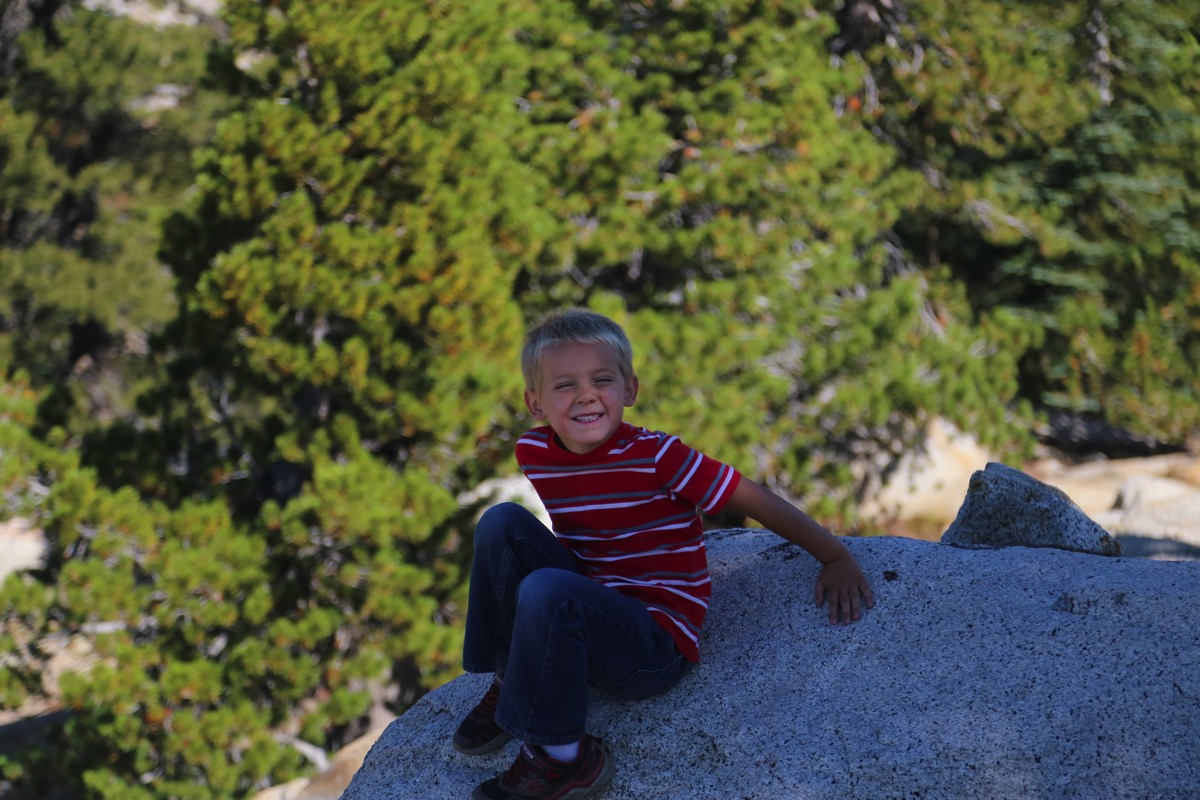 As we passed thru the one booth entrance on the north east corner of the park, we couldn’t help but count the line of cars.  It was now lunch time, and there were more than 50 cars lined up to get into the park.  My lesson here is arrive at the park entrances either before 10am or after 4pm.  Or you may wait in a very long line and never find parking.

After exiting the Park it was a 7 hour drive back thru the deserts of California and Nevada to home.  Not much in the way of scenery, but at least we had something good to listen to!  I didn’t realize Yosemite was as close as it is.  I could totally see making a 3 day weekend trip back here to see more.  There is a campsite at the Northeast entrance, with a reservation there, it would be totally doable to take off around 2 or 3 pm, and arrive by  9 or 10pm.  Set up camp, and hike and enjoy the park for 2 full days, drive home on the 3rd.  David loved Yosemite, said it was his kind of beauty.  So I guess we will have to come back again. 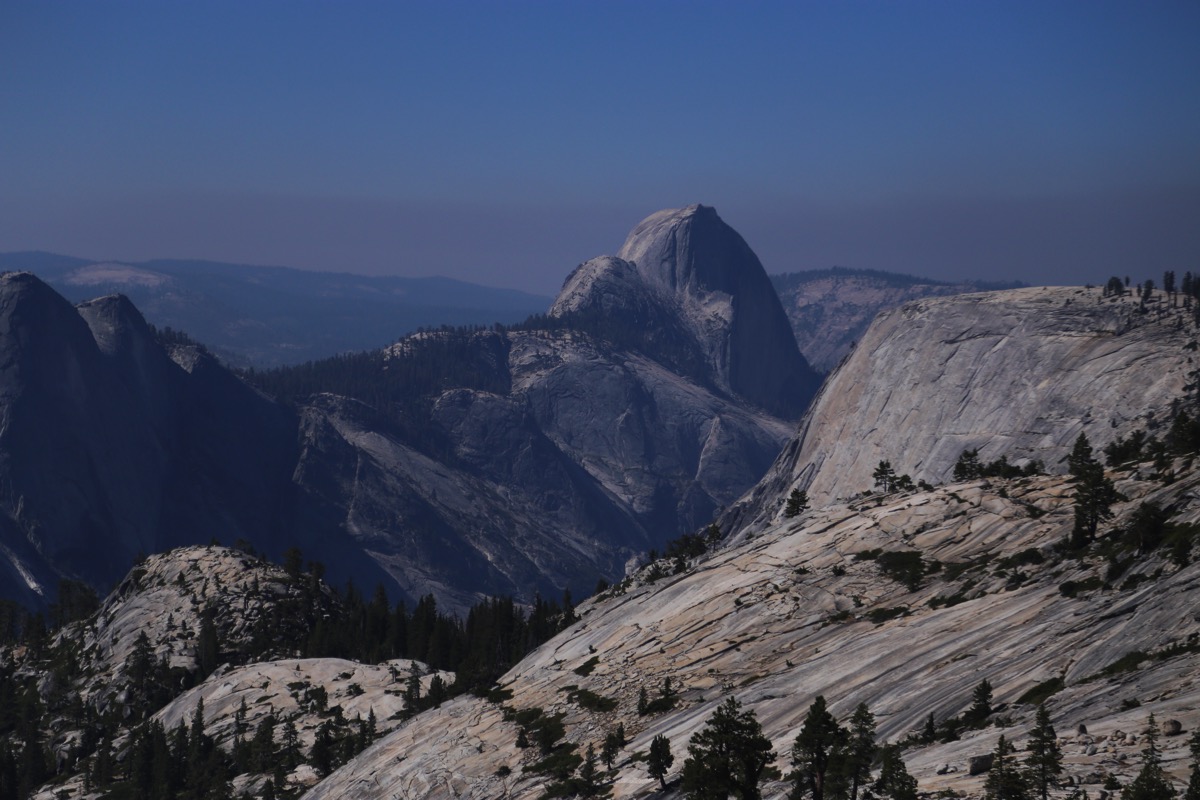